Championship leaders Norwich failed to match a club record of 10 successive league wins as plucky Blackburn came from behind to grab a well-deserved 1-1 draw at Carrow Road.

The Canaries looked on course for another victory when Kenny McLean scored a well-taken goal eight minutes into the second half.

But Rovers were always in the game and were rewarded for an impressive display 13 minutes from time as substitute Sam Gallagher headed home a free-kick from fellow substitute Harvey Elliott.

It was a welcome boost for the visitors after a poor run of form and only a minor setback for the leaders, who are still eight points clear at the top with eight games to play. 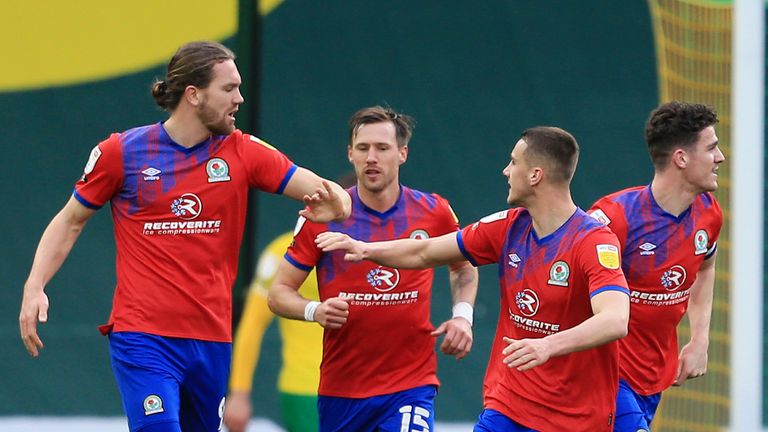 Blackburn gave a good account of themselves in the opening period without seriously testing Norwich keeper Tim Krul.

They knocked the ball around nicely for a side with just one win in 11 games but all too often promising moves came to nothing and their only shots on target, from John Buckley and Corry Evans, were straight at the keeper.

By contrast, the runaway leaders were some way below their best but still managed to carve out the better chances.

After just six minutes, an incisive move down the middle ended with a Todd Cantwell shot taking a wicked deflection off Darragh Lenihan before hitting the outside of the upright.

There was another close shave for Rovers after 36 minutes when Kieran Dowell cut the ball back for Emi Buendia, whose deflected effort was tipped onto the crossbar by an alert Thomas Kaminski.

Norwich top scorer Teemu Pukki finally had his first sight of goal after 52 minutes after chasing a long ball, with Kaminski sticking out a leg to divert his low shot just wide – but the Canaries did take the lead in their next attack.

Buendia set up the chance by picking out McLean in a central area and the Scotland midfielder played a beautiful one-two with Dowell before stroking the ball home from 15 yards.

Substitute Marco Stiepermann tested Kaminski from distance as Norwich looked for a second goal to wrap up the points.

But Blackburn were still very much in the game and deservedly got back on level terms 13 minutes from the end.

Cantwell gave away a free-kick in a dangerous position and Elliott clipped the ball to the back post where Gallagher was on hand to power a header past Krul.

The Canaries suffered another blow when defender Ben Gibson was stretchered off with an ankle injury but nearly restored their lead four minutes from time when a goalbound effort from Pukki was superbly blocked by Lenihan.

Kaminski also did well to foil Buendia from close range as the leaders had to settle for a point.