Daniel Bentley’ superb display helped Bristol City notch up a fourth consecutive win with a 2-1 success at Nottingham Forest and heap more pressure on Sabri Lamouchi in the process.

City keeper Bentley made outstanding saves to deny Alex Mighten, Cyrus Christie and Lyle Taylor, as Forest looked for the win manager Lamouchi needed to end questions about his future.

But early goals from Andreas Weimann and Nahki Wells were ultimately enough to keep Dean Holden’s side flying high in the Championship, with Luke Freeman’s spectacular strike giving Forest hope, but not much more.

Forest might have taken the lead as new signing Nicholas Ioannou crossed brilliantly for Mighten, who connected powerfully with a header, only to see Bentley make a superb save.

It was Bristol City who were to break the deadlock with their first meaningful attack, however, as two former Derby players combined.

Chris Martin cut the ball back from the right and found Weimann in acres of space 10 yards out, from where he was able to calmly guide the ball inside Brice Samba’s left-hand post. 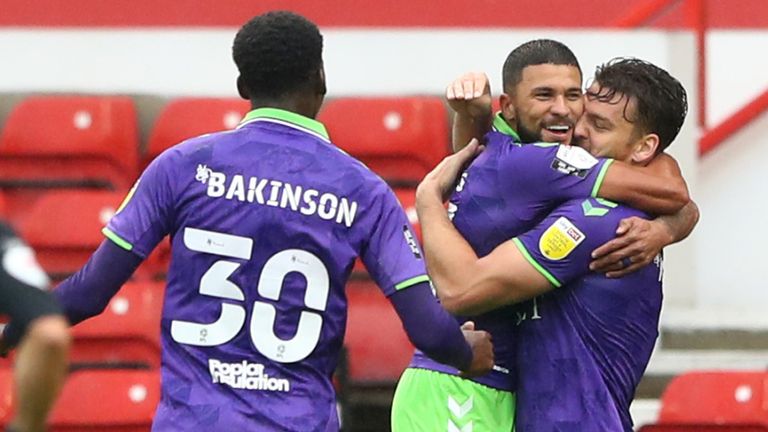 When Harry Arter’s driven shot was spilt by Bentley, it looked for a second as though Lewis Grabban would score an equaliser, but the ball would not drop for him amid a furious goalmouth melee.

Forest were left with a mountain to climb in the 22nd minute, when Martin’s second assist of the game – this time a header – set up Wells to find the back of the net with an acrobatic shot on the turn.

The hosts had not scored a goal in their first three Championship games having inexplicably dropped out of the play-offs on the final day of last season, and the prospect of needing to score three to collect their first victory of the campaign felt unlikely.

But their first goal was not long in coming and, when it arrived, it was a spectacular way for Forest to break their duck, as former Robins player Freeman collected the ball just outside the box, before sending a rasping, unstoppable shot across goal and inside the far post.

Forest were suddenly back in it, with Grabban twice coming close with a low, deflected shot and a header from the resulting corner.

Arter drove a low shot well wide as Forest began their hunt for an equaliser after the break. Grabban headed a great chance wide following good work from Freeman.

Christie almost scored a fine individual goal after pushing forward from right back, riding two or three challenges and hitting a powerful long-range drive that Bentley kept out brilliantly.

Bentley made another crucial save as substitute Lyle Taylor hit a shot on the turn, which the keeper bravely smothered at his feet. Taylor flashed a shot across goal and wide as the clock ticked down.

Antoine Semenyo almost killed off the game in injury time for City, but Samba made a good save.

Nottingham Forest’s Sabri Lamouchi: “Yes, there were positive signs today – but not enough. Because the result is negative one more time. It is one more day, one more game, one more bad result, with the same mistakes.

“After the second (Bristol) goal we started to play. We got back in the game and the second half was the opposite. I don’t know why we play only when we need a reaction and not from minute one.

Bristol City’s Dean Holden: “We wanted to get on top of Forest early and avoid complacency, so to go 2-0 up was brilliant, with two good finishes and two really good assists from Chris Martin. Then we switched off from a throw in and they created a few chances, which changed the momentum of the game.

“This was a real test and I am pleased we have come under this pressure, because in any successful season you are going to need to be able to stand together; fight together under that kind of pressure and come through it.”