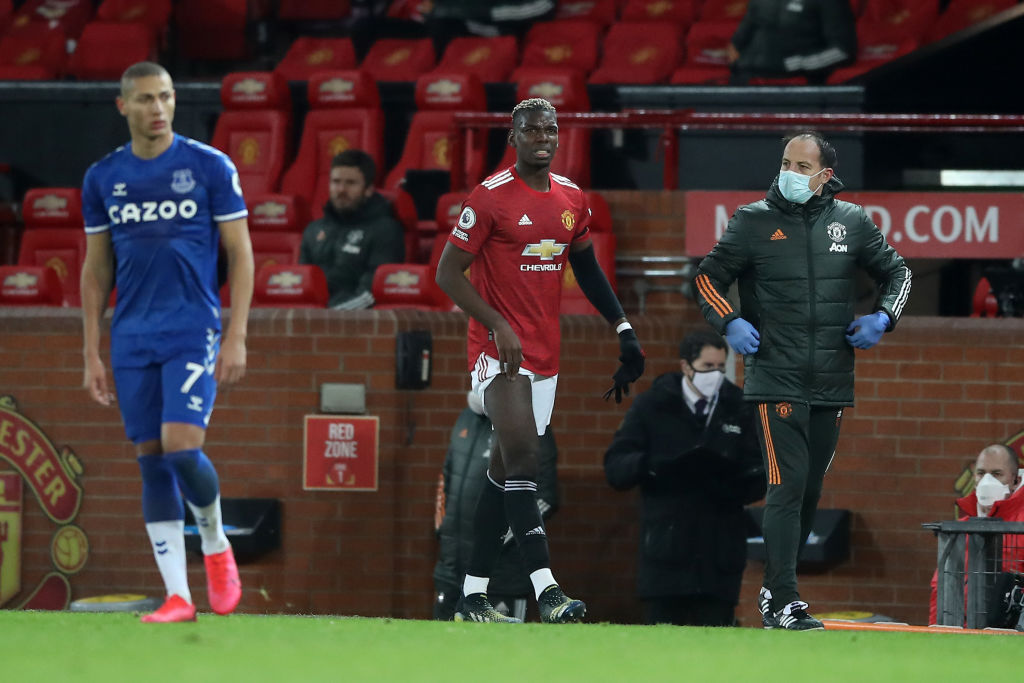 Ole Gunnar Solskjaer confirmed Paul Pogba was set for a scan on his suspected thigh injury after the midfielder was forced off in Manchester United’s extraordinary 3-3 draw with Everton.

Scott McTominay looked to have secured victory as he restored United’s lead with a 70th-minute header but Dominic Calvert-Lewin had the final say with a last-gasp equaliser for the visitors and Pogba’s injury just added to Solskjaer’s woes.

United were cruising as Bruno Fernandes doubled their advantage with a sublime long-range effort on the stroke of half-time after Edinson Cavani’s opener.

But Abdoulaye Doucoure and James Rodriguez struck in the space of three minutes shortly after the break to set up a tense finish which saw Carlo Ancelotti’s men rescue a point.

Pogba’s injury towards the end of the first half compounded frustration, with Fred coming on to replace the Frenchman for the remainder of Saturday evening’s dramatic Premier League clash.

Speaking to BBC Sport after the draw, a frustrated Solskjaer told BBC Sport: ‘We deserved to win the game but that is football for you, you have to take your chances and cannot concede with every shot.

‘First half I did not feel we played particularly well but scored two fantastic goals, you go in at the break 2-0 up feeling we have not hit where we could do.

‘After 2-2 we played really well then the last kick of the ball kicks us in the teeth and go home disappointed.’

Asked for an update on Pogba’s injury, the Norwegian explained: ‘Paul could not carry on.

‘[It was] a muscle injury and he will have a scan in the morning to see how he recovers.’

Solskjaer hopes supporters are able to take encouragement from their spirited performance despite the fact Manchester City now lead them in the table by two points and have two games in hand.

‘We have to focus on improving as a team, we are scoring more goals, creating chances and you felt you dominated the game and should have won it,’ he continued.

‘The fans can see we are team that is trying to go for it, even at 3-2 up we wanted to get the fourth.’