Joao Pedro won and then converted a penalty to give Watford a 1-0 win at Preston in a game more entertaining than the solitary goal suggested.

The Brazilian forward was brought down by Tom Barkhuizen and stroked home the spot-kick to make it back-to-back league wins for the Hornets, who move up to third in the Championship table.

Preston’s struggles at home continue, picking up 14 points from 15 games at Deepdale and scoring just 11 goals.

Watford started well and chances fell to Pedro and Ismaila Sarr but both managed to miss the target. 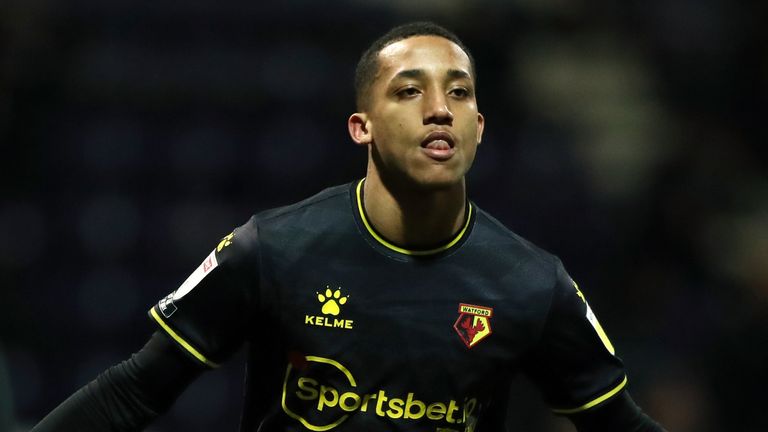 The hosts were less expansive but still creative, evidenced by Ben Whiteman’s delightful ball to lone striker Ched Evans. He brought the ball down well but blazed over with just Daniel Bachmann to beat.

A downpour a couple of hours before kick-off had produced a slick surface, with both sides fizzing the ball around.

Evans was looking lively and he fired wide after creating an opportunity for himself, having gone past two Watford defenders. He claimed he was clipped as he drew back to shoot but referee Tony Harrington disagreed.

Chances began to come at a premium as Watford’s Will Hughes’ long-ranger was deflected over but aside from that it seemed both teams had worked each other out.

Neat footwork created the situation that led to the spot-kick awarded by referee Harrington shortly after the break.

Adam Masina and Ken Sema combined to slip a pass to Pedro who had his heels clipped by Barkhuizen.

The inevitable Preston protests came, but to no avail and Pedro himself went searching for the ball, took responsibility and rolled his penalty into the bottom corner.

The deadlock had been broken and Alex Neil’s side were left with a problem.

With only one goal at home in the last three games and two golden opportunities already gone begging it looked like an uphill battle.

They tried to respond when Liam Lindsay headed Daniel Johnson’s corner just over the bar and Barkhuizen then made a mess of a cross when in a great position.

But as they came forward they left holes at the back, with Nathaniel Chalobah playing a slide-rule pass to full-back Kiko Femenia but he fired wide.

Watford captain Tom Cleverley then struck a free-kick just over the bar.

Struggling for creativity as the game progressed, Neil introduced Everton loanee Anthony Gordon, who brought a new threat from dead-balls. One free-kick fell to Lindsay who poked wide.

But the Hornets successfully quelled any sting in the tail of the team in white, professionally closing the game down, giving themselves a clean sheet and keeping their promotion push in full flow.