Rangers were not at their best at Ibrox but they remain relentless in their pursuit of the title, with the game turning on referee Bobby Madden decision to send off Bitton for a professional foul after 62 minutes as he tussled with Alfredo Morelos.

By then, Rangers keeper Allan McGregor had produced several saves to ensure the hosts remained level with their fierce rivals, but eight minutes later, Steven Gerrard’s men went in front as the unfortunate McGregor deflected James Tavernier’s corner into his own net.

They would be no late drama as Rangers moved 19 points clear at the top of the Scottish Premiership, although second-placed Celtic still have three games in hand. Man of the match: Allan McGregor.

The balance of power shifting in Scotland

Neil Lennon told Sky Sports before kick-off that defender Christopher Jullien would be out for “three to four months” with a knee injury sustained in the victory over Dundee United on Wednesday.

Then, following a poignant tribute to mark the 50th anniversary of the Ibrox disaster, the visitors began the stronger.

Sky Sports co-commentator Andy Walker described Lennon’s selection as a “team designed to win”, and Odsonne Edouard had his first sight of goal inside three minutes when he ran onto Callum McGregor’s pass and drew a fine save low down by Allan McGregor. 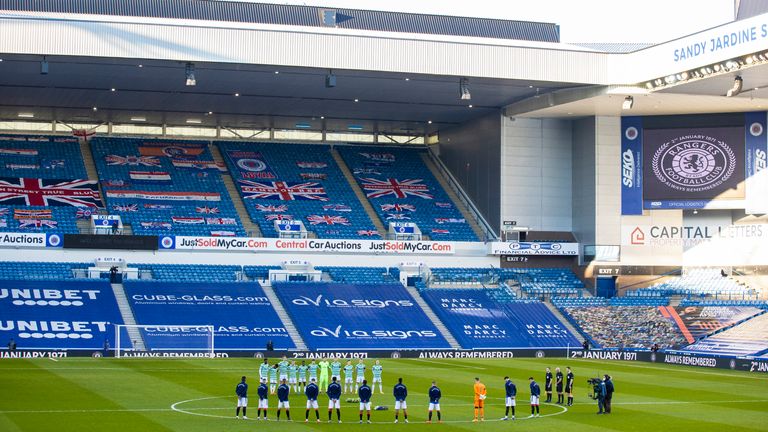 Three minutes later, a poor headed clearance by Leon Balogun was intercepted by David Turnbull, whose cross was swept towards goal by Leigh Griffiths and McGregor was once again drawn into action, tipping over the rising shot.

Celtic had won five of their previous seven visits to Ibrox, and the defending champions continued to ask more questions as McGregor watched his shot whistle past the post. Rangers were struggling to impose themselves against the high energy of Lennon’s men, with Alfredo Morelos failing to connect with Joe Aribo’s low cross.

When the teams met in October, Celtic didn’t register a shot on target, but they were making up for it here as Griffiths saw another precise shot tipped spectacularly onto the post by McGregor. The only disappointment for Lennon in the opening half an hour was that his side hadn’t capitalised on their dominance as Turnbull slipped Griffiths through again but Connor Goldson did just enough to put the forward off his wayward shot.

Rangers, who had won each of their previous 13 league games, were lacklustre and sloppy in possession as they failed to test Vasilis Barkas in the opening half. Celtic clocked up 11 attempts in the first 45 minutes alone – more than any opponent Rangers faced across 90 minutes in any previous league game this season, with Nir Bitton’s glanced header drifting just wide just before the interval.

There had been plenty of cause for concern for Steven Gerrard, whose side had failed to muster a single shot on target, and the Rangers boss turned to his bench at the restart as Ianis Hagi replaced the ineffectual Kemar Roofe. Hagi underlined his capabilities within five minutes as he collected James Tavernier’s pass, chopped inside Ismaila Soro and flashed a shot wide of Barkas’ right-hand post. The hosts’ marginal improvement continued as Kristoffer Ajer closed the door on Morelos with a last-ditch challenge.

But a sixth red card in the last seven Old Firm derbies swung the pendulum in Rangers’ favour as Bitton was caught the wrong side of Morelos from Tavernier’s measured pass, with Bobby Madden in no doubt the makeshift centre-back was the last line of defence prior to him wrestling the Colombian to the ground. Rangers very nearly took full advantage from the resulting set piece as Goldson and Hagi were unable to convert Tavernier’s delivery. Lennon brought on Shane Duffy, who was in the right place to deflect Borna Barisic’s inches wide – but Rangers edged in front from the corner that followed.

Tavernier’s front-post delivery was flicked on by Aribo and McGregor inadvertently headed beyond the stranded Barkas from close range.

The sending off had transformed the game as Celtic sought to breach the Rangers defence for only a sixth time this campaign, and substitute Mohamed Elyounoussi’s snap-shot from range failed to trouble McGregor. 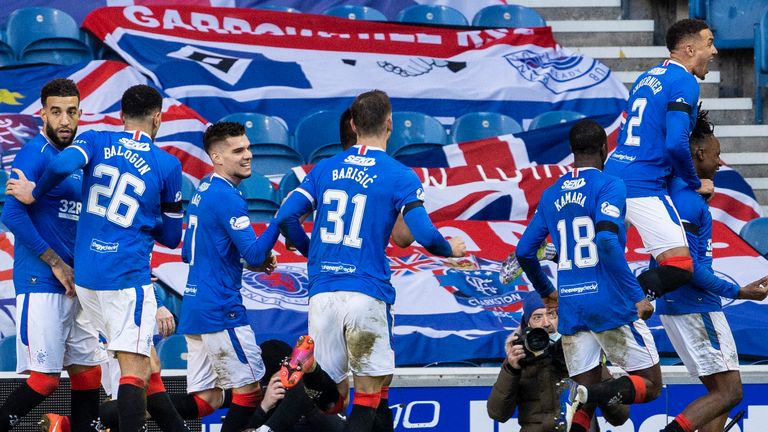 With the prospect of falling further behind their fierce rivals in the quest for a 10th Scottish Premiership title, Celtic began to look ragged as the hapless Duffy’s panicked clearance nearly presented another opening for Ryan Kent before substitute Cedric Itten saw a fine effort narrowly clear the bar.

But there was no late twist meaning a 14th straight league win for Rangers, who now sit in a formidable position with Lennon’s hopes of his side clinching an unprecedented 10 titles in a row hanging by a thread. Celtic now head to Dubai for some warm weather training, but the sun may have set on their pursuit of history.

Player reaction: ‘The boys dug it out well’ Allan McGregor hopes Rangers have taken a major step towards the Premiership title with their 1-0 victory over Celtic.

The Light Blues number one told Sky Sports: “Hopefully in five months’ time it will be a huge win. I thought we were really, really poor in the first half and the 15 minutes before the sending off occurred.

“We were a wee bit better after that but the win is the most important thing. I’ve no idea why but they looked hungrier first half but we managed to get the win.

“I wasn’t annoyed at having to be so busy. It’s part and parcel of the game, you need to focus and be ready for anything that is thrown at you.

“But I was annoyed at how bad we were. I keep repeating myself, the win is the most important thing.

“The boys dug it out well. If you go back to Walter’s (Smith) era, he was really good at that but that comes from the players and the messages the manager gives to us to carry out.”