Rangers 5-0 Dunfermline Athletic: Steven Gerrard’s side thrash second-tier side in Scottish League Cup second round, with a double from Kemar Roofe in five-star performance

As a horror early season period for Rangers drew to an emphatic close, Friday the 13th was fright night only for Dunfermline.

Twisting the knife in this utterly ruthless disposal of the Pars by Steven Gerrard’s second string side was John Lundstram, Scott Wright, Ianis Hagi and Kemar Roofe in 30 murderous minutes in the first half. Roofe added another from the spot for five star Rangers after the break.

Those goals saw Rangers coast into the last eight of the Premier Sports Cup but also ensured the under-pressure Scottish champions avoided a fourth consecutive defeat for the first time in 36 years. 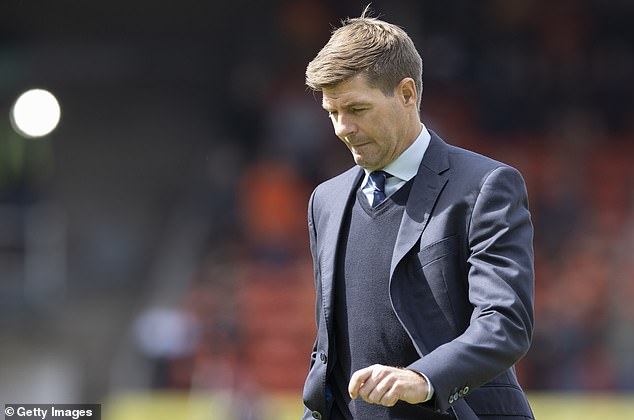 Back in 1985, under Jock Wallace, the Ibrox side lost 1-0 and 3-0 at home in the league to Dundee and Aberdeen respectively either side of a 2-0 defeat away to Hibs in the first leg of their League Cup semi-final at the end of September. They were then eliminated from Europe, losing 2-0 to Osasuna in Pamplona in the Uefa Cup.

But there was zero chance of Peter Grant’s Championship Pars adding to the recent home and away losses to Malmo and a 1-0 defeat at Dundee United despite Gerrard making eight changes from Tuesday’s costly £30million Champions League exit.

Only the ever-present Connor Goldson, Joe Aribo and Scott Wright survived from the 2-1 home loss to the 10-man Swedish champions.

Among those dropping to the bench was Alfredo Morelos, whose posting of his goal against Malmo on social media in the wake of a painful defeat looked like he was placing himself front and centre in the shop window.

Gerrard admits he expects players sales as a financial consequence of missing out on a Champions League windfall and his Colombian forward would bring in a sizeable sum.

Sitting in the directors box last night was Dunfermline legend Jim Leishman, the last Pars player to score the winning goal at Ibrox. Within three minutes it became clear he would be keeping that title that has lasted since 1972. 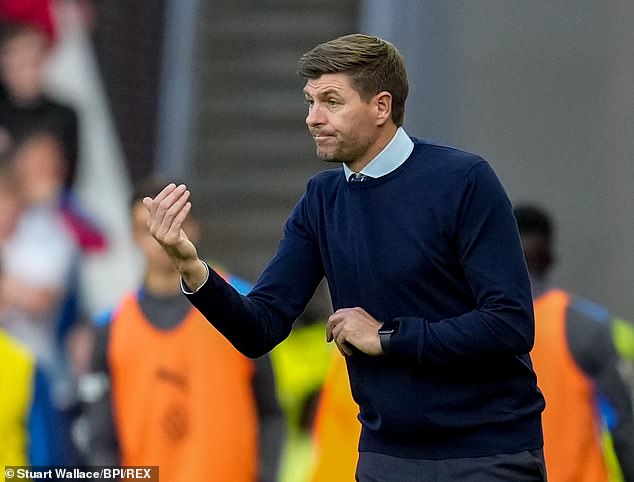 Former Rangers attacker Graham Dorrans lost possession with a misplaced pass and Calvin Bassey made him pay dearly as he drove down the left flank before picking out Lundstram 10 yards from goal.

The former midfielder steered a lovely finish past Deniz Mehmet which found the back of the net via the underside of the bar. Dunfermline needed to keep it tight for the opening stages and they should have expected better from the veteran Dorrans.

The Pars soon fell further behind after Glen Kamara picked out Hagi in the middle of the park and his superb pass through the visiting defence allowed Wright to bear down on goal.

The former Aberdeen attacker made no mistake, finishing emphatically beyond Mehmet. It was three within 120 seconds when Bassey’s superb deep cross at the back post found Hagi who nodded home from close range.

Rangers had confidence flowing through their veins and Roofe tried his luck with a curling shot that dipped over the crossbar.

And it took a quite breathtaking save from Dunfermline keeper Mehmet to stop Nathan Patterson making it 4-0 with a blockbusting shot after yet more fine work down the left from Bassey.

But Dunfermline couldn’t hold back the river and Roofe finally got on the scoresheet. A lovely piece of interplay between Kamara and Aribo ended with the striker blasting ferociously past Mehmet.

Man of the Match: Calvin Bassey.

Dunfermline had been lucky to get to the break 4-0 down and boss Grant made two changes at the interval. Off came Kevin O’Hara and Kyle MacDonald and on came the experienced duo Ryan Dow and Dom Thomas. But the experienced Dorran’s evening was to get worse when he fouled Roofe in the box.

The Rangers striker slammed the penalty past Mehmet for five. As he roared into the skies above Glasgow it was an emotional end to a difficult week for Roofe, whose baby son Cassius was treated in hospital for bronchiolitis and a chest infection before being discharged.

With Rangers now five up, on came Morelos, to a rapturous reception from the Ibrox crowd. The Colombian international nearly made it six but his fierce drive flew just past the left hand post. Morelos then came close with another ferocious shot that was deflected behind for a corner.

Roofe must have thought he had grabbed a hat-trick late on but Mehmet dived to clutch his 20 yard shot. Despite the entire second half being played in the Dunfermline half there was to be no further scoring.

In a fine all-round team display, Roofe, Hagi and man-of-the-match Bassey staked the strongest claims to keep their place in the starting line-up for next Thursday’s Europa League qualifier first leg at home to Armenian side Alashkert.

The much-criticised Lundstram also had his best match in a Rangers jersey since his summer arrival from Sheffield United.

Glen Kamara shone as usual on his return from his European suspension and he was afforded a standing ovation when replaced by youngster Stephen Kelly 12 minutes from time.

All that must be offset against the fact the Ibrox side were playing against hugely limited opposition, who never even looked remotely like troubling Jon McLaughlin in the home goal.

Booed off on Tuesday, the Rangers fans who stayed until the end showered their side only with affection. Gerrard will now be hoping this showing will prove the spark that electrifies his side after their sluggish start to the season.

The ex Liverpool and England captain, of course, is yet to win a domestic cup as Rangers manager. So far his teams have fallen to Aberdeen (twice), Celtic, Hearts, St Mirren and St Johnstone.

The Ibrox boss will find out the latest team to stand in his way of his quest for Premier Sports Cup silverware when the quarter final draw is made on Sunday after Celtic host Hearts at Parkhead in the final tie of the last 16.