Robert Lewandowski scored four times, including an injury-time penalty, as Bayern Munich edged out Hertha Berlin 4-3 in the Bundesliga.

Lewandowski had Bayern 2-0 ahead after 51 minutes before Jhon Cordoba (59) and Matheus Cunha (71) restored parity.

Bayern were back in front when Lewandowski completed his hat-trick five minutes from time, but Jessic Ngankam levelled almost immediately with a bullet header.

There was one final twist, however, as Lewandowski was brought down in the first minute of injury time and the Poland striker converted for the most dramatic of wins.

Augsburg extended their unbeaten start to the season to three matches by holding winless Wolfsburg to a goalless draw.

Serie A: Napoli no-show at Juve 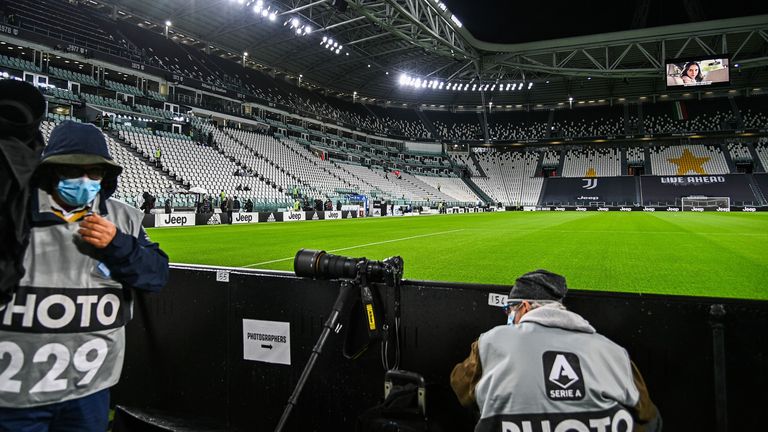 Juventus’ Serie A game with Napoli descended into farce as the visitors failed to turn up after their squad was placed in isolation.

Napoli did not travel to Turin after two positive coronavirus tests at the club and now face being handed a 3-0 loss by Serie A.

The local health authority in Naples released a statement on Sunday afternoon insisting “there were not the necessary conditions to allow for Napoli to travel in full safety”.

Serie A had earlier stated that Napoli could not prove their inability to play the game and refused to call the game off.

In bizarre circumstances, Juventus’ players arrived at the Allianz Stadium around an hour before kick-off.

A few minutes later, the club’s starting XI was named through their official social media account, the team including Wales midfielder Aaron Ramsey and Cristiano Ronaldo. Atalanta top Serie A after beating Cagliari 5-2 – Luis Muriel, Papu Gomez, Mario Pasalic, Duvan Zapata and Sam Lammers were on target – and AC Milan are second, also with nine points from three games, after a 3-0 home victory over Spezia.

Lazio and Inter Milan were both reduced to 10 men in their 1-1 draw, and Benevento and Parma recorded respective 1-0 wins over Bologna and Hellas Verona. Philippe Coutinho and Luuk De Jong traded early goals as Barcelona were held to a 1-1 draw by Sevilla in La Liga.

De Jong struck after only eight minutes to get Sevilla off to a flying start, but his effort was cancelled out by Coutinho just two minutes later and the two sides remain unbeaten.

Vinicius Junior and Karim Benzema scored as Real Madrid claimed their third consecutive league win with a 2-0 victory at Levante.

Vinicius struck in the 16th minute when he curled in after a corner, while Benzema added a second in the fifth minute of stoppage time.

Facundo Roncaglia and Jonathan Calleri scored either side of the break as Osasuna beat Celta Vigo 2-0, while Cadiz and Granada drew 1-1.

Ten-man Alaves survived the late dismissal of Ruben Duarte to beat Athletic Bilbao 1-0 for a first win of the season. Rodrigo Ely scored the 74th-minute winner.

Ligue 1 leaders Rennes were held 2-2 by Reims. Yunis Abdelhamid (11) headed Reims in front, but Raphinha (24) and Damien da Silva (37) put Rennes ahead before Boulaye Dia (66) earned the visitors a point.

Lille are level on points with Rennes after Zeki Celik, Renato Sanches and Burak Yilmaz scored in a 3-0 win at Strasbourg.

Nimes took the derby spoils with Renaud Ripard on target in a 1-0 win at Montpellier, Brest beat Monaco 1-0 and Bordeaux claimed their first home win since January 2020 with a 3-0 victory over Dijon.

Dimitri Payet was on target for Marseille after 16 minutes in their 1-1 draw at Lyon.

But Payet was sent off three minutes later for a reckless lunge at Leo Dubois and Houssem Aouar (28) equalised from the penalty spot.

ONE MILLION POUNDS! Can you imagine?

You read correctly. Do not miss your chance to scoop £1m for free in this week's Super 6 round. Play for free, entries by 3pm Saturday.