Sadio Mane has become the latest Liverpool player to pick up an injury with the winger missing from Jurgen Klopp’s team selection against West Ham. Mane looked back to his best this week with a brilliant performance in Liverpool’s 3-1 win over Tottenham.

He scored as well as providing an assist with the Reds picking up their first win since before Christmas.

But Klopp has been forced to rejig his squad for today’s clash against West Ham, who sit two points below Liverpool in the table.

Nat Phillips will partner Jordan Henderson in defence with both Fabinho and Joel Matip unavailable.

However, it’s further forward where the more surprising changes came about. 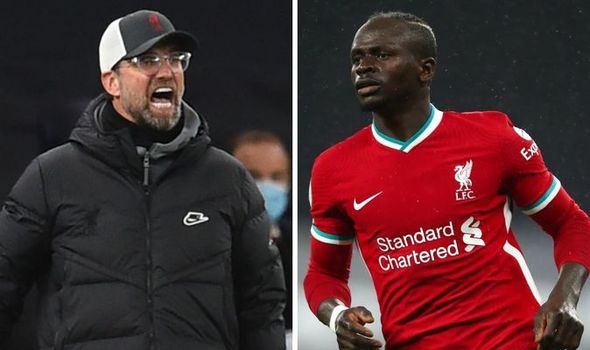 Roberto Firmino was dropped to the bench with Divock Origi given a chance to lead the line.

And Mane has been left out of the matchday squad altogether, with Xherdan Shaqiri given a rare start.

The Senegal international is said to be suffering from a muscle injury sustained after the Tottenham game.

It’s only the second league game Mane has missed this season having previously been unavailable in the 7-2 defeat to Aston Villa back in October due to testing positive for coronavirus.

Liverpool are describing Mane’s issue as a ‘minor muscle injury’, suggesting he could be back available soon.

And Klopp will be desperate to have his best players available when they take on Manchester City next weekend.

They currently occupy top spot in the Premier League, but Liverpool could cut the gap to their rivals to four points with a win over West Ham today.