A poor second-half performance cost Western Sydney Wanderers two points in Brisbane as they slumped to a disappointing 1-1 draw with the Roar.

An impressive performance from goalkeeper Daniel Margush at Dolphins Stadium ensured the Wanderers didn’t suffer a second successive defeat, with the 23-year-old making a string of fine saves in the second half to earn his side a point. 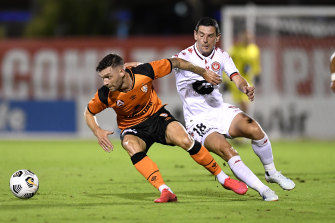 Jay O’Shea controls the ball under pressure from Graham Dorrans.Credit:Getty

The Wanderers looked on course for an easy win when former Brisbane youth product Kwame Yeboah opened the scoring early, but a lacklustre finish to the game meant they were grateful to come away with a draw against a side that hadn’t won in seven previous attempts.

Yeboah received a cut-back from midfielder Keanu Baccus inside the box and struck a powerful finish in the bottom corner to break the deadlock. He thought he had scored a second in the 37th minute. Yeboah hit the back of the net with another powerful finish past goalkeeper Jamie Young, but a late flag for offside cut short his celebrations.

The Roar fought back late in the first half and should have drawn level through striker Golgol Mebrahtu. A Corey Brown cross found Mebrahtu unmarked inside the box but his glancing header went narrowly wide.

The Roar went even closer immediately after the restart. Forward Joey Champness dribbled past two defenders to go one-on-one with goalkeeper Margush, but his skill on the ball wasn’t matched by his finishing and he fired straight into the onrushing goalkeeper.

Champness created the equaliser in the 49th minute. From another scintillating solo run, Champness set-up Riku Danzaki who rounded Margush to make it 1-1.

The Wanderers goalkeeper was their busiest player, pulling off another fine save to deny Mebrahtu moments later as Western Sydney’s back line eroded in the face of repeated attacking waves.

Western Sydney never came close to restoring their lead in the second half and struggled to create clear chances. Their evening was soured further by a yellow card for Scottish midfielder Graham Dorrans, which means he is suspended for next week’s match against league leaders Central Coast Mariners.