Yassine Bounou – 7: Could not be expected to keep out a fine Lukaku penalty, and – although Godin’s header was fairly close to the keeper – the second goal was difficult to stop, too. Denied Lukaku well one-on-one in the second half before making another good save late on.

Jesus Navas – 8: Provided a sharp cross for De Jong to level the score just minutes after Sevilla went behind. Was just as adept defensively, too.

Jules Kounde – 7: Did little wrong and made a goal-line clearance to deny Sanchez in the latter stages of the final.

Diego Carlos – 6: It was a game of two halves for the defender. Gave away his third penalty in as many games by fouling Lukaku early on and was lucky not to be sent off at that point. Produced a crucial block in the second half, though, before his deflected overhead kick beat Handanovic for 3-2.

Sergio Reguilon – 7: Nearly produced a moment of brilliance in the second half as he beat Godin in the Inter box before firing a shot off, but his effort splashed in the side netting.

Ever Banega – 6: Wasn’t as influential as he can be, his first clear contribution coming in the form of a booking as he cynically brought down Gagliardini just before half-time. Grew into the game, though, and did nearly assist Ocampos right on half-time.

Fernando – 7: Solid in the centre for Sevilla.

Joan Jordan – 6: Little to criticise in the midfielder’s case, though he was lucky not to be booked for tugging on Barella’s shirt.

Suso – 7: Deliveries were solid and the Spaniard wasn’t short on energy. 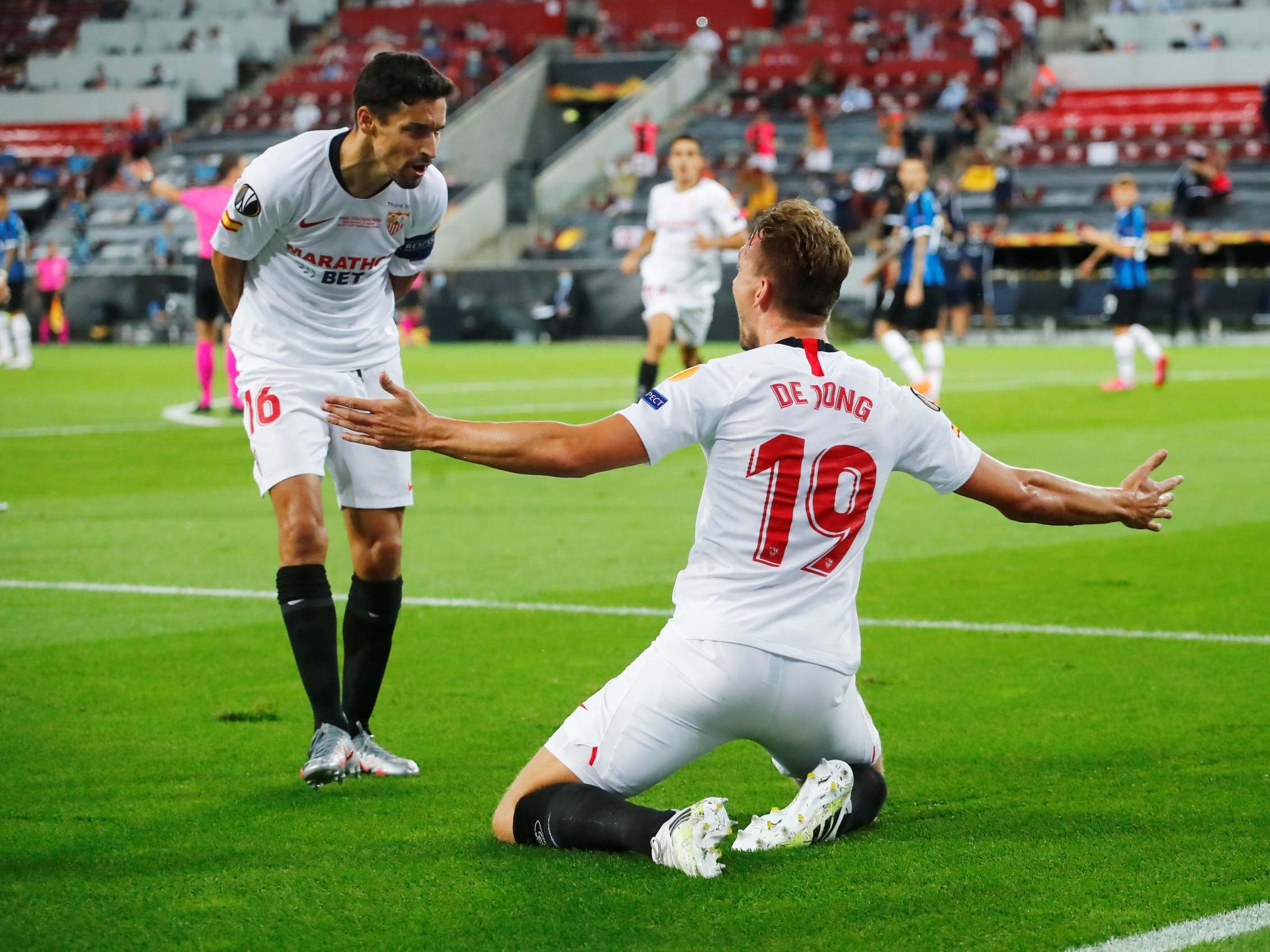 Luuk de Jong – 9: Two very different headers from the semi-final hero saw Sevilla come from behind to lead in the first half. Both were impressive finishes that justified the Dutchman’s spot in the starting line-up.

Lucas Ocampos – 8: Buzzed about for the Spanish side in the final third and wasn’t hesitant to get shots off when he could. So nearly scored with a flicked, long-range header on the stroke of half-time. Did this all while seemingly playing through some pain, too.

Samir Handanovic – 6: Could do little about any of the goals, though seeing Lukaku deflect the third into the net will have hurt.

Diego Godin – 7: Although he knows his way around a European final, the centre-back was out of sorts here and there, his age showing. The Uruguayan retained a decent rating by contributing a huge goal, however, when he headed in just moments after Sevilla took the lead in the first half. 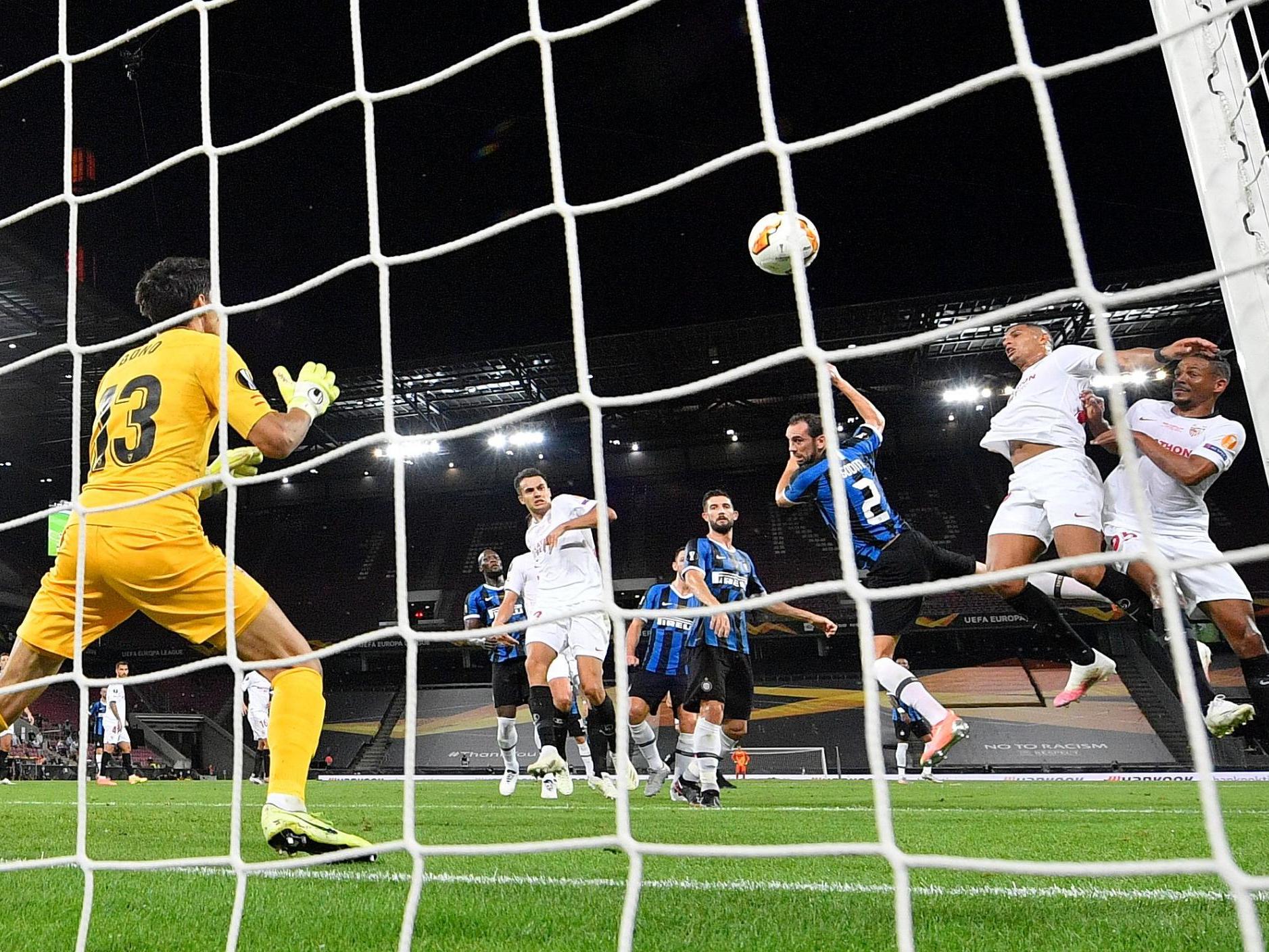 Alessandro Bastoni – 6: Wasn’t expected to affect the result, but still will have felt a bit of a passenger at times.

Danilo D’Ambrosio – 6: Could have done better as he tried to get on the end of a whipped cross in the first half, mistiming his attempted half-volley. Was adequate elsewhere.

Ashley Young – 7: Competent and industrious on the left for Inter.

Marcelo Brozovic – 8: Looked motivated and got on the ball as often as he could, and an inviting free-kick from the midfielder resulted in Godin’s equaliser for 2-2.

Nicolo Barella – 8: Twenty-three-year-old was lively from the opening whistle and kept the Sevilla defence on their toes throughout. Set up Lukaku before the striker was brought down for the penalty. 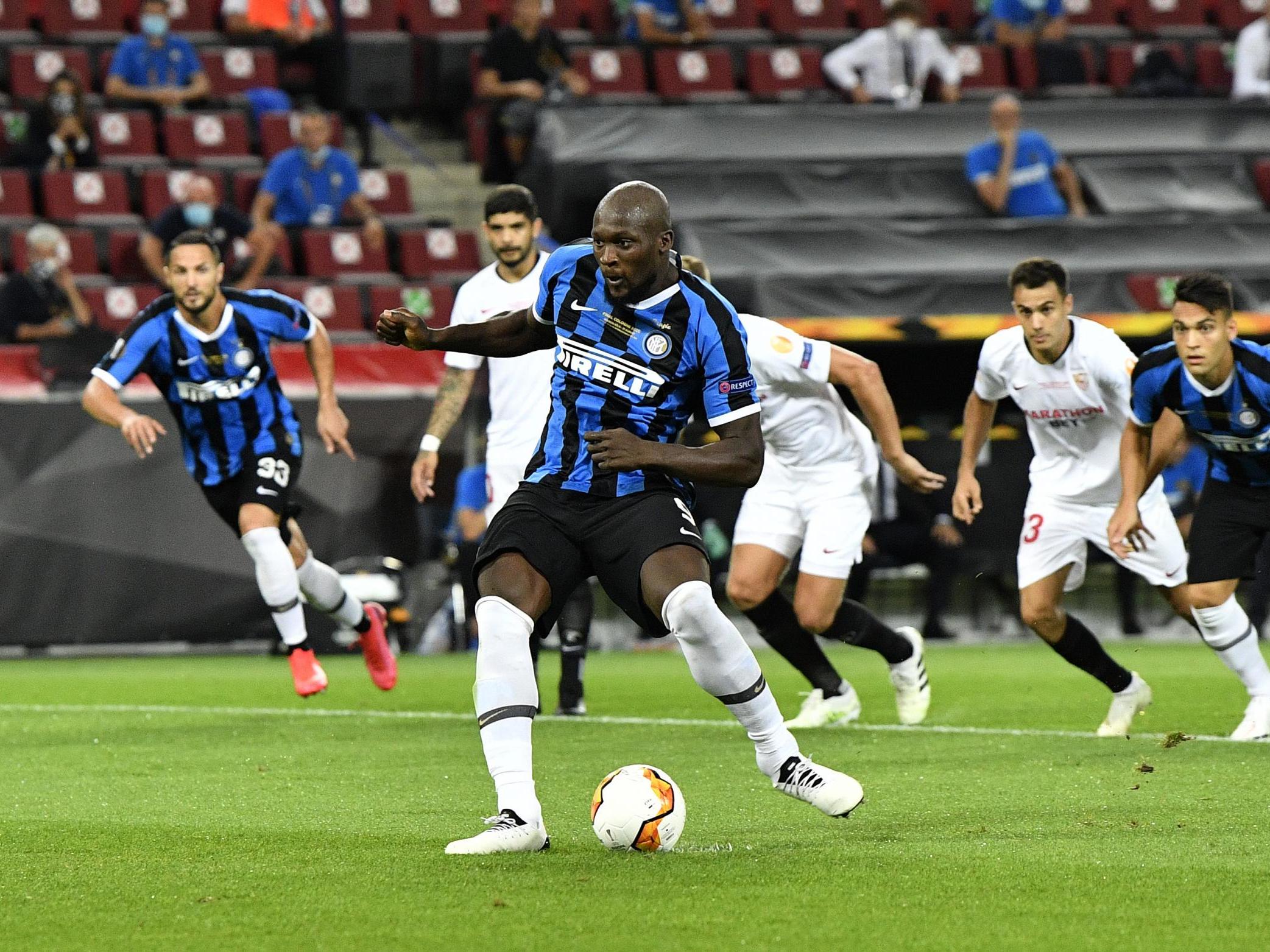 Roberto Gagliardini – 6: Worked hard and broke up play at points. Was outjumped by De Jong for Sevilla’s second goal, though.

Romelu Lukaku – 7: Exhibited his pace before outmuscling Diego Carlos to win an early penalty and subsequently scored from the spot. Painfully, however, he directed Diego Carlos’ overhead kick – which was going wide – past Handanovic for an own goal in the second half’s decisive moment… That dented his rating.

Lautaro Martinez – 6: Showed his obvious talents with one mazy run from his own half into the Sevilla box, but went down too easily at the end of the move. Elsewhere he surprisingly struggled to make a mark on the match.