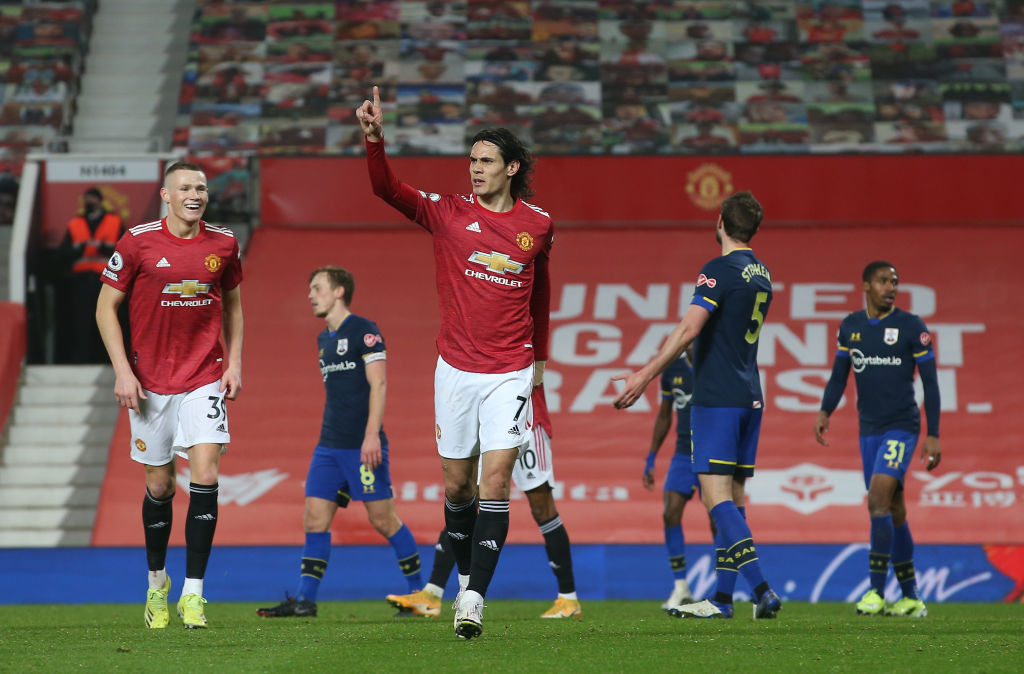 Ole Gunnar Solskjaer has revealed he took Edinson Cavani off at half-time of Manchester United’s 9-0 demolition of Southampton as a precaution after the striker suffered a knock to his ankle.

Cavani got on the scoresheet with an expert header as the Red Devils strolled to a Premier League record-equalling victory at Old Trafford against nine-man Saints.

Alexandre Jankewitz was sent off for a horror challenge on Scott McTominay after just 79 seconds and Jan Bednarek was also given his marching orders late on as a rampant United made their opponents suffer.

Goals from Aaron Wan-Bissaka, Marcus Rashford, Cavani as well as an own goal from Bednarek gave United a 4-0 lead going into half-time.

Further strikes from McTominay, Bruno Fernandes, Dan James and a brace from Anthony Martial in the second half saw United register their biggest win in the Premier League since beating Ipswich by the same scoreline 26 years ago.

After the game, Solskjaer admitted a strong tackle on Cavani’s ankle was the reason he was substituted at half-time for Martial.

‘He was good but he got a bad tackle on his ankle so there was no point taking any risks,’ Solskjaer told BT Sport.

‘So hopefully it won’t swell up too much.’

The Red Devils moved level on points with league leaders Manchester City, and Solskjaer was excited over the ‘magic’ on display from his side.

‘We shared the goals between the players,’ the Norwegian boss added. ‘When the game starts like it does it’s always if you can get the first goal as we have seen so many examples of 10 men closing up shop and getting a draw.

‘We’ve been waiting for them to show the magic and it was a night for them to go and enjoy it. We’ve not had many times where we could just enjoy the second half.

‘You get lots of confidence from a performance like this, scoring goals is always good for a team.’