London: James Ward-Prowse scored one and created another as Southampton dug deep to earn a much-needed 3-2 win over West Ham United in a pulsating Premier League game at the London Stadium on Sunday.

A lethargic opening from the home side allowed Southampton to take the lead after eight minutes when Mohamed Elyounoussi lashed home with his left foot from the edge of the box following a driving run from Kyle Walker-Peters. 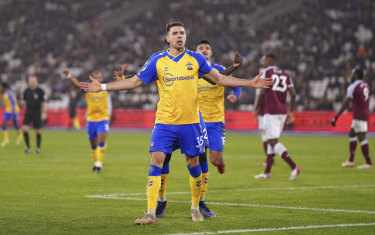 West Ham manager David Moyes turned to his bench after the break and substitute Michail Antonio made an instant impact when he headed home from close range in the 49th minute before Ward-Prowse restored the away side’s advantage from the spot just after the hour-mark.

A revitalised West Ham hit back three minutes later through Said Benrahma after being played in by Jarrod Bowen, but Jan Bednarek grabbed the winner in the 70th minute after deftly turning in a curling free kick from Ward-Prowse.

Southampton’s first league win since November 5 moved them up to 14th in the table with 20 points from 18 games, eight points behind sixth-placed West Ham.