Swansea maintained their fine start to the Sky Bet Championship season with a 2-1 victory over Millwall at the Liberty Stadium.

Defenders Jake Bidwell – with his first Swansea goal in 45 appearances – and Ben Cabango were on target in an eventful second half, with the Lions’ Wales striker Tom Bradshaw levelling in between.

Swansea will spend the international break in fourth position after taking 10 points from 12 as the Lions lick their wounds over a first league defeat.

Steve Cooper’s side were handed a blow before kick-off as goalkeeper Freddie Woodman missed out with a stomach bug, handing Steven Benda his debut following a successful loan spell at Swindon last season.

Sweden striker Viktor Gyokeres, signed on loan from Brighton on Friday, made the bench as the Lions named an unchanged side.

Both teams had started the campaign unbeaten and in sound defensive fashion, Brentford’s penalty in a 1-1 draw at Millwall being the only one conceded by the sides in their opening three games.

Swansea had an early penalty shout with Cabango claiming he was pushed by Lions skipper Alex Pearce but referee Stephen Martin was not interested.

Jed Wallace saw his shot at the other end diverted wide by Joe Rodon but the game quickly settled into a midfield battle with space for forwards at a premium. 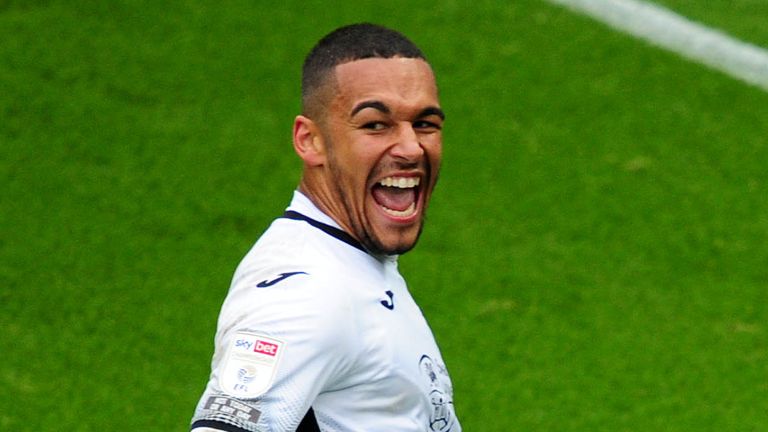 Marc Guehi, called up for England U21 duty this week, was booked for a sliding challenge on Wallace but it was Swansea who were asking most of the questions.

Guehi reacted smartly to block Mason Bennett’s header after good work by Scott Malone, and Benda was brought into serious action for the first time to hold Jake Cooper’s attempt.

Swansea were ahead within 60 seconds of the restart as Gibbs-White crossed from the right and Bidwell wrapped his foot around Marlon Romeo to poke the ball home.

But Millwall were level within minutes five minutes as Bradshaw worked the ball onto his right foot and beat Benda at his near post.

The game was held up as Andre Ayew received treatment following an off-the-ball incident with Lions defender Cooper, but the game continued without sanction.

Swansea regained the lead after 68 minutes when Grimes’ free-kick caused confusion in the visitors’ penalty area.

Bidwell’s backheel was pushed out by Bialkowski, but Cabango was in the right place to stab home his second Swansea goal and Benda protected their advantage with a flying save from substitute Jon Dadi Bodvarsson in stoppage time.

Swansea’s Steve Cooper: “We are a young side but I thought we came of age. You have to stand up to be counted when you play Millwall and I thought we did that.

“I told the players before the game that these are the kind of matches that we have to win if we are serious about what we are doing this season. Now we just need to keep going.”

Millwall’s Gary Rowett: “I think we did enough to get a point and we should have had a penalty in the 90th minute. It’s a bit of a cop-out from the referee because it was the most blatant penalty you’ll see.

“There’s a lot of pulling going on and their player grabs Shaun Hutchinson and wrestles him to the floor. But the referee said the ball had not come in play.”