A mysterious Sydney-based start-up that streams Indian baseball, Nicaraguan football and bare-knuckle boxing has beaten some of sports broadcasting’s biggest players to secure the exclusive rights to the UEFA Champions League in Australia.

Sports Flick – a streaming service that launched late last year and broadcasts predominantly fringe sports and football leagues with extremely niche local followings – has emerged as the shock winners of a blind auction-style tender process for the rights to the world’s most-watched club tournament, according to sources with knowledge of the deal. 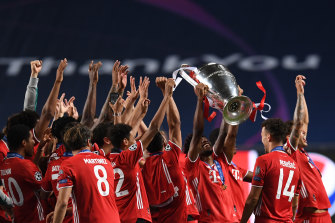 The UEFA Champions League had been a cornerstone of Optus Sport’s football offering but the telco, along with other competitors, was left stunned by Sports Flick’s bid, which sources suggest was about $20 million for a three-year period, starting in the 2021-22 season.

It is Sports Flick’s second significant football rights coup this year, having also snatched the K-League from Optus, who secured the South Korean top division last year when it was one of the first competitions in the world to emerge from COVID-enforced shutdown.

For several weeks, the industry has been abuzz with rumours that Optus had lost the UEFA Champions League rights, but multiple sources – including high-ranking football executives – have been unable to ascertain who had actually won them.

Precious little is known about Sports Flick, who its backers are, if any, or whether they could be in the market for any domestic rights.

According to their website, they charge $14.99 a month or $99.99 for a year’s subscription, but also offer pay-per-view videos of Serbian rugby league, last month’s cricket Test matches between Bangladesh and the West Indies and even competitive bodybuilding.

Sports Flick’s founder and chief executive officer Dylan Azzopardi says on his LinkedIn page that he started the company at age 25. He also describes himself as an “entrepreneur with a demonstrated history of working in the media production industry.”

Azzopardi teased on Twitter that Sports Flick was set to become “a home for football” and that four more football leagues would follow their K-League coup. The UEFA Champions League presumably leaves three more rights announcements to come.

The surprise development shows how sports broadcasting is becoming increasingly splintered, as overseas companies such as Amazon Prime and other emerging start-ups such as Sports Flick enter a market that was previously dominated by Foxtel and the three major free-to-air television stations.

For example, six years ago, a football fan in Australia had to pay only for a monthly subscription to Foxtel to access the best of domestic and overseas football. Now, the English Premier League is on Optus, the UEFA Champions League will be on Sports Flick and the A-League and many other European leagues are on Fox Sports or Kayo – for now, at least – stretching consumer budgets to their limits.

Research from Gemba late last year showed that 72 per cent of consumers had maxed out their spend on sport and entertainment platforms, and nearly one in five were looking to reduce their expenditure in the next three months.