The making of megastar Ronaldo ahead of Man United return

When Cristiano Ronaldo rocked up at Manchester United in a Lamborghini this week, it felt just like the good old days.

Of course, Ronaldo is a different man now at the age of 36 from the one who left United 12 years ago. A father of four, a five-time winner of the Ballon d’Or and an even bigger star after conquering Europe with Real Madrid and Portugal.

Still, it was almost possible to forget the passage of time when he returned to Carrington looking like a million dollars: tanned, immaculately manicured and capable of passing for someone considerably younger. 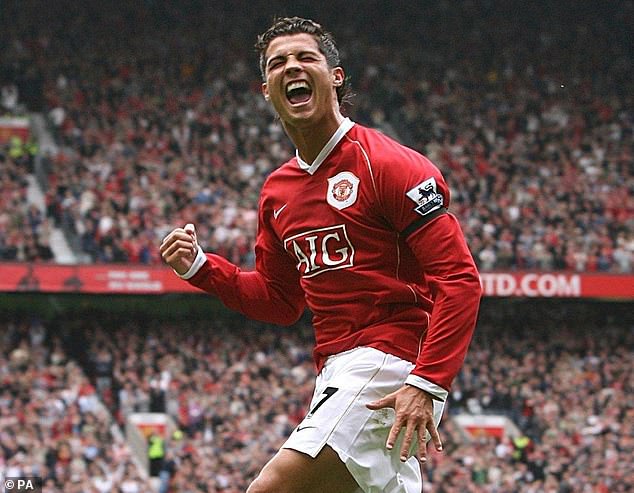 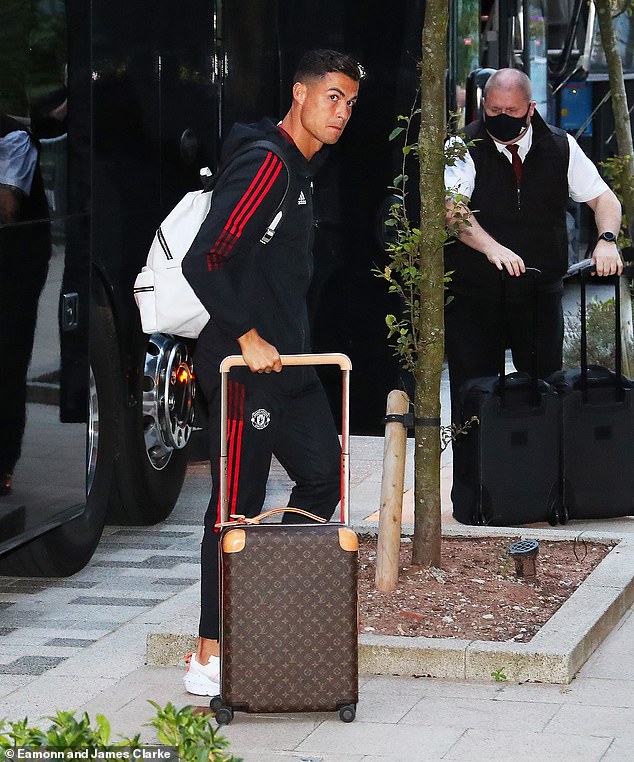 For Ronaldo, too, the surroundings will seem very familiar. He always made time to talk to the staff at United and was genuinely happy to see some old faces when he reported to the training ground on Tuesday.

The rented seven-bedroom property where he is staying with his partner Georgina Rodriguez and young family is only a short distance from his old house in Alderley Edge.

He moved there from nearby Woodford after the 2006 World Cup — amid the national uproar over his role in Wayne Rooney’s sending-off against Portugal — and only sold it in 2019, nearly a decade after moving to Spain.

The upmarket village hasn’t changed much either. It has always been a hotbed for Premier League footballers. The high street butcher used to put adverts for steak in his front window written in Spanish purely for the benefit of Ronaldo’s former United team-mate Carlos Tevez.

The Portuguese star’s five-bedroom, three-storey mansion briefly became home to Anderson and Nani when they joined the club in the summer of 2007 and was the setting, not two months later, for the lurid tale of a pool party with five call girls that found its way into the tabloids.

Then there was the time he crashed his £200,000 Ferrari in the Manchester Airport tunnel on his way to training shortly before leaving United in January 2009, having previously ploughed a Porsche Cayenne into someone’s front garden on the same stretch of road in Wilmslow.

Ronaldo was young and reckless back then, a typical footballer enjoying the trappings of fame.

He was, however, unique in so many other ways. An obsessive hell-bent on success, one with a relentless desire to better himself and become the best.

Patrice Evra’s favourite story about Ronaldo followed an invitation for lunch at the house in Alderley Edge.

‘There was a bit of salad, plain white chicken, no juice, just water,’ recalls Evra. ‘After that he said, “Let’s go in the garden and play two-touch. After that let’s go for a swim. After that, sauna and Jacuzzi”. I said, “Cristiano, why didn’t we just stay at the training ground?”.’ 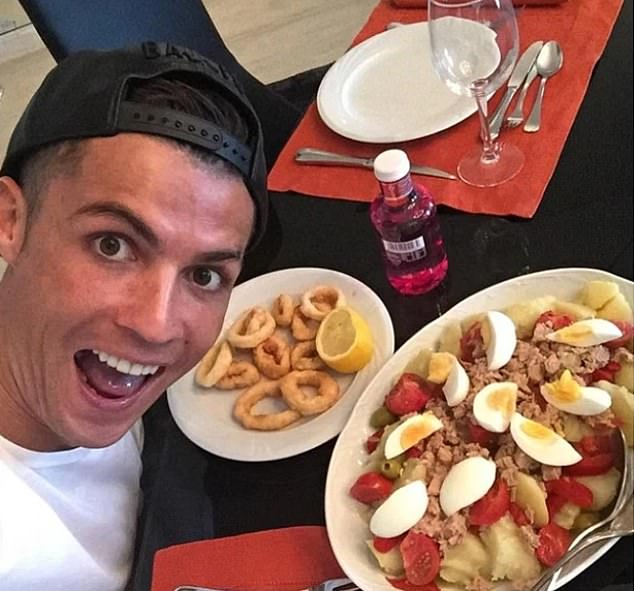 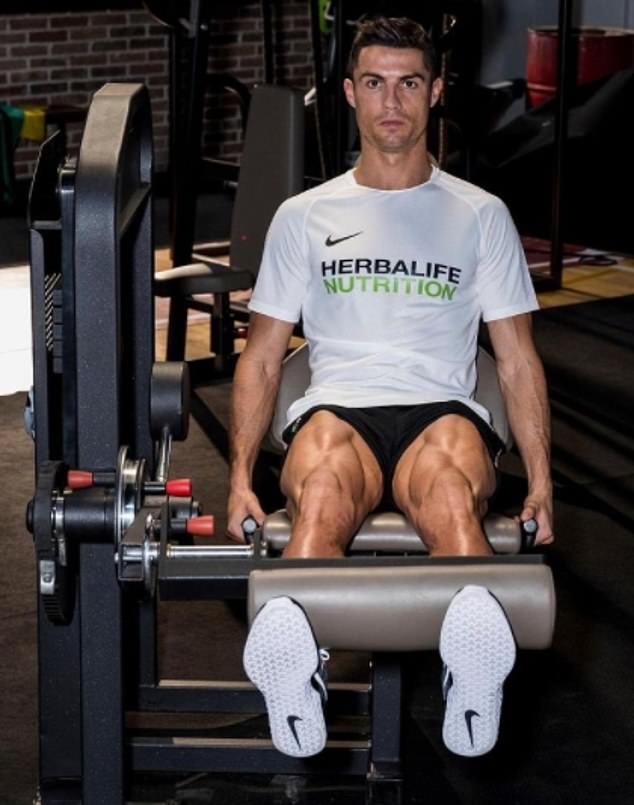 Ronaldo once nicknamed noodle, worked hard on and off the pitch to improve his physique

Other team-mates were already familiar with the youngster’s dedication to his craft. Ronaldo was the first player at the club to have a personal chef. Early on, a teenager so skinny that he was nicknamed Noodle in Portugal challenged United’s power and development coach Simon Clegg to help him become the supreme athlete we see today.

He would spend hours practising his tricks in private at Carrington where no one could witness any mistakes. The boy who used to wear weights around his ankles when running in the streets of Quinta do Falcao, the neighbourhood where he grew up on the island of Madeira, did the same in training at United.

‘Doing fast feet with ankle weights, he took training to another level,’ says Darren Fletcher. ‘The lads were laughing but he didn’t care. They saw it as a bit of banter but deep down they respected that work-rate and desire and the sheer determination to be the best player in the world.’

Ronaldo used resistance bands to strengthen his ankle ligaments knowing that a player with fancy feet and a penchant for stepovers in the early days was bound to be on the wrong end of brutal tackles — even from his team-mates.

‘He used to get snapped in training. People would kick the hell out of him,’ admits Rio Ferdinand. ‘We didn’t bully him. We all saw the huge potential he had. He came over and his first thought was to entertain but we wanted to win. We kicked it out of him, the entertainment factor, to get the goals and assists.’ 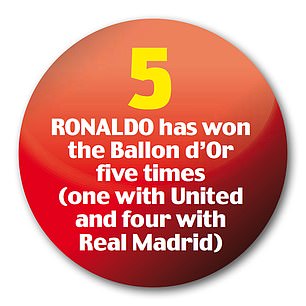 Ferdinand remembers Ruud van Nistelrooy, then the main man at United, flouncing off the training ground because he was infuriated by Ronaldo’s tricks. It was the start of an enmity that would see the Dutchman eventually leave amid accusations of favouritism, but also a lesson that the younger man took on board.

‘Ruud was making runs into the box and the ball wasn’t coming in because Cristiano was doing about 50 stepovers,’ says Ferdinand. ‘Ruud went crazy screaming, “He shouldn’t be on the pitch, he should be in the circus” and he walked in.

‘Cristiano got upset. “Why’s he talking to me that way?” But he realised that Ruud might actually be right. It wasn’t immediate, it was over time. All of a sudden it was about numbers, statistics, goals.

‘We used to take the mickey out of him. You’re not the real No 7 at this club, you’ve got George Best and David Beckham, people like that. He would argue back. There was a passion and a fire. You could see him thinking, “How am I going to get above these guys?”.

‘I don’t know a stronger, more determined, obsessed player that I’ve shared a dressing room with. I was very fortunate to sit there and see him go from a boy to a man. He came as a kid and left as the best player in the world.’

The story goes that Ferdinand beat Ronaldo at table tennis much to the delight of their teammates at Carrington. A furious Cristiano told his cousin Nuno Viveiros to buy a table tennis table and two weeks later avenged his defeat.

At Sporting Lisbon, Ronaldo was so determined to be stronger than his rivals in the academy that he would sneak out of the Centro de Estagio, home to the boys from out of town, in the middle of the night and get into the gym through a rooftop window.

The youngster had left his family for the Portuguese capital at the age of 12 after Sporting spotted him playing for Nacional.

When he trained at his old club in Madeira during the pandemic, his former youth coach Pedro Talhinhas saw a man still driven to be the best. 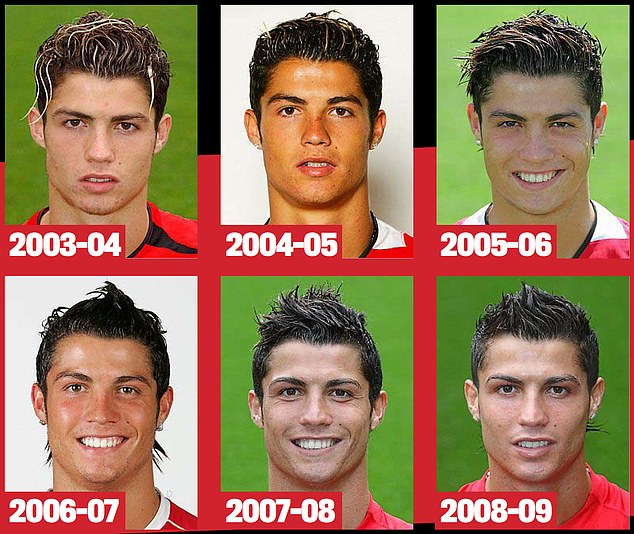 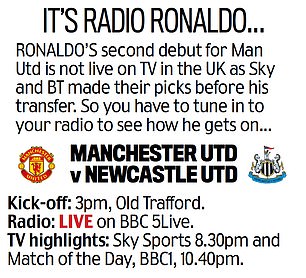 This week, Nike unveiled an all-weather football court in Quinta do Falcao dedicated to Ronaldo after he set a new international record of 111 goals in Portugal’s World Cup qualifier against Republic of Ireland.

A homesick Ronaldo cried every day after moving to Sporting where other boys mocked his thick Madeiran accent. By the time he faced United in a pre-season friendly in the summer of 2003, however, he was the club’s crown jewel. Sir Alex Ferguson describes that night as a revelation. ‘The biggest surge of excitement I experienced in football management.’

Ronaldo came along at the perfect time for a club who had just sold David Beckham and been snubbed by Ronaldinho.

The young man wasn’t afraid to accept Beckham’s No 7 shirt, just as it was inevitable that he would reclaim it from Edinson Cavani on his return. CR7 is just as marketable to United and the Premier League as it is to the man himself.

Ronaldo had more than enough talent to match Beckham and the looks as well. He got his teeth fixed at a Manchester clinic and grew out of the adolescent acne. Naturally, there was a sunbed at home to compensate for the Manchester weather. It was no coincidence that his place in the dressing room at Old Trafford was opposite a full-length mirror.

He and Nani would argue over who got off the team bus last and, in theory, got the biggest cheer from fans. There was only ever one winner, of course. Ronaldo used the extra time to check out his reflection in the window.

Staff and team-mates noticed a change in his body shape after Euro 2004 and even more so after the 2006 World Cup. 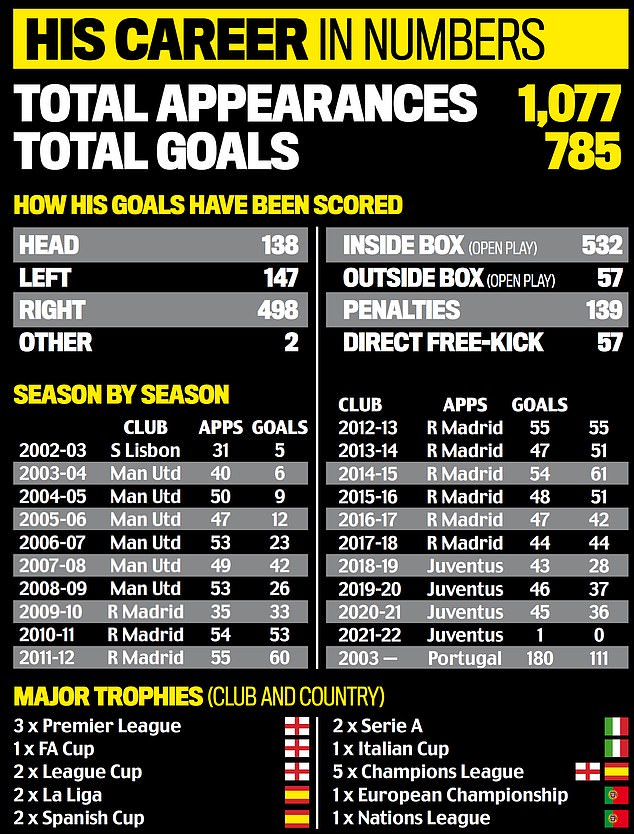 A physical transformation to go with the mental fortitude he needed to weather the Rooney ‘wink’ storm.

Ronaldo scored 42 goals in the 2007-08 season that ended with him winning his first Champions League and Ballon d’Or.

Viveiros recalls that the first thing his cousin did when he got back to Manchester following United’s win over Chelsea in Moscow was go to the gym.

Ronaldo had made no secret of his desire to join Real Madrid, though Ferguson managed to postpone a world record £80m transfer to keep the player for one more season and thwart Real president Ramon Calderon.

‘I’d rather shoot you than sell you to that guy now,’ said the United manager at a meeting in Portugal in the summer of 2008.

Ronaldo’s last game was the Champions League final the following season: the end of his Old Trafford career but the start of a rivalry with Lionel Messi and Barcelona, who beat United in Rome that night and again at Wembley two years later.

Ronaldo took his game to another level in Spain, driven by an obsession to usurp Messi as the best footballer on the planet.

He consulted a sleep guru who told him to take five 90-minute naps a day on fresh sheets. He had a cryotherapy chamber in his house for recovery sessions, a bike in his pool for resistance training and a gym where he would work out for up to four hours a day. 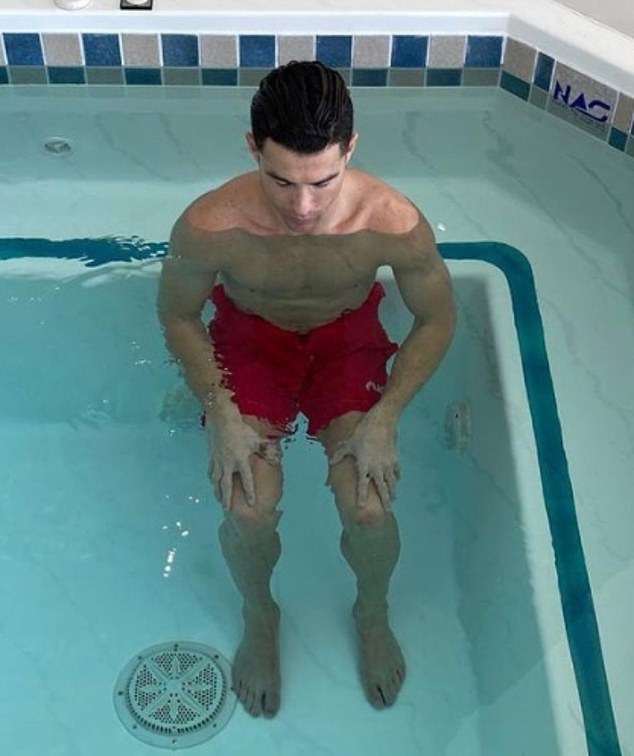 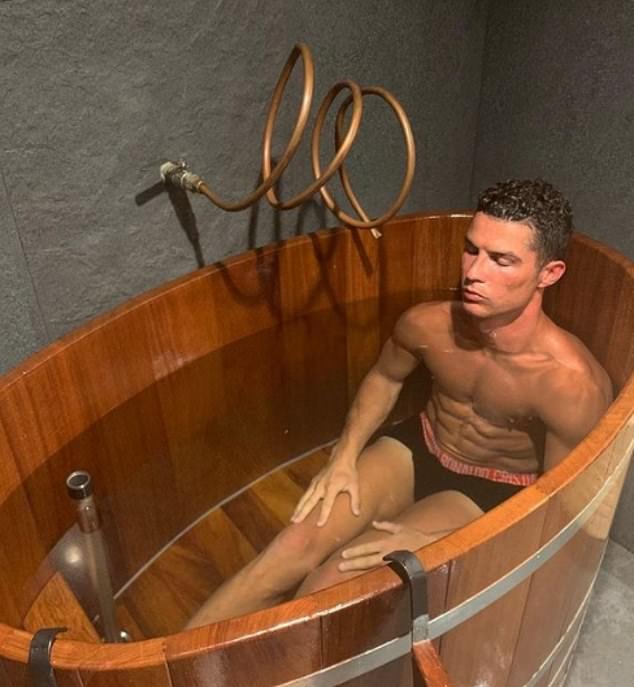 All fuelled by a high-protein diet of six daily meals and a preference for still mineral water over sugary drinks — as anyone who witnessed him disdainfully removing two bottles of Coke from the podium before a Portugal press conference this summer will know.

He rarely touches alcohol. His father, Dinis, died from the effects of alcoholism in 2005 and his mother, Dolores, has been the driving force behind a career that has so far brought 20 major trophies for club and country.

He returns to United as a global icon. He has a hotel chain, a statue at the airport in Madeira that is named after him, his own museum in Funchal and 340million followers on Instagram.

So much has changed in 12 years yet much remains the same, as he has discovered over the last week.

United must hope his insatiable hunger for success has not changed either.

There is nothing in the life of Cristiano Ronaldo dos Santos Aveiro to suggest it has. 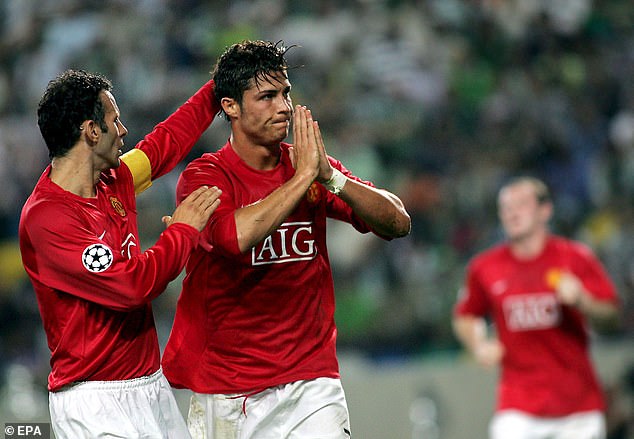