Gary Neville said it felt like there was a cloud hanging over Tottenham in pre-season and it was easy to understand why. Here it was, the big kick-off, the return of supporters to the Tottenham Hotspur Stadium, and Harry Kane was nowhere to be seen.

It is a situation that many have attempted to rationalise but few can really justify. Kane is a Tottenham player but wants to be a Manchester City player. Despite not yet receiving a penny for him, that meant Spurs had to start their campaign without him.

Ostensibly, it made City the worst of all visitors, an unsettling reminder of Spurs’ apparent inadequacy. Graeme Souness set the game up by describing Pep Guardiola’s squad as the best that he has seen in his 50 years in English football. Without Kane. 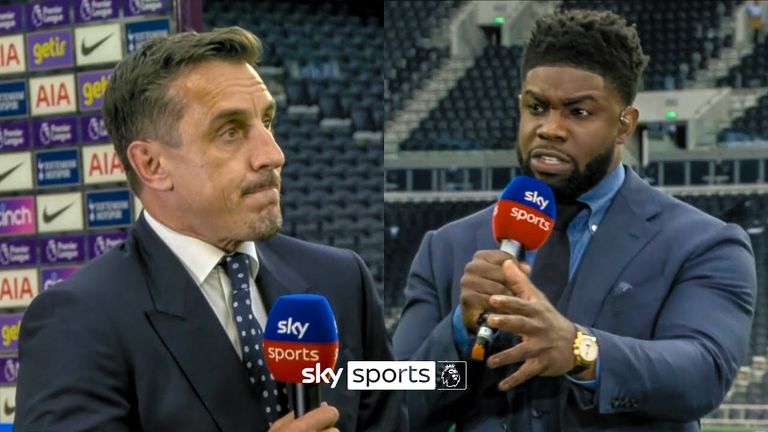 Even Tottenham’s social media accounts appeared to strike a defeatist tone before kick-off, sharing the message that ‘whatever happens, we’ll give it absolutely everything.’ The stands were full of hope, but deep down everyone seemed to be fearing the worst.

Little they saw in the opening quarter of an hour gave reason to change that view as City began with purpose. The £100m man Jack Grealish was busy creating an overload on the left as he and Raheem Sterling appeared to scent blood in targeting Japhet Tanganga.

Grealish drew one foul and then another, Sterling too. Oliver Skipp looked hurried in possession. A glance at the clock revealed there was an hour and a quarter still remaining and it was difficult to imagine that Spurs would hold out until half-time let alone full.

But then a funny thing happened. Spurs stuck together and they stuck at it. Roared on by 60,000 supporters, they did not shy from the challenge. Tanganga refused to be overawed by the opposition or becalmed by the referee. Skipp began to make his presence felt.

Spurs kept running, contesting the ball, coming up with the interceptions, and the counter-attacking opportunities began to arrive as City’s pace dropped. Lucas Moura, terrific all afternoon, led the charge. Steven Bergwijn and Heung-Min Son matched his energy.

Even without Kane, that Spurs counter-attack appears potent. It is a style that suits their new manager, one who had already done the double over City during his time with Wolves.

There have been questions over whether Nuno Espirito Santo can deliver the free-flowing game that Daniel Levy identified as crucial to the club’s DNA but those demands were for another day. Nobody expected Spurs to dominate the champions in possession.

The fans will settle for this kind of dominance instead because having made it difficult for City, they wilted. Happy at half-time, Nuno would have been further encouraged soon after as City reverted to walking football, out of ideas against an organised defence.

One passage of play early in the second half seemed to defined the game. Fernandinho uncharacteristically opted to shoot from 30 yards out on the angle, dragging the attempt well wide for a goal-kick. It was an act of frustration with City bereft.

The next minute, Spurs’ front three went narrow with the ball at the feet of Ruben Dias, encouraging the pass out to Benjamin Mendy, who promptly gave it away. “A lot of the attacks are coming down the City left,” said Neville on co-commentary. 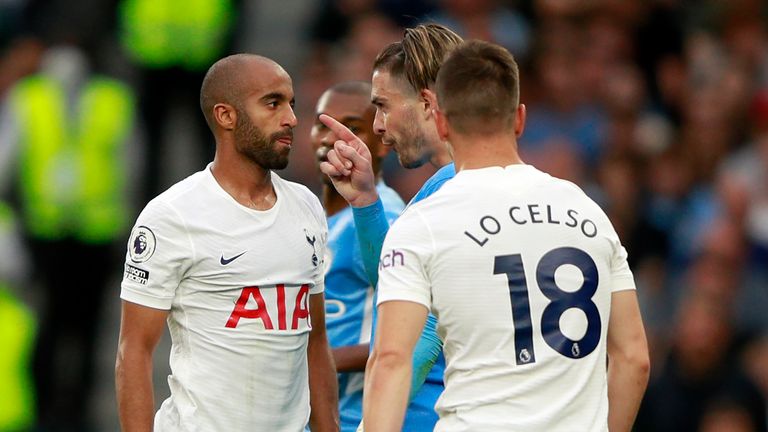 The weakness was identified and it was swiftly exploited as Son, emboldened after presumably regretting passing up the chance to run at Nathan Ake in the first half, cut inside and fired off a shot that soared past Ederson into the far corner of the net.

Spurs must have been braced for City to throw everything at them and Kevin De Bruyne duly emerged, but this was a strange sort of display. Joao Cancelo attempting headers from outside the box. Oleksandr Zinchenko whipping in crosses from the halfway line. 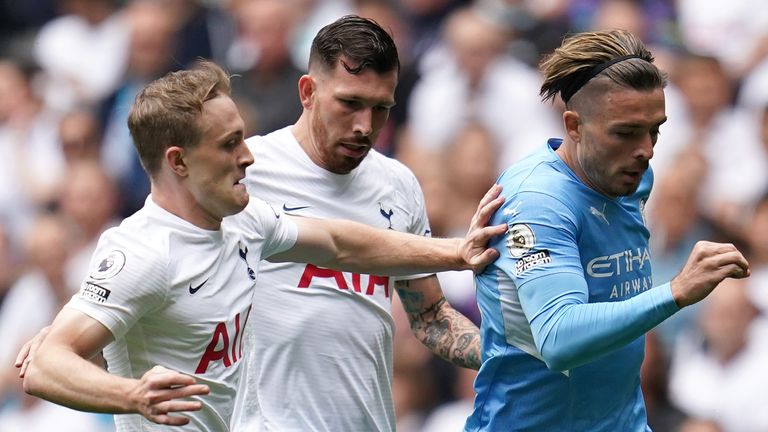 The fear was that Grealish’s habit of taking his time on the ball might slow City’s play. In truth, he was one of the few trying to inject any urgency into their game as they continued where they had left off at Wembley.

The contrast with the home team was pronounced. “Tottenham were gritty,” Souness told Sky Sports. “They dug in, they challenged for every single ball, they were physical. They were up for the cup today and I do not think you can City were unlucky.”

Lifted by the crowd, Skipp put in one huge tackle in stoppage time that drew loud roars of approval from a vociferous crowd. Davinson Sanchez soon followed that up with an even better one in the final moments. For these supporters, football was truly back.

Do they have their team back, even minus one of their own?

Perhaps it is a little too soon to say. Jose Mourinho won this fixture last season and the season before. Spurs even topped the table as recently as December back when there was a theory that his counter-attacking template might carry this team a long way.

But this still felt different.

There was no Mourinho. A reminder that Spurs supporters need not be persuaded that only he and his machinations are capable of producing these against-the-odds victories.

And there was no Kane, of course. A reminder that the spirit of this team will still be there even if their best player is not. “Are you watching, Harry Kane?” That was the cry from the crowd as the final minutes ticked by. It was defiant. Maybe the clouds are lifting.