Never one to be knowingly understated, as the full-time whistle blew Antonio Conte howled into the night sky, punched the air in furious satisfaction, and wrapped his staff in a bearhug. Out on the pitch, his players celebrated and then clutched at their knees, their smiles broken by sharp breaths of air. “I’m dead, but I’m so happy,” Sergio Reguilon said, shortly after his rebound sealed an unconvincing and yet symbolic comeback against Leeds.

It was the night Conte’s tenure truly began; an evolution set in motion over the course of 90 volatile minutes. In the first half, Spurs were so insipid one would struggle to identify anything resembling a personality at all. They passed sideways, pressed half-heartedly, and counter-attacked without purpose. And as they trickled into their fourth Premier League hour without a shot on target, the sense of anticipation that had stirred ahead of kick-off sagged into a chorus of groans with every failed attack. There had been precious few glimmers to separate their performance from the staleness under Nuno. Instead, it was as though all Spurs’ flaws had been spun through a kaleidoscope and put on full display. The boos that rang out at half-time, minutes after Dan James had deservedly broken the deadlock, told as much of the misery.

But the reaction it provoked from Conte and, in turn, his players, revealed far more about what Spurs can become. It has always been tempting to see Conte’s influence through the prism of personality. After all, he stalks the touchline with a ceaseless and unsparing passion: shouting and sighing, instructing and berating. His players feed off that intensity in a manner that’s almost addictive, and when Spurs emerged for the second half, it was fundamental to how they upped the tempo and were able to simply overwhelm Leeds. “I have a great passion and I want to transfer it in all the environment,” Conte said afterwards. “When it comes to passion, you either have it or you don’t.”

It almost goes without saying, though, that Conte’s true strengths run far deeper than fiery motivation. In fact, his blustery character can often serve to inhibit the more subtle tactical ingenuities. And while he invoked a certain wrath in his players after the break, with Spurs hitting the woodwork three times in six minutes before Pierre-Emile Hojbjerg and Reguilon completed the comeback, the tactical changes Conte made offer a hope and blueprint that promises to be far more enduring.

Kalvin Phillips had been exceptional in the first half, dropping into a back three, making crucial challenges and interceptions, before stepping back out and being Leeds’ focal point in possession. Conte knew he had to offset that rhythm to reverse the tide. Harry Kane and Lucas Moura dropped deeper into central positions and the midfield pressed up. All of a sudden, the space Phillips had commanded was being suffocated and Leeds’ vital artery was cut off. “Second half I totally changed the situation and the tactical aspect and also I said to them we had to go man to man and play with the same intensity,” Conte said. “I changed the plan tactically but then they played well, they played with personality.” 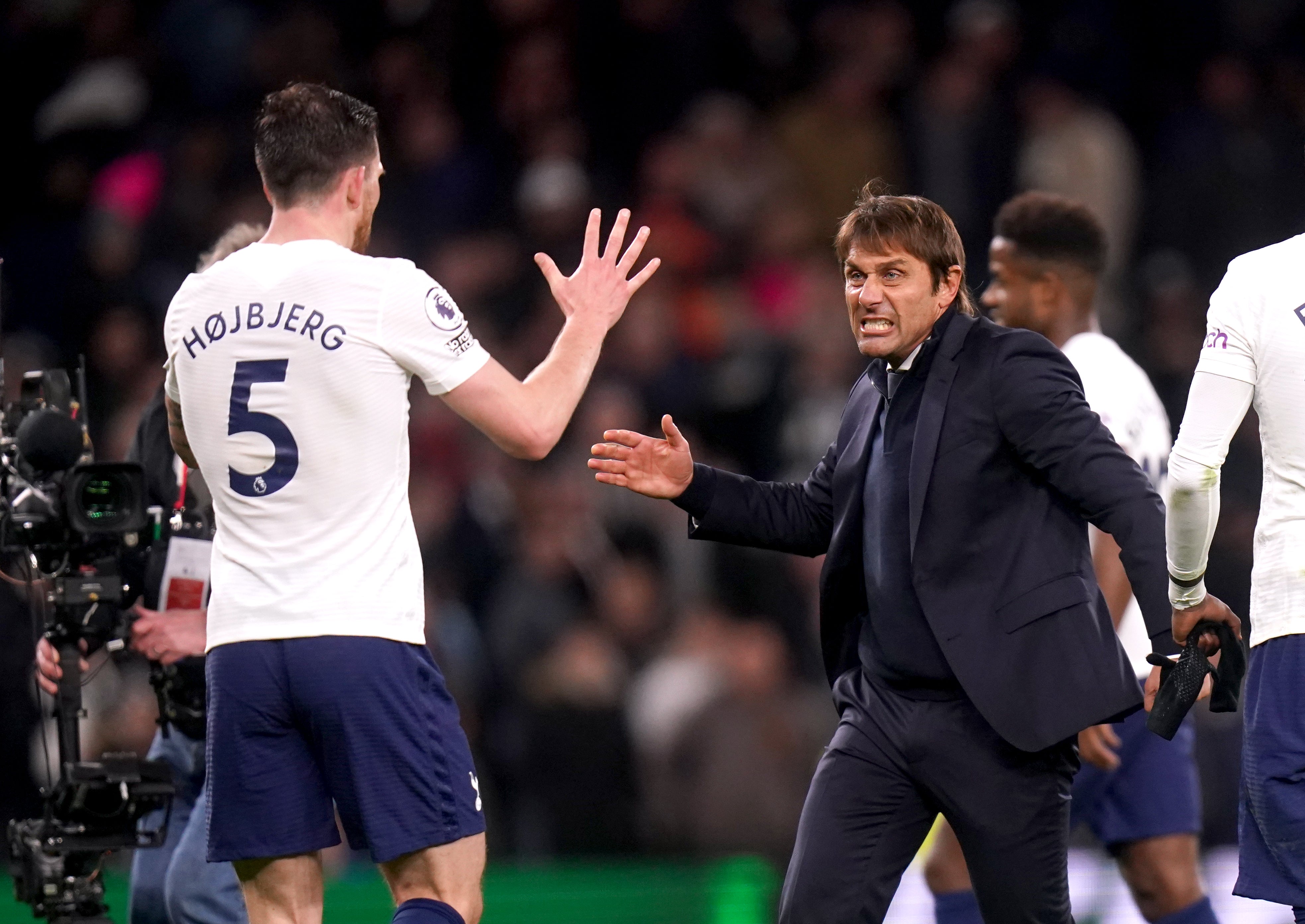 For both the coach and supporters, who Conte was wildly rallying to their feet in the final minutes, it is an extremely encouraging sign. He has had little time to work with the squad on the training ground and they are still adjusting to his autocratic fitness demands. Reguilon had described the past week’s training sessions as “the worst week of my life”. But Spurs showed promising glimpses that they can execute Conte’s collective vision, even if question marks remain over the quality of some individuals. It was an energy and pattern that felt far removed from the previous malaise under Nuno and Jose Mourinho. It might only have been 45 minutes, a sample so small it’s always vulnerable to false dawn, but it’s a basis to work off, a marker from which Conte has no intention of looking back. As he said afterwards, “this is a point to start for the rest of the season”.

And so while Conte’s untamed celebrations may be what lasts in the imagination, there’s no mistaking that Spurs now have a manager with a clear vision and plainer expectations. Problems and incoherencies remain, but be it through anger and inspiration or meticulous fine-tuning, Sunday’s second half felt like a small but significant step in moulding Spurs’ squad in his image. And that picture should only become more detailed with time.