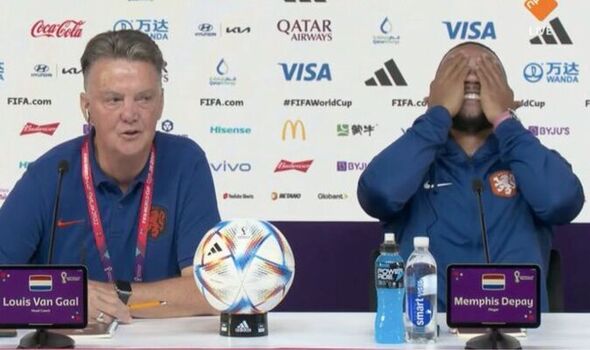 Holland boss Louis van Goal has responded to claims from Angel Di Maria that he is the worst coach of the Argentine’s illustrious career. The pair failed to strike up a bond during their one season together at Manchester United after the Red Devils sanctioned a big-money club-record transfer worth just under £60million for the Dutch boss upon arrival at Old Trafford in 2014.

Di Maria would only last a single season in the Premier League before moving to Paris Saint-Germain as United took a hit to get him off the books.

Now Di Maria will get the chance to haunt his old manager when Argentina meet his Holland side in the World Cup quarter-finals on Friday.

“My problem at Manchester was the coach,” Di Maria told TyC Sports in South America. “Van Gaal was the worst of my career. I would score, assist, and the next day he would show me my misplaced passes.

“He displaced me from one day to the other, he didn’t like players being more than him.”

Now Van Gaal has responded by claiming Memphis Depay did not initially like him either before bizarrely claiming they now “kiss each other on the mouth.”

“Di Maria is a great player. During his time at Manchester he had many private problems, his house was being robbed,” Van Gaal said during his press conference.

“Di Maria calling me the worst manager he has ever had? He’s one of the few players with this opinion.

“I’m really sorry about this and I find it sad that he said this. Memphis had to deal with it too at Manchester, and now we kiss each other on the mouth.

“That kiss on the mouth.. he [Memphis] doesn’t want it but this is fine.”

Depay could hardly contain his laughter as his head coach cracked the joke in front of the media.

Van Gaal also recently kissed his wing-back Denzel Dumfries on the cheek after he netted in Holland’s last 16 win over the USA.

The Orange are making steady progress in Qatar after finishing top of Group A – beating Senegal (2-0) and Qatar (2-0) in the process either side of a 1-1 draw with Ecuador.

Speaking to The Guardian in 2019, Van Gaal defended his usage of Di Maria when quizzed on whether the signing was his or the board’s.

Van Gaal said: “I was satisfied because he was a creative player but I had other players on the list. Di Maria had a problem with the English football culture and the climate. You cannot buy players and know, for sure, that they can deliver. You cannot know because football is a team sport.

“I always ask a player where he wants to play. For him it was wing, wide and mostly left. In the Argentina team he plays on the left. I started with him there. He was not performing that well, to a level you could expect from an £80million player.

“I believe, then, I have to see if another position is better for him. I have played him as a left winger, as the 10, second striker and on the right. Then the critics say he is having to play in too many positions.

“I gave him all the chances that there were to perform well.”