Victory crash to Reds and looked doomed to wooden spoon

An ashen-faced Grant Brebner had refused to throw his players under a bus a week earlier when they had been humiliated 6-0 by Melbourne City, declaring only that he would take responsibility for the “uanacceptable” abject performance.

He promised harsh words and brutally honest conversastions with all concerned in the week leading up to Saturday night’s clash with Adelaide United. 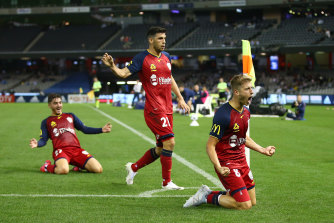 Brebner insisted that the team cared, that they were hurt, that players were not just going through the motions and were determined to give their fans a sense of hope.

For the first 45 minutes of this game Brebner’s prediction that, if nothing else, his team would show enthusiasm and fight looked correct.

It was an improvement and they even took the lead. But that was a false dawn.

Victory are simply not good enough, physical enough, sharp enough, quick enough, tactically adept or committed enough to trouble a team as good as the Reds for 90 minutes.

In the end Carl Veart’s Adelaide won 3-1, pushing themselves up to second place on the table and leaving Victory marooned at the bottom of the league.

Robbie Kruse is a useful barometer for Victory: when he is on, they look better . When he cannot get involved, they inevitably founder. 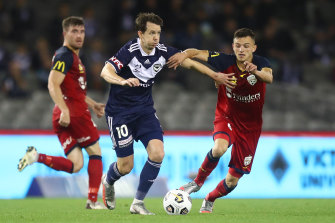 He is no longer as quick as he was when he first joined Victory more than a decade ago, but he retains a sharp football brain, good touch and enough smarts to still ensure that he can be a handful, especially when he is given the space to run at defenders and build up a head of steam.

While Victory rarely strung together any fluent passing moves, Kruse took it on himself to make something happen in that opening half, breaking through on several occasions as he looked to create opportunities for teammates or space for a shot himself.

Another experienced forward, Callum McManaman, showed an appetite for the contest, slipping past defenders, riding challenges and winning free kicks in dangerous areas.

And it was from such a foul that Victory took the lead in the 28th minute, Jake Brimmer producing a dipping drive from a long-range free kick which beat the Reds’ debutant goalkeeper Joe Gauci, crashed off the underside of the bar and over the line. 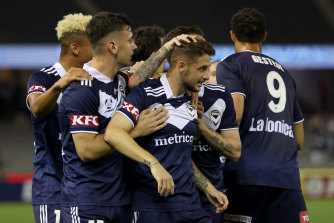 Jake Brimmer gave Victory the lead and something to smile about but it was not to be.Credit:Getty Images

It was exactly what the beleaguered team needed, but the lead only lasted seven minutes.

When you are down at the bottom of the league it always feels as though the fates are stacked against you.

Adelaide had created little in the way of clearcut chances, but when Javi Lopez’s cross was only partially cleared by Leigh Broxham it seemed inevitable it would fall to a Reds player – and so it was, with Stefan Mauk pouncing on a loose ball before Jacob Butterfield to drive past Victory keeper Matt Acton.

Adelaide began to exert themselves in the second half as a disjointed Victory struggled to put any cohesive moves together.

Once again there was a sense of inevitability when Adelaide winger Craig Goodwin broke into space and squared a pass across goal to substitute Kusini Yengi, who escaped his marker to slip the ball past Acton.

With a quarter of an hour to go Victory’s fate was sealed when Yengi showed far too much pace and strength for a number of opponents as he ran towards goal, setting Mauk up for a straightforward finish to make it 3-1.