There is never a dull moment in this car crash of a season for Melbourne Victory and the A-League strugglers found a new way to frighten their fans on Friday night, allowing Western Sydney to score three times in the last 14 minutes before clinging on for a rollercoaster 5-4 triumph at Marvel Stadium

Now under the interim control of Steve Kean until Tony Popovic takes charge next season, Victory was made to sweat in front of a spartan home crowd before securing the win that takes them off the bottom of the table.

Kean had warned this week that the bulk of his squad would be playing for their footballing future during his 10 games in charge. 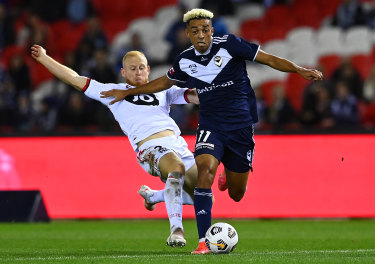 Gbenga Folami gets moving against the Warriors.Credit:Getty Images

Veteran forward Robbie Kruse certainly looked up for the challenge and rolled back the years in the 14th minute when he created the opening goal for young striker Ben Folami, his first in the A-League.

Kruse charged down the right, shrugged off a challenge and played a one-two with Callum McManaman before dinking a cross towards Folami, who volleyed home from inside the penalty area.

Wanderers pressed on and it seemed only a matter of time before they would equalise, but the next goal also went to Victory – the result of poor defending from a set piece when Storm Roux was allowed to run in and head home unchallenged from Jake Brimmer’s 28th-minute corner. 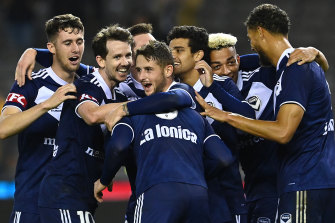 Victory celebrate one of their five goals.Credit:Getty Images

Three minutes later Wanderers did get back into the game courtesy of Victory old boy James Troisi, who lashed home a fierce drive off the underside of the crossbar after Victory had failed to deal properly with a Bruce Kamau cross.

But once again Victory was able to take advantage of slipshod defending from a set piece. Folami was the man on the spot, firing home from another Brimmer corner after his marker, Ziggy Gordon, had slipped over at the worst possible moment, giving the hosts a 3-1 interval lead.

Gordon almost made amends soon after the restart with a header through a crowded penalty area which Matt Acton did well to palm away to safety. Brandon Lauton then cleared off the line before Acton dived to paw a Bernie Ibini header to safety.

Victory had a perfect opportunity to stretch the lead still further when Folami’s marauding run was brought to an end when he was tripped up by Gordon in the penalty area, referee Alireza Faghani pointing to the spot. 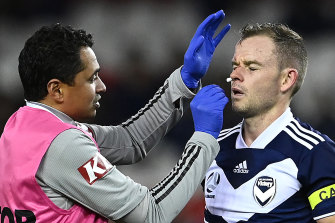 Brimmer strode forward, but Daniel Margush guessed correctly and turned the drive over the bar for a corner. Brimmer took the set piece – and his blushes were spared when Dylan Ryan popped up on the far post to drive home McManaman’s flick on.

Jacob Butterfield made it 5-1 when he was allowed to turn unchallenged and lash home a drive from the edge of the penalty area before a Graham Dorrans penalty with 14 minutes remaining and late goals to Mitch Duke Nicolai Muller almost saw Wanderers grab an unlikely point.