Aston Villa ‘ask the Premier League to postpone ANOTHER game’ with their clash against Everton on Sunday now under threat… and Dean Smith’s team are STILL unable to train, which they say would make playing unsafe

Aston Villa have reportedly asked the Premier League to postpone their second league match in a row and reschedule Sunday’s fixture against Everton.

Dean Smith’s side are continuing to battle against a Covid-19 outbreak within the squad, and successfully requested for their Wednesday night fixture against Tottenham to be put back as a result.

Now the Midlands club have asked to avoid another match-day in order to facilitate the full recovery of the squad and get players back, as report the Times. 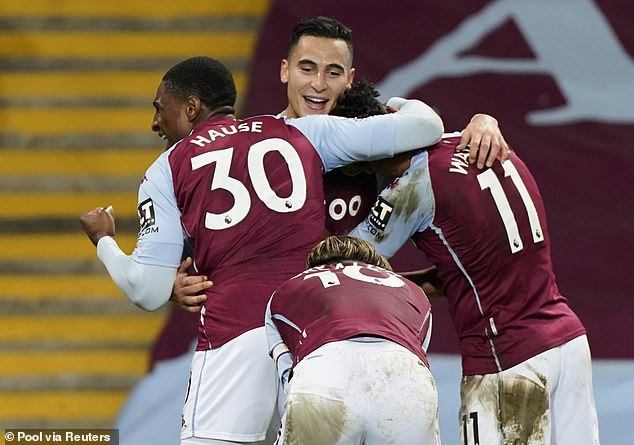 Villa’s clash with Spurs was axed after nine players and five members of staff tested positive last week, with the club also forced to field academy players in an FA Cup clash with Liverpool, which they lost 4-1.

In making their case to the Premier League, Villa have reported told the football body that they remain locked out of their training ground and may not return there before the weekend, which they believe makes it impossible for them to prepare properly and safely for the match on Sunday.

The game against Carlo Ancelotti’s side is set to kick-off at 12pm midday, though an update from the Premier League regarding the situation is expected imminently.

Villa’s next scheduled match after Sunday is away to Manchester City next Wednesday.

On Tuesday Premier League chief executive Richard Masters sent a letter to all 20 clubs in the top flight outlining that two new protocols would be introduced to try to ensure as much clarity as possible over how the league reaches decisions on if and how Covid-affected clubs are entitled to be granted match postponements.

The protocols will be met in the form of the information clubs must provide to justify a full match postponement, and also the specific response clubs should make to Covid outbreaks accordingly.