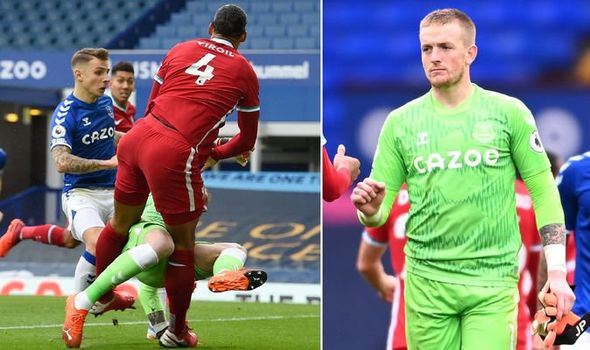 Everton goalkeeper Jordan Pickford could face a retrospective ban for his shocking tackle that has left Liverpool defender Virgil van Dijk staring at a sustained spell on the sidelines. Pickford’s scissor challenge on the Dutchman left him unable to play on and there is speculation Van Dijk has ruptured his anterior cruciate ligament.

Liverpool are worried that the Netherlands captain will be out for a lengthy period amid suggestions he will be absent for the rest of the season.

Pickford was not carded despite the Video Assistant Referee David Coote reportedly looking at the incident.

A penalty could not be given because Van Dijk was ruled offside but the VAR would have been able to recommend a red card for Pickford’s lunge.

But the Toffees shot-stopper escaped on-field punishment and played out the remainder of the match as Everton and Liverpool drew 2-2 at Goodison Park. 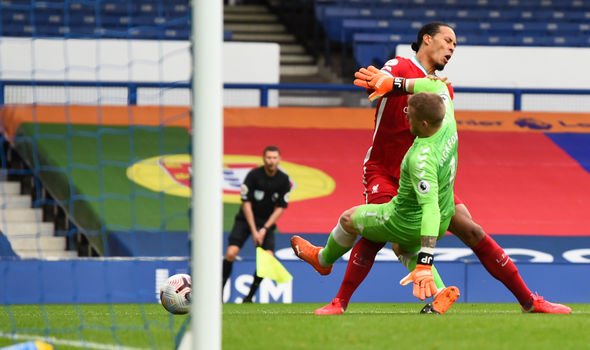 Liverpool captain Jordan Henderson revealed post-match that Pickford had asked him to apologise on his behalf to Van Dijk.

But Pickford could be punished by the Football Association, according to the Daily Mirror, dependent on refere Michael Oliver’s report of the match.

The FA have the power to take retrospective action on incidents missing by the official on the pitch.

The Mirror say Oliver did not have a clear view of the challenge and if that is corroborated in the ref’s report, Pickford could face a ban for serious foul play.

If Oliver and Coote admit they missed the incident then the FA could take action.

Liverpool have complained to the Premier League and asked for the game’s two controversial VAR decisions to be reviewed.

In addition to Pickford remaining on the pitch, the Reds are not satisfied with the decison-making that ruled out a winning goal in stoppage time.

Sadio Mane was adjuged to have strayed ever so slightly offside before Jordan Henderson fired beyond Pickford from close range and the goal was disallowed.

Former referee Peter Walton, speaking on BT Sport’s coverage of the derby, meanwhile felt that the Everton keeper was lucky not to be dismissed.

Walton said: “It’s two stages really. First of all, they look at the offside.

“When we saw the offside pictures it looks as if [Van Dijk] was offside to begin with.

“However, when we freeze the frames we’ll see Van Dijk is just being played offside as he goes through there. It’s being drawn from the new interpretation of the armpit.

“The foul from Pickford is still relevant because even though the whistle may have gone, the game stopped, players are still accountable for their actions and the VAR will have looked at that to see if there was a point of serious foul play happening.

“Personally, I think it was ‘serious foul play’ and I think Pickford was a lucky player not to have been sent off for that particular challenge.” 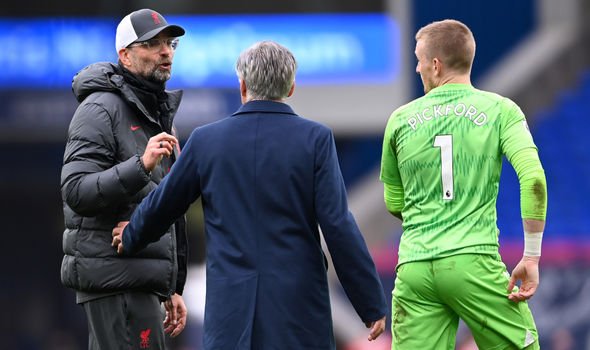 While Liverpool boss Jurgen Klopp declared: “For me it was a clear penalty, what I saw.

“And then obviously we saw that the flag went up, so offside, I still thought it was worth to have a look on the foul but that didn’t happen. We have no power there. We’re just here, you discuss it with me, we have to ask other people about that, not me.

“It was a… what can I say? Find the word… I don’t want to say Jordan Pickford wanted to do it but it is of course not a challenge how a goalie can do it in the box because there is another player.