Three months after he walked out on the Newcastle Jets, Carl Robinson walked back into to McDonald Jones Stadium as public enemy No.1. He left with his first win and the last laugh.

In an open, entertaining and sometimes spiteful affair on Friday night, the Western Sydney Wanderers prevailed 2-1 to give Robinson his first three points as coach – and a compelling riposte to the hate he's copped from the Hunter since abandoning the Jets on the eve of the new A-League season. 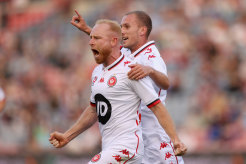 Ziggy Gordon (left) celebrates his goal for the Wanderers on Friday night.Credit:Getty

An early header from Ziggy Gordon and a second-half sizzler from Olyroos hopeful Tate Russell did the business for the Wanderers, laying another important brick in Robinson's rebuild on the run.

The Jets came out intent on proving to Robinson – and Bernie Ibini, who came off the bench in the 68th to predictable jeers from the Newcastle faithful – that they both made the wrong call by moving to Western Sydney.

Despite falling to a clear and deserved defeat, there were sparks of life, particularly across an impressive first half and late in the second, that could suggest this season might not be as barren for the Jets as many have predicted.

Valentino Yuel and Ramy Najjarine were creative and electric down the flanks, but caretaker coach Craig Deans will be rueing the lack of finishing on the end of their crosses, and hoping that the club's new owners – a group of rival A-League investors, including Wanderers chairman Paul Lederer – can provide funds to bolster his squad with some much-needed quality.

Yuel ran the Wanderers ragged in the opening exchanges only for his marker, Gordon, to leave him in the dust as he broke clear and nodded home a corner kick to give the visitors the lead in the seventh minute.

Just before the hour mark, Russell doubled their advantage with a first-time piledriver that exploded past Jack Duncan.

In between, an incredible long-distance strike from Nicolai Muller was chalked off after the VAR spotted Simon Cox straying marginally offside during the build-up play, while Thomas Aquilina – handed his maiden A-League start by Robinson – somehow missed an unmissable tap-in from point-blank range.

Newcastle captain Nigel Boogaard's 73rd-minute header off a swerving Najjarine free kick gave the Jets hope of a late comeback but despite a gallant late rally, their fans would have little more to shout for.

They did, however, enjoy Ibini's failure to convert a one-on-one chance, which elicited a round of sarcastic cheers, and the COVID-capped, mask-clad crowd continued to hound the Wanderers forward every time he neared the ball.

The Jets certainly had their chances, but Western Sydney continually repelled them. They finished the first half with more shots on goal (11 to 7) but could not convert any of them, despite the toil and trouble caused by Yuel and Najjarine.

Their best chance came just after the half-hour mark through Yuel, whose shot looked destined to sneak into the bottom-left corner until a one-handed Daniel Margush stop denied him.