There’s two things Socceroos defender Rhyan Grant gets asked about more than anything else: his mullet and his future.

At least one of those topics can be put to bed for good, thankfully, now that the Sydney FC stalwart has shaved off his illustrious locks for a worthy cause – the Leukaemia Foundation, for which he has raised more than $20,000. 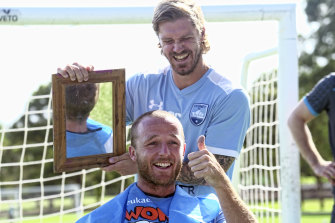 The mullet that has graced – or disgraced – Rhyan Grant’s head for the last three years is finally gone, and all for a good cause.

The other topic, however, remains tantalisingly unresolved. Grant is constantly told he should be playing at a higher level overseas, to the point where the unsolicited advice he receives is almost as tired as the jokes about his ironic ex-haircut.

And yet an increasingly large part of the 29-year-old is keen to leave behind the comforts of the A-League, where he has played his whole career to date, and finally make the leap.

“I’ve had a few things – [there’s been] a shitload of interest,” Grant said.

“There definitely has been some offers I didn’t fancy at the time. The ones I said no to, I don’t regret. There’s ones that were in the pipeline that I’d have loved to have happened, but they never happened … some cool opportunities that didn’t work out in the end. 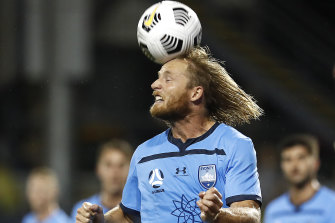 Rhyan Grant is still keen on a move overseas before he retires … but will have to do so without his trademark mullet.Credit:Getty

For now, Grant is content to stay at the only club he’s ever known, Sydney FC, who this season are gunning for a record third straight A-League championship.

The mullet might be gone, having been lopped off by his teammates on Thursday morning as part of the World’s Greatest Shave, but it has been around for easily the best few years of Grant’s career.

He began growing it after recovering from his second ACL injury, producing a run of form so good it catapulted him into the Socceroos first-choice starting team. Grant went on to play every game at the 2019 Asian Cup in the UAE – where Australian officials had to scramble upon their arrival to check he didn’t break the country’s rules on “unethical” haircuts.

Thanks to a few Sydney fans on social media, Grant is also now across the biblical tale of Samson, the Israelite warrior who lost his immense physical strength when he cut his hair.

“I was a bit worried about that too, to be honest,” he said. “The last couple of years, a lot of good things have happened, so hopefully I don’t lose any of that and things continue to go my way.

“I don’t want to say it’s all thanks to the mullet, but maybe it is. I think it just translates to just being yourself – if you be yourself you get the best out of yourself, so it could even be a story in that.”

Grant was inspired by teammate Luke Brattan, who himself raised $30,000 by getting rid of his own audacious mane for the World’s Greatest Shave last year after his mother and sister were diagnosed with cancer.

Even Brisbane Roar striker Dylan Wenzel-Halls, who infamously pulled at Grant’s mullet during a game last year, has chipped in with $80 and a message on Twitter – which suggests the tensions between the pair have simmered ahead of Saturday’s showdown at Netstrata Jubilee Stadium.

“He got the chance to have a bit of a tug on it so it’s only right that he contributed towards it,” Grant said.

“He didn’t have to do anything, so that was nice, and there’s been heaps of other players. As ordinary as the haircut was it’s nice to be able to get something good out of it.”