Why it’s time to get very excited about Jude Bellingham

When you’re not only playing but impressing in a Champions League quarter-final at the age of 17, do you ever stop, take in your surroundings and suddenly have to pinch yourself? “Not really, there’s a reason I’m here,” Jude Bellingham said during his round of post-match interviews, adding with charming, self-effacing innocence, “I’m not bad at football.”

He’s right, he’s not. And though it would be silly to hype up a young prospect any more than is strictly necessary, you wonder whether there is sufficient excitement about the player England have on their hands.

Bellingham became the second-youngest player to start a Champions League quarter-final when walking out against Manchester City on Tuesday night. The career trajectory of the youngest – Bojan Krkic, then of Barcelona and now at Montreal Impact via Stoke City – is a warning that nothing is guaranteed to even the most precocious talents.

Pitfalls await every young player, even those who reach the summit of the game and stay there. The few who reach the top especially fast have to show an even greater degree of level-headedness and maturity than their peers. But even if judging only by Bellingham’s reaction to his disallowed goal at the Etihad, he has those qualities in spades.

While all the attention was on Erling Haaland, his teenage team-mate from Stourbridge came much closer to writing his name on the scoresheet. With the score at 1-0 to City, Bellingham took advantage of Ederson’s misplaced confidence, stole the ball off the goalkeeper’s toes, then rolled the ball into an empty net.

It was a perfectly timed tackle – the type of front-foot pressing in the final third that Bellingham has regularly showcased in the Bundesliga this season – and more importantly, a legitimate goal.

Television replays proved as much but referee Ovidiu Hategan did not think to give himself an opportunity to review the footage. By erroneously blowing his whistle for a foul before Bellingham had time to put the ball over the goal-line, the official prevented VAR from intervening and denied Dortmund an equaliser. To top things off, Bellingham was also booked.

Jadon Sancho, still recovering back in Dortmund from a thigh injury, vented his frustration on social media. Bellingham’s younger brother Jobe – a prospect in Birmingham City’s academy – tweeted a screencap of Didier Drogba’s infamous ‘disgrace’ rant from Chelsea’s semi-final defeat to Barcelona in 2009 without further comment.

Bellingham himself opted for the eyes emoji alongside photographic evidence of him winning the ball cleanly from Ederson but even though he had a case, he was composed, fair and philosophical in his interviews.

“I definitely think I won the ball fairly,” he said. “It’s a bit frustrating in a time when they’ve got so many cameras and so many TVs watching the game that they don’t wait for me to put it in the net and then check it but as I’ve said, it’s football, it’s life and you’ve just got to get on with it really. All I was told that I’d been booked and it’d be a free-kick for them.” 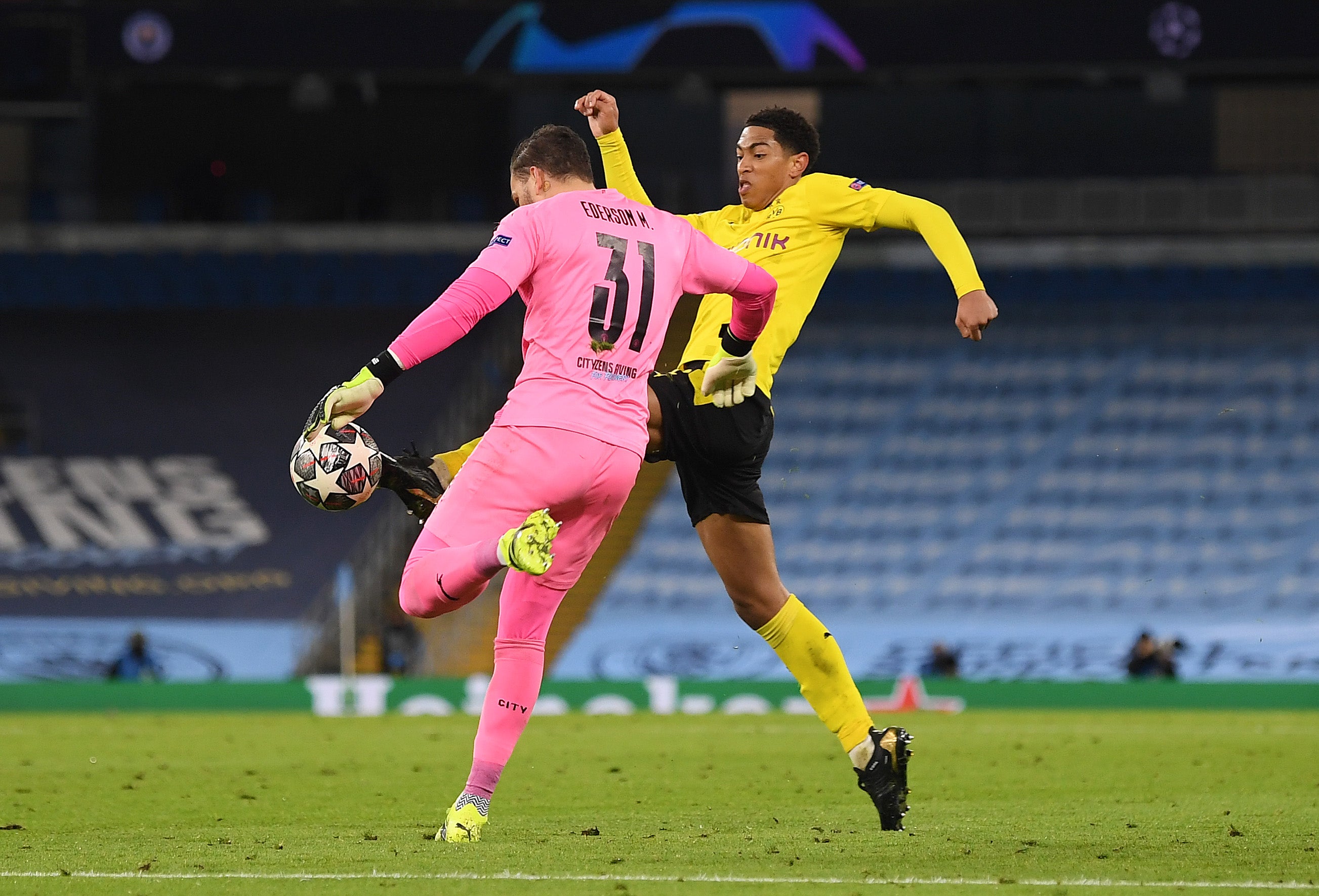 It was a shame it was not allowed. It would not only have been Bellingham’s first-ever Champions League goal and the first City had conceded in 742 minutes while playing in European football’s elite club competition but a statement moment. Not to worry, though. He would have a telling hand in Dortmund’s equaliser once it eventually arrived, giving Rodri the runaround and combining brilliantly with Haaland to set up Marco Reus.

Phil Foden’s winner six minutes later ensured that City will have the upper hand for the return leg in Dortmund next week and that he, rather than Bellingham, would be the young English prodigy plastered across the morning’s back pages. At the same time, this first club return to English football felt like the evening on which Bellingham announced his talent to his own public.

Up until now, it has felt as though his performances for Dortmund have been going under the radar in his home country, as though a 17-year-old English midfielder starting regularly for one of Europe’s top clubs is not worthy of attention. And like with Sancho, it is surprising how rarely his name has been mentioned in discussions about this summer’s Euro 2020 squad, as if the pair of them are playing behind an iron curtain rather than on BT Sport 3.

Gareth Southgate has not ignored Bellingham, including him in his last two England camps even when his availability was in doubt due to travel restrictions and when he could have sent him with the Under-21s to a competitive youth tournament. Even so, he only trusted Bellingham to play 45 minutes during the most recent break, and even then only as a substitute against San Marino.

Perhaps it is all a bit too soon for a 17-year-old. Maybe you can never be too cautious with young players, but that does not appear to be Dortmund’s approach. They have seen Bellingham up close every day since his arrival and decided that, like Haaland, Sancho and others before him, he is ready to compete at the highest level.

So far, it seems as though they have made the right call. Maybe it’s time English football followed suit and allowed itself to get a little more excited.