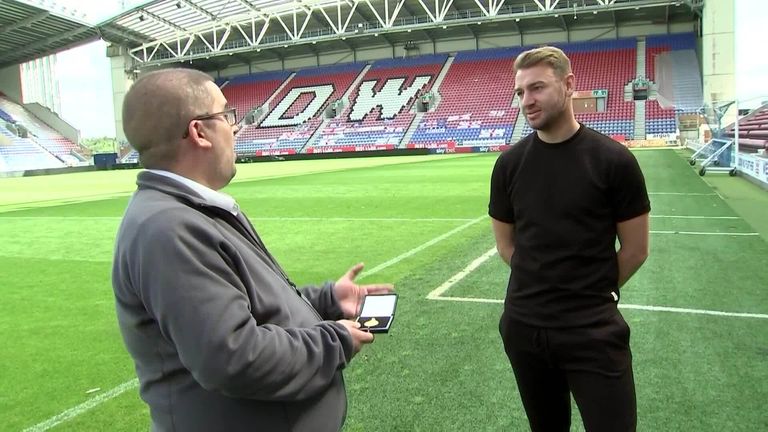 Wigan fan Mark Holdsworth, who had won goalkeeper Jamie Jones’ League One winners medal in a fundraising raffle, has handed it back to him as a token of appreciation for his efforts in trying to save the ill-fated club.

The fundraiser, which raised £6,500, was part of a wider campaign organised by the Wigan Athletic Supporters Club – who have raised over £600,000 in total – allowing the Latics to survive as they continue their search for new ownership following administration.

Earlier this year, Wigan fans raised £200,000 to allow the team to complete the 2019-20 Championship season, but they were relegated this summer after a 12-point deduction was imposed by the English Football League.

It believed former Barnsley and Nice chief-executive Gauthier Ganaye is currently part of a group looking to take over the Latics, but the August 31 deadline imposed by Wigan’s administrators Begbies Traynor to buy the club has passed.

With the club facing more uncertainty, Jones was delighted to receive back the medal he won in the 2017-18 campaign, as fan Mark handed it over almost immediately after picking it up.

“I’ve done it for a reason, to raise money, and it’s done that,” Jones said. “He’s come back with an amazing gesture and it will mean the world to my family in the future.

“The money keeps coming in, and we need to keep that drive going to get the club where it ends to be to survive.”