Leuven: France’s Julian Alaphilippe retained his men’s road race title at the cycling world championships in style after attacking relentlessly in the finale, capping a remarkable team performance on Sunday.

Alaphilippe made the decisive move on the short climb up to the Sint Antoniusberg – 17 kilometres from the line – and never looked back, becoming only the seventh rider to win consecutive titles. 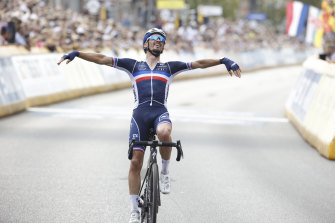 He reaped the rewards of his team’s tactics after the French shook up the race throughout to wear down their opponents, notably the Belgians.

Michael Matthews was the only Australian to finish the race, placing 25th, some 6:03:01 off the pace.

It was also Alaphilippe’s instincts that made the difference as he crossed ahead of Dutchman Dylan van and Denmark’s Michael Valgren respectively.

Alaphilippe was booed by a small number of Belgian fans who had turned out in the hope of seeing odds-on favourite Wout van Aert claim the rainbow jersey. In the end, their local hero finished empty handed.

“In the finale the fans were asking me to slow down and they didn’t have nice words … I want to thank them because it really motivated me,” said Alaphilippe, who also won solo in Imola, Italy last year.

“I just wanted to shake it up – I did not think it would eventually stick.”

While early attacks by the French were part of the plan, Alaphilippe’s late moves were not.

“I told Julian to follow the attacks and then counter. He did the opposite, he attacked several times on his own. So it was his instinct that spoke. He scared me anyway, the idiot,” said team manager and former French road race champion Thomas Voeckler.

Benoit Cosnefroy was the first notable rider to attack with 180 kilometres left, aiming to wear his rivals down and avoid a sprint finish that would have favoured Dutchman Mathieu van der Poel, Van Aert or Italy’s Sonny Colbrelli. 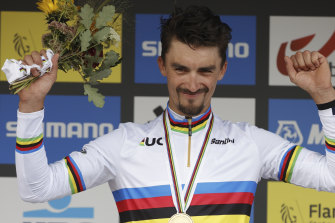 A familiar sight: Julian Alaphilippe is back in the rainbow stripes after winning in Leuven on Sunday.Credit:AP

It was then Valentin Madouas who upped the pace and he formed a group of a dozen breakaway riders including the prodigiously talented 21-year-old Remco Evenepoel.

But the young Belgian sacrificed his own chances for Van Aert, who simply did not have the legs to follow Alaphilippe when it mattered and finished a disappointing 11th.

Alaphilippe had attacked earlier on the Wijnpress hill but the move was foiled. When he went again on the Sint Antoniusberg, the group of favourites was blown to pieces.

Four men – Van Baarle, Valgren, Belgium’s Jasper Stuyven and American Neilson Powless – lagged 10 seconds behind and it appeared Alaphilippe would be caught. But the Frenchman found his second wind in the closing stages, riding away to become the first man to retain his title since Slovakian Peter Sagan won his third consecutive rainbow jersey in 2017.

“I came here relaxed, knowing I had good legs. But I was not even dreaming of winning a rainbow jersey again,” said Alaphilippe after the 268.3 kilometre ride between Antwerp and Leuven.

Only 68 of the 180 starters completed the course, which was marred by early crashes that also ended the chances of 2019 champion Mads Pedersen of Denmark.