Anderson deserved to say farewell to Australia with the ball

If you are a cricket fan whose been stuck under a rock for 20 years, wondered about England’s attack for the fifth Test and was not entirely sure who or what a Jimmy Anderson is/was, you might do the modern thing and consult a search engine.

I haven’t been the former, but I did the latter. The first entry that appeared may well have come from a parallel universe; James (Jimmy) Drew Anderson: a major league pitcher with the Reds, Pirates, Red Sox and Cubs born in 1976. He made his debut in Major League Baseball just two years before James (Jimmy) Michael Anderson, Burnley, Lancashire and England, first appeared for his country. Jimmy Drew faded quickly through “loss of control and recurring injury”, Jimmy Michael lasted a mere 20 years at the top of his profession. Their universes didn’t collide.

The question of timing was discussed last week, England seemingly lacking the quality on multiple fronts. When Joe Root and Pat Cummins exchanged team sheets on a coolish, damp Hobart Friday afternoon, Jimmy of Burnley was missing. At least the Poms are consistent.

Jimmy Anderson of 169 Tests, 194 ODIs and more than a thousand first-class wickets was consigned to bib warming. David Warner and Usman Khawaja sighed in relief, the best bowler in the opposition wasn’t playing – again. The reason given was a hamstring niggle, although his replacement Ollie Robinson ended the first day with a niggle of his own.

The Bellerive curator fooled us all, the expectation of a flat, batter-friendly and brown-flavoured strip was considerably astray. His grand reveal got hearts palpitating, bowlers sharpened spikes looking forward to a trundle and batters began checking early flights out of Dodge. The last time the locals saw a pitch this green was midway through the last AFL season. At 39 years of age, Anderson the warrior looked up at grey skies then down at emerald lushness. His studs sank into the top layer, the calcified lumbar bones stirred, the scar tissue in the ankle ligaments bubbled and the tortured toes reckoned they could bear yet another contest. Captain and coach thought otherwise.

The conditions could not have suited Anderson much more than if the match was switched to Old Trafford in May. Anderson declared he was fit and ready to go. Perhaps the workload in Sydney and the mental examination of saving the Test with the bat combined with a short turnaround time had overwhelmed the veteran, not that he was saying so. He has bowled only 104 overs in three Tests, 42 of those in Sydney and only 12 of which were in the second innings. For a man with a bowling-hardened body, this is not an amount to exhaust him. 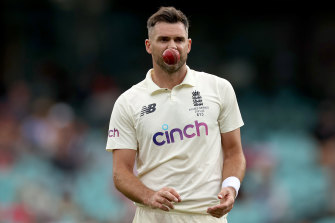 The fourth Test at the SCG is almost certainly the last time James Anderson will play in Australia.Credit:Getty

Pundits more akin to the state of English cricket have called for a refreshing of stocks. No longer is experience valued on the field yet it is a quality that cannot be taught – experience must be lived and acted out. Yes, young players need to find experience somewhere, somehow and selectors must have the unction to pick and persevere, a notion notably absent from England this Ashes.

Anderson has battled through stress fractures, torn calves and form slumps to be the most experienced. Attempts to “fix” his “eyes closed, head up his armpit, check that mid-off hasn’t drifted” mechanics may have been well-intentioned, but his remarkable bowling action became one of the most dependable in international cricket.

It takes quite some skill to bowl outswing when your release point is way past vertical, even harder to then swap to inswing with no outward signs of change. The man has bowled spells of genius but he has not been allowed to have a last Ashes hurrah at the Gabba or Bellerive when all the boxes were primed to be ticked. Root called correctly and inserted Australia, further stomping on Anderson’s tortured digits. The decision to bowl first, clearly influenced by the green and grey, was courageous nevertheless given Test cricket’s penchant for punishing those who bat fourth. The more critical observer may have seen the call as a protective move for England’s cheesecloth batting line-up rather than a fillip for the bowlers.

I can’t yet tell just how well Anderson has handled the omission. Watching helpless from the boundary’s edge as Marnus Labuschagne, Travis Head and Cameron Green reversed an early England advantage is frustrating for any player made 12th or beyond, especially when in good form and looking for a 641st wicket. His fast bowling brother-in arms, Stuart Broad, was less than impressed with his own early Test absence and blared on social media to inform those selecting starting XIs to understand their folly and let the public understand his own pain. Anderson’s expression may come after his return home, if he has indeed played his last Test.

The great pity for Australian fans is they didn’t see the final grand parade of one of the games’ best swing bowlers. Many Australians may now have their clearest memory of him defending back-footed, unhurried and unworried for a glorious draw; that vision will not do him justice.

Fast bowlers don’t mark out their run-ups on the main stage into their 40s, they stumble, limp and moan into retirement well short, sometimes in their 20s. Can Jimmy see out another six months and turn that theory on its head? It doesn’t look likely given the current penchant for younger men Robinson, Mark Wood, Chris Woakes and Craig Overton, with Jofra Archer recovering and perhaps Broad as a support act for a few more series.

In a parallel universe, Jimmy Drew Anderson is revived, re-contracted and pitches the Chicago Cubs to a World Series. In this universe, Jimmy Michael Anderson retires a few days short of his 40th birthday, his resilience of body and mind, his ability to embrace the physical pain and bowl nearly 13,000 competitive overs a remarkable feat, worth celebrating. It would have been a fine parting gesture to play him in Hobart but, more than that, it would have been a sound cricket decision.