Archer 'is a huge asset in any form of the game', insists Morgan

Jofra Archer ‘is a huge asset in any form of the game’, insists Eoin Morgan as England’s white-ball captain defends seamer over his commitment to Test cricket and says he is easy to manage as a player

Eoin Morgan left no doubt on Thursday about the importance of Jofra Archer to England’s World Cup aspirations as he prepared to welcome his prize fast bowling asset back for Friday’s first Twenty20 international.

Archer returns to the white-ball game where he has had the bulk of his success after the elbow problem that led to him missing two Tests against India and raised fresh concerns about his longevity and even commitment to the longer game.

They were concerns that were addressed eloquently by Archer in his Sportsmail column on Thursday where he expressed his frustration at comments from those who ‘don’t know what makes me tick.’ 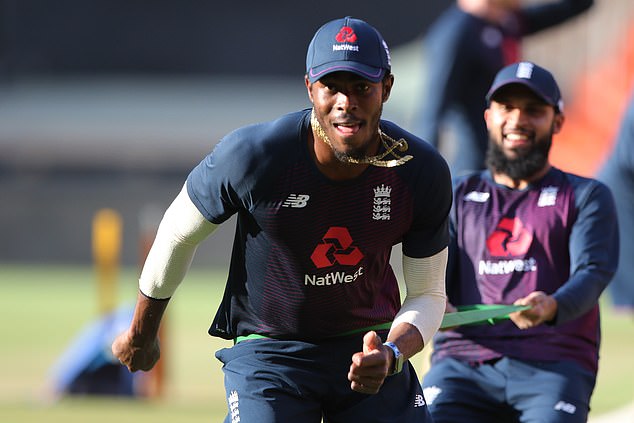 Morgan, clearly, is not among them and insists he knows how to get the best out of a rare talent who, so far in his short England career, has invariably looked happier with a white ball in his hand than a red one.

‘Jofra is a huge asset in any form of the game,’ said Morgan ahead of Friday’s first of five short-form games against India in Ahmedabad. ‘He obviously has express pace, can bowl cutters, variations and a very good yorker.

‘He is threatening whenever he comes on and if you look at his T20 performances they suggest he will have a significant role to play when it comes to the World Cup.’

But is Archer easy to manage? ‘Yes he is,’ said Morgan. ‘The more I have got to know him the better our relationship has become and the more I have grown to enjoy his company away from the game.

‘He’s always been engaging and is a very funny guy. Jofra is younger than most players in our squad and has different interests to many of them but he loves playing cricket in front of big crowds and enjoying what he does.’

Archer will be part of a full-strength England side on Friday in front of what is expected to be a crowd of 80,000 at the biggest cricket stadium in the world and Morgan says it is right his T20 team have been prioritised ahead of October’s World Cup.

‘Before we went to South Africa in November we hadn’t had our first choice side available for a long time,’ said Morgan. ‘So we earmarked this tour specifically as preparation for the World Cup and I’m grateful for that. I don’t see any time during this summer where it will happen again.’

That World Cup preparation, Morgan says, includes the thorny subject of the Indian Premier League. Unsurprisingly, he believes his best players are right to commit to a full IPL campaign rather than rest after this T20 World Cup dress rehearsal series and the three 50-over matches that conclude the India tour.

‘The IPL is huge in terms of the development process players go through rubbing shoulders with the best in the world and being exposed to the pressures of being an overseas player at the biggest franchise competition,’ said Morgan. ‘The value of them being there given it’s the year of a World Cup that is also being played in India is brilliant.’

Morgan was reluctant this week to give the exiled Alex Hales encouragement over his chances of forcing his way back into the T20 squad in time for the World Cup. But there were positive words on Thursday for another batsman who hasn’t played in the T20 side for two years for very different reasons in Joe Root.

‘Joe was a big part of us getting to the final of the 2016 T20 World Cup,’ said Morgan. ‘He is under huge strain doing what he does as Test captain so he has needed a rest. But Joe could be an option come the World Cup.’