Madonna di Campiglio, France: Australian Ben O'Connor won the 17th stage of the Giro d'Italia, a 203km mountain trek from Bassano del Grappa, as Joao Almeida retained the overall lead at the end of a quiet day for the top contenders on Wednesday.

O'Connor gave the NTT team, who are looking for a sponsor for next year, a much-needed win as he prevailed from the day's 18-man breakaway ahead of Austrian Hermann Pernsteiner and Belgian Thomas de Gendt. 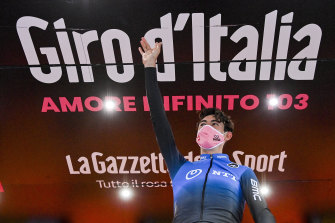 Ben O’Connor celebrates his win in stage 17 of the Giro d’Italia.Credit:AP

The Australian, who said he felt 'bitter' after finishing second on the preceding stage, described the win as a dream come true.

"Yesterday it was so close and to pull [it] off today in the mountains I dreamed of, it means a lot," he said.

"Maybe it hasn't sunk in yet but when I crossed the line there was full gas crying, so it means a lot."

Portuguese Almeida faced only one brief attack from Australian Jai Hindley in the final climb up to Madonna di Campiglio as he stayed 17 seconds ahead of Dutch Wilco Kelderman in the overall standings. 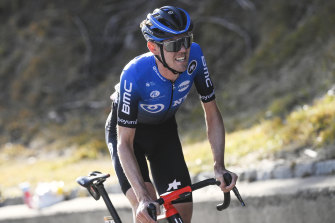 O’Connor finished second on the previous stage at the Giro.Credit:AP

"Today it was a hard day, a lot of climbing but I had the perfect team with me," said Almeida.

"That's one more day in the Maglia Rosa. Team Sunweb tried to attack but I was feeling good. Tomorrow it's another day, I look forward to it.”

There will be no hiding among the top favourites in the 18th stage on Thursday, however, as it takes the peloton over 207km to the Laghi di Cancano, through the Passo Stelvio, 2756 metres above sea level where the temperatures are expected to be just above zero.

It might be the last chance to make big differences as organisers were forced to re-draw the route for Saturday's 20th stage due to COVID-19 restrictions in France.

The race will no longer climb the 2744m-high Colle dell'Agnello and cross into France for the Col d'Izoard, instead climbing Sestriere three times.

The new 190km stage will include just over 3500m of climbing on wider, faster roads instead of the 5500m of vertical elevation of the original 198km route.

"The French authorities have withdrawn the permission for the race to go on their roads due to the new anti-COVID-19 crowd rules," race director Mauro Vegni told Italian broadcaster Rai.

"The new stage gives us the guarantees that it can be held if there's bad weather. We haven't been able to create the amount or difficulty of climbing but there will still be around 4000m of climbing."