Big Bash considering radical change to time-out rule with batsmen given 75 seconds to get to the crease… and failure to do so will give bowlers a delivery at UNPROTECTED stumps!

Bowlers will get the chance to dismiss batters before they have faced a ball as part of radical plans to speed up Big Bash League matches.

Under the proposed changes to the BBL playing conditions – which will be presented to players this weekend – if new arrivals to the crease are not ready within 75 seconds of a wicket falling, the umpires reserve the right to ask them to stand aside.

The bowler would then get a delivery at the unprotected stumps – hit and the batter’s innings is over before it has begun, miss and they are reprieved. 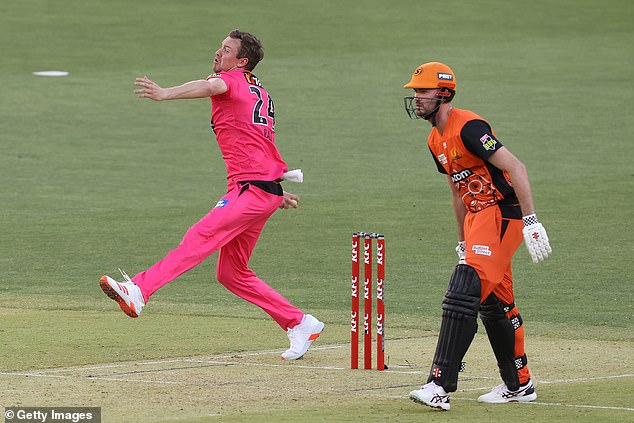 Current playing regulations which allow only 60 seconds have not been policed properly, allowing players to slow the pace of a game towards that of international cricket, which allows three minutes under its timed-out law.

It is hoped such a threat will help shorten the lengths of matches – which have swelled to well beyond three hours in some cases.

A countdown clock on the scoreboard would begin from the moment a dismissal is confirmed.

In addition to encouraging more haste from the dugout to the middle, fresh gloves and drinks will only be permitted for batters at the end of the fifth, 10th and 15th overs under the suggested alterations to Australia’s domestic Twenty20 competition.