Cameron Bancroft on his ball-tampering shame

‘Watching it back is so difficult… I made a big mistake’: Australia batsman Cameron Bancroft admits he is ashamed as he reflects on his involvement in ball-tampering scandal

Eight months on and the noise of that unforgiving Edgbaston crowd is still ringing in Cameron Bancroft’s ears. ‘It was loud, it was intimidating,’ admits the Australian batsman.

‘The English chants have a certain sound to it. It’s a big mob-mentality and that’s exactly how it came across.

‘I knew there was going to be abuse and I knew the fans were always going to give it to us. But on the field, I couldn’t have pictured in 1,000 years that that’s what was going to happen.’ 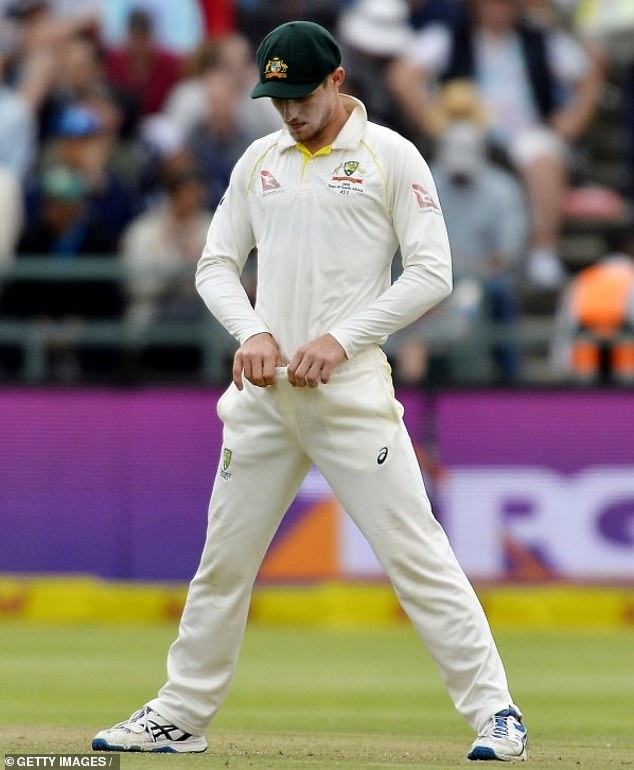 Bancroft is, of course, recalling the atmosphere at last August’s Ashes opener, which he has recently relived by watching The Test, the behind-the-scenes documentary about the Australia team.

The 27-year-old was in the firing line at Edgbaston as it was his first international back from his nine-month ball-tampering ban.

But that match also marked the Test returns of Steve Smith and David Warner – and it was the first time the Sandpaper Three had been in the same side since their day of shame in Cape Town in April 2018.

As well as the chants and boos, footage on the new Amazon Prime series shows Aussie players being abused getting on their team bus in Birmingham. So does Bancroft think fans went too far?

‘I guess it was part of the initiation of coming into your country and it was just what we had to deal with,’ he tells Sportsmail over the phone from his home in Perth.

‘I think at times Steve Smith probably copped the stiff end of the bargain a little bit. There were times where perhaps the crowd may have come across slightly insensitive. But I certainly know that Steve wouldn’t have had it any other way because he loves that stuff.’ 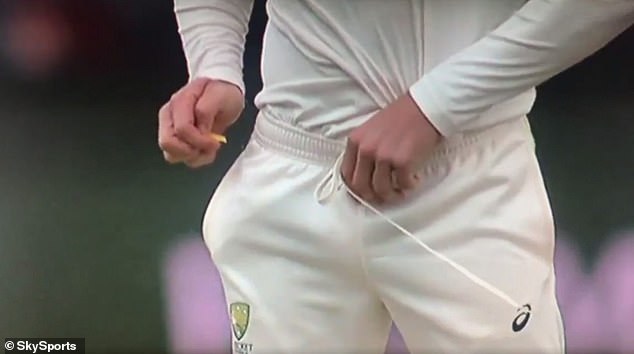 Indeed, Smith thrived off the hostilities and hit centuries in each innings as Australia breached England’s ‘fortress’ to win the first Test by 251 runs. In contrast, Bancroft appeared to let the booing get the better of him.

The opener could only muster scores of eight and seven and, after another two failures in the drawn second Test at Lord’s, he was dropped for Marcus Harris. He has not played for Australia since.

‘Even though for me the runs didn’t flow as much as I would have liked, I certainly felt that every innings I played I was feeling less restless and more focused and calm at the crease,’ says Bancroft. ‘But I didn’t do enough to continue that opportunity that I was given.

‘When I got back in the Test team, I couldn’t have been prouder or more excited. As it turned out, it was really short-lived. Hopefully next time I can stay in that team for a lot longer.’

After losing his place, Bancroft stayed as part of Australia’s squad for the remainder of the Ashes series. It meant he had a pitchside view of Ben Stokes’ Headingley heroics, not that he appreciated his vantage point at the time. 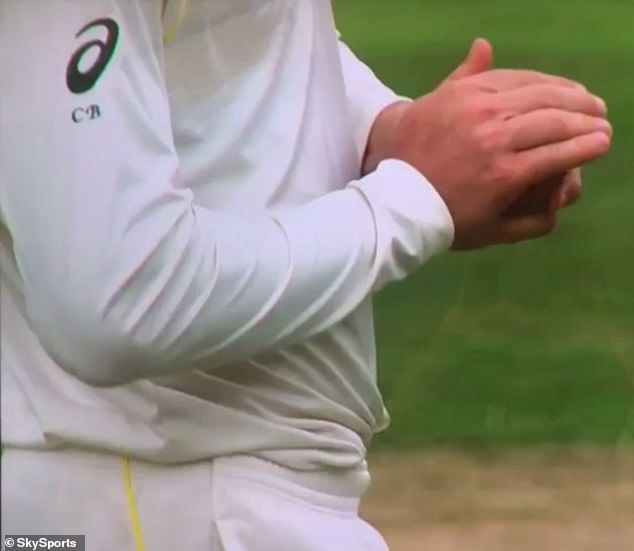 ‘All the players that weren’t playing were on the sidelines and we were all just looking at each other in disbelief. We expected someone to get out at some point and it didn’t happen that way. That might have been one of the most powerful lessons that we learnt.

‘It definitely hurt at the time but it will go down in history as one of the greatest games to have ever been played.’

Bancroft was also in the boardroom of the team’s hotel when Australia coach Justin Langer conducted his brutal Headingley post-mortem. The morning after their agonising defeat, Langer made his squad sit through every ball of England’s last-wicket partnership between Stokes and Jack Leach, a remarkable meeting which makes for compelling viewing on The Test.

‘It was pretty incredible and it was a very brave leadership to make,’ recalls Bancroft. ‘It was hard but sport is tough.

‘There were some mistakes that we made and some decisions that we could have made better during that game. What JL did was really make us all accountable for what happened.

‘It hurt us but it allowed us to move forward really productively and that’s what that exercise was about, which was good.’

Langer’s tactics did the trick as Australia regrouped to win the Fourth Test at Old Trafford and retain the Ashes urn. Despite being dropped, Bancroft cannot speak more highly of his coach, who is the undoubted star of the Amazon series.

‘He was coach of Western Australia for most of my career to date and he has been a mentor and a father figure at times to me,’ admits Bancroft. 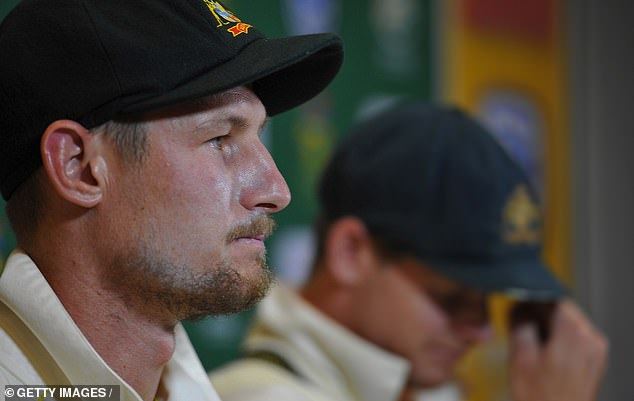 Bancroft, Steve Smith and Warner were banned in the aftermath of the sandpaper shame

‘He has an ability just to be really honest and get the best out of guys. He gives you the confidence to make you feel like you can do anything for the team.

‘At the same time he is also really hard on you if he feels he needs to be. He’s got that real balance and the way he came across in the show was great – it really depicted what I see Justin Langer to be.’

Langer was one of the few Australian beneficiaries of the ball-tampering scandal, becoming the team’s coach when his predecessor Darren Lehmann fell on his sword.

It is following his appointment that The Test starts its story. But the first episode also rewinds to Cape Town and makes painful viewing for Bancroft, who is reminded how his world come crashing down after he was caught roughing up the ball with sandpaper on Warner’s orders.

‘Watching those moments is certainly really difficult but at the same time I acknowledge that I made a mistake and I did so much hard work to really try and prove myself from that,’ he says. 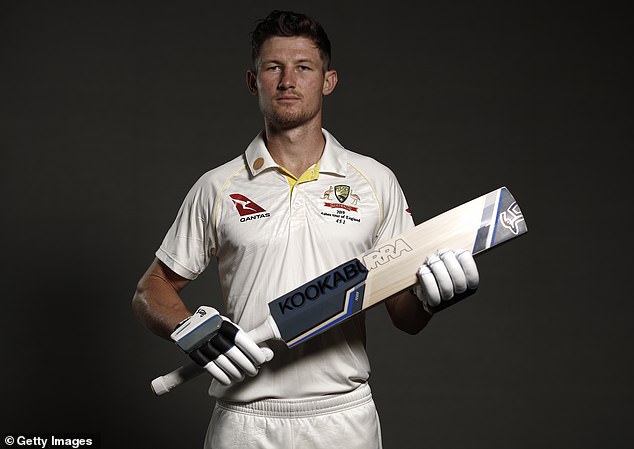 ‘To see it, it is a part of history and it is something I’ve had to cop hard and learn from. It is part of the product of that show and I think it shows how far the Australian team has come, which is great.’

Bancroft does not wish to dwell on his ‘mistake’ any more than that. He did his soul-searching during his ban, when he contemplated quitting cricket to become a yoga teacher.

‘I just almost detached myself a little bit from Cameron the professional cricketer for a while,’ he explains. ‘I had a lot of good fun making new connections in that industry and it just opened my eyes a little bit which was nice.

‘Certainly at that time, I felt like if I couldn’t play any cricket any more and I found some enjoyment doing something that was really fulfilling and didn’t involve scoring runs and playing cricket, that was a really good learning thing for me.’

Right now, it is yoga and meditation that is helping Bancroft get through his latest career break – one that has this time been enforced by a global pandemic rather than a global sports scandal.

‘My mediation is something that keeps me pretty grounded,’ he says. ‘I was really challenged and tested before but that doesn’t really change now and it’s a good foundation for me.

‘It’s something I always draw upon. I use it as a space to find some stillness, find some peace, no matter what is going on in the day. It’s quite a healthy thing for me to do so I try and continue to be consistent with it.’ 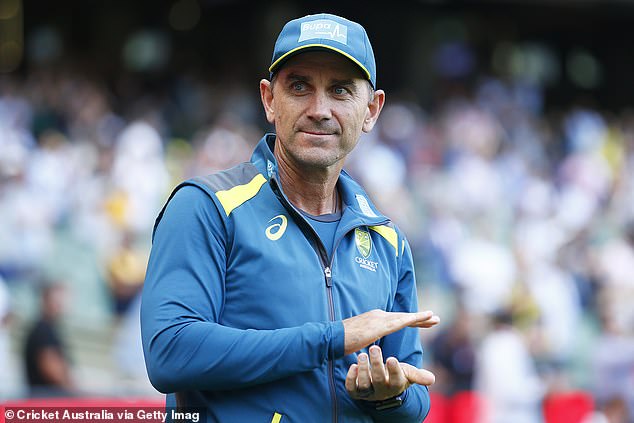 Were it not for the coronavirus crisis, Bancroft would be back in England now. He has signed as the overseas player for Durham, who he captained last year before his Australia recall, and would this week have been playing in their County Championship opener at Sussex.

But just like the rest of this country’s county professionals, he is now in limbo as he waits to see if the English domestic season can be salvaged.

‘All I know is that the county season has been postponed until at least May 28,’ adds Bancroft. ‘That is what I will plan for and if it changes, I will adapt to that change.

‘Lockdown has been frustrating but I’ve just decided to treat this obstacle as an opportunity to recharge.

‘It’s been a challenging six to 12 months or so cricket wise, so this break has been a little bit of a blessing in disguise. I will make the most of it and come back a better player. This is all part of my journey.’