“Cycle tracks will abound in Utopia.” Like most of HG Wells’ visions of the future, it would seem he was almost right, only it is now virtual cycling tracks which abound the strange dystopia we find ourselves in.

Like every sport, cycling is in a precarious position right now, perhaps even more so given its reliance on club membership and corporate sponsorship. Uncertainty lingers with a solution yet to be found for whether its big money-maker, the Tour de France, will be delayed or can even take place at all this year, given that a vast travelling circus is the last thing epidemiologists would recommend. Several teams have announced salary cuts including Australian team Mitchelton-Scott, home of Britain’s Yates brothers, while the crisis has pushed Polish team CCC to the brink. On Wednesday, British Cycling announced it will place one third of its staff on furlough.

But over the past few weeks, new and experienced cyclists have lost themselves in cycling’s virtual ‘worlds’. The market leader is Zwift, which styles itself as a “game” rather than a bootcamp. With your bike hooked up to a sophisticated turbo-trainer and screen tracking your watts and kilometres, you choose a world to explore. Pick Yorkshire and ride through the streets of Harrogate, past the Royal Hall and Betty’s Tea Rooms. Pick New York and take a spin around Central Park. There’s even a chain of make-believe volcanic islands to climb, called Watopia.

Zwift’s popularity is in part down to its high-profile following. Last week Mark Cavendish went for a ride and was joined by nearly 4,000 recreational cyclists who asked questions as they rode. At a time when socialising is at a premium, this interactive element has drawn people in. Around 8% of Zwift’s total usage now comes through its social mode, up from 2% before lockdown, indicating that the weekend club ride and social get-togethers have moved online. Typically users clock around 1 million total miles per day, but recently that figure has ballooned to 3.5 million. Home-trainers are harder to source right now than an Andrex multipack.

“Over the last couple of weeks the cycling industry has seen an explosion in the sales of indoor cycling equipment, almost worldwide,” says Zwift’s Chris Snook. “Turbo trainers have sold out.”

Out in the real world, there are plenty of bikes on the road too, where they are still allowed. Data from Netherlands found an almost 100 per cent increase in afternoon cyclists since lockdown kicked in, with the fewest cars recorded on the road in 50 years. In Belgium, perhaps the most cycling-crazed nation on earth, riding with a friend was one of the few social activities which survived strict lockdown measures. “You can cycle as far as you want,” said the Belgian health minister Maggie De Block last week. “I think going out for a walk or a bike ride is healthy.” 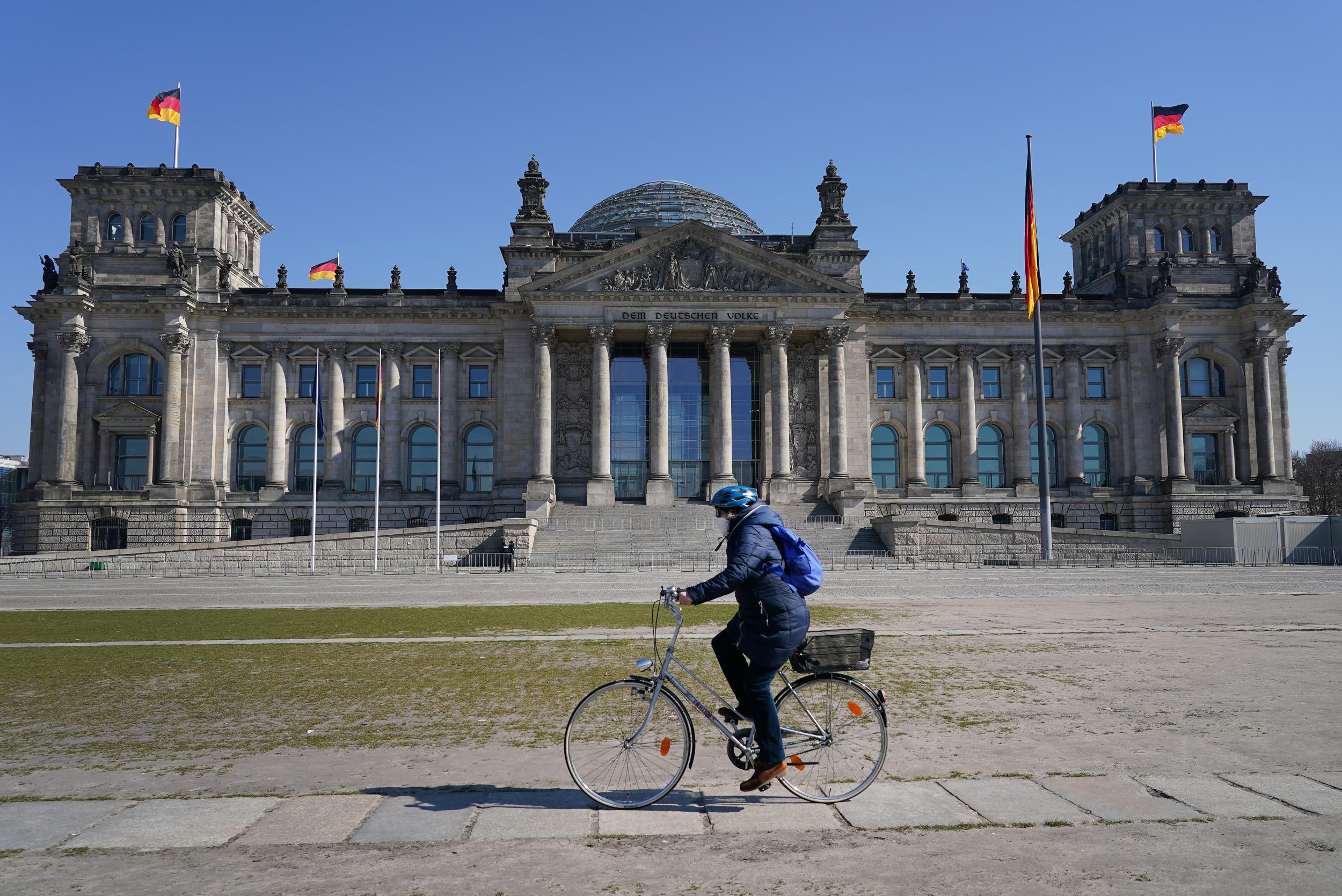 The bicycle has also proved vital for key workers commuting while maintaining social distance protocols, as an alternative to busy buses and trains. Cycle lanes in Berlin have been redrawn to provide more space, alongside signs which read: “Cycling to work protects people from infection #Flattenthecurve”. In the UK there are numerous hire schemes providing free bikes to medical staff, like Brompton Bike Hire, which has dished out 569 rides to NHS workers in London.

But, gradually, opportunities to ride in the open air are fading. In France cycling is effectively banned as the government lockdown tightens to a 2km radius around the home. In much of Italy cycling is not permitted even to exercise, while the rules initially caused confusion in Spain with some police officers stopping any cyclist, even those travelling to work.

The professional peloton is, by and large, having to abide by the rules as they wait to see when the sport might return. In some European countries they can apply for a permit to train, but most have been spreading the message to stay home and avoid injury which could take up valuable hospital resources, and it means they are taking to the turbo trainer too. Chris Froome has returned to his Monaco home while Geraint Thomas is back in Wales, and their teammate and the reigning Tour de France champion, Egan Bernal, has flown back to Colombia.

One rider in a particularly difficult spot is New Zealand’s road race champion, Shane Archbold. The Deceuninck-Quick Step lead-out man is holed up in a flat with his girlfriend in Girona, Catalonia, one of Spain’s worst-affected regions. “We’re on day 23 of lockdown,” he says, pausing Netflix to talk to The Independent. “We’re only allowed out to buy necessities – no cycling, no exercise. We’re trying to only go to the supermarket once every two weeks.”

Archbold had time to fly home to New Zealand when Spain began locking down, but chose to stay put. “In New Zealand you’re allowed to ride 2km from your house, and back home on the farm I probably wouldn’t have any issues with the local government or police if I went for a ride. But I don’t regret staying here.

“I do two training sessions per day [on my home trainer], two and a half hours each. Personally, I hate it! I like going out in the fresh air, but it’s OK. At first a friend on another team invited me on a Zwift ride. I took part in a race on there, which was extremely hard, but it’s nice to mix up. Otherwise it’s Netflix, Playstation… luckily we have a terrace so I can do some core stability work, we can play some table-tennis. We have air conditioning but it doesn’t cover the whole place, so summer could be a challenge when it gets up around 40 degrees.”

Like so many athletes, life is now a waiting game, and amid so much uncertainty, now more than ever the sport needs a little ingenuity. On Sunday the former Olympic champion Greg van Avermaet won a ‘virtual’ Tour of Flanders, raced on Zwift competitor Bkool, from the comfort of his house. Zwift plans to host more professionals racing one another over short, challenging courses, which fans can tune in to watch.

It is far from the real thing of course, and the briefly floated idea of a Tour de France ‘behind closed doors’ only highlighted the importance of fans inches from a rider’s face to give cycling its unique identity. But what cycling does have is a growing and committed base of home riders, and at the same time a place in modern life which, suddenly, has never been more important. At a time when much of the sporting community is faces a concerning future, the virtual cycling tracks offer some solace from the real world.