Reigning Cox Plate champion Sir Dragonet has been euthanised after he broke down during an innocuous trackwork incident at Moonee Valley on Saturday morning.

The stallion, who splashed onto Melbourne’s racing scene in last year’s weight-for-age championship under Glen Boss following his European career with Aidan O’Brien, was taking his final look around Moonee Valley on Saturday morning ahead of a Cox Plate title defence next week when he broke down. 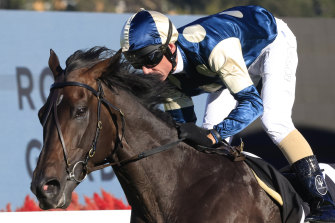 “We’re heartbroken to announce that Sir Dragonet has broken down during a piece of work at Moonee Valley this morning and was euthanised on course,” Ciaron Maher Racing said in a statement.

“In the year that the Dragon has been in our care, he has won our hearts with his exploits both on and off the track.

“Our condolences go out to his owners, connections and all who cared for this wonderful horse.

“It has left a hole in our hearts but we’re forever thankful for our time with him and he will forever remain a Cox Plate champion.

The son of Camelot was imported into Australia by Melbourne businessman Ozzie Kheir last year, when, after Jack Newnes slotted a post-siren goal for Carlton to beat Fremantle, Kheir – a Blues supporter – tried for a third time to negotiate a deal for Sir Dragonet.

Boss, who is currently in Sydney, had this week been approved to travel to Melbourne and quarantine for six days to ride Sir Dragonet in this year’s Cox Plate.

The horse was also anticipated to press onto this year’s Melbourne Cup for a second tilt.