Cricket Australia is increasingly basing its plans for the next 12 months around a projected 50 per cent loss in revenue as the game's national governing body braces for a sizeable hit caused by the coronavirus. 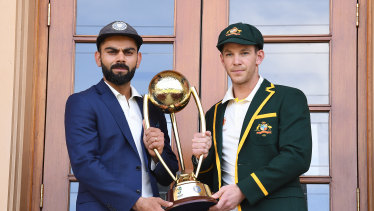 Australian cricket would be hit hard financially if next season’s Test series against India was scrapped.Credit:AAP

However cricket sources have confirmed to The Age and Sydney Morning Herald that CA is honing in on the 50 per cent figure in its projections for the next 12 months, which is supposed to feature the men's Twenty20 World Cup and the lucrative marquee home men's series against India.

Unlike the governing bodies of the major football codes, who have already copped colossal financial whacks as a result of their respective seasons being shut down in the early rounds, CA has considerably more time up its sleeve with next season still six months away, and no planned home international engagements until August's scheduled men's one-day series against Zimbabwe.

But while the exact impact of the virus on CA remains unclear, measures including cost-cutting are being discussed internally as part of broad plans to deal with the possibilities the body is staring at over the next 12 months, including the chance the Indian Test series – worth around $300 million – doesn't go ahead.

CA has already delayed the announcement of its central contract lists, hoping to gain further understanding of the sport's landscape.

Under the terms of the memorandum of understanding signed in 2017, players are bound to ride the financial waves experienced by the game as part of a revenue-sharing model.

Several player agents have privately queried CA's decision to delay the contracting period, noting that barely any major cricket in Australia has yet been affected by the pandemic.

According to its financial report last year, CA had net assets of almost $98 million including cash reserves of more than $26 million, although CA's financial model has long been centred around the influx of cash generated by the men's home series against India, meaning that next summer is arguably the one in which CA can least afford international cricket not to be played.

Meanwhile the Australian Cricketers' Association on Wednesday announced a $250,000 emergency assistance fund to help its members suffering financial hardship as a result of the virus.

The scheme is targeted at past players as well as current part-time female players who rely on an additional wage to supplement their cricket income.

Players can receive up to $2000 from the ACA although any sum greater than $1000 will be provided as a loan.

"Over the past couple of weeks, we've spoken to several members who are doing it tough, and we've been trying to help where we can," said Kelly Applebee, the ACA's general manager of member programs and relations.

"We've worked hard over that time to bring together a framework around the support we can provide, as well as some significant resources, and we encourage those members who have felt the impact of the coronavirus and who are still waiting on government support, to get in touch with us as we may be able to help."

The start of the Indian Premier League season has already been delayed from March 29 to April 15 although the prospect of that competition beginning next week is doubtful.

Several leading Australian players are contracted to IPL clubs, with their massive pay days at risk if the competition doesn’t go ahead at some stage this year.

Fringe Australian paceman Michael Neser was due to play for Surrey in England's County Championship however his contract has been cancelled as a result of the pandemic, which has placed England's home summer in grave doubt.