Cricket Australia will have to weigh up whether to allow its top cricketers to return to the Indian Premier League in September after the Board of Control for Cricket in India confirmed the Twenty20 tournament will resume in the United Arab Emirates.

But there appears some doubt about the Twenty20 World Cup going ahead from mid-October, certainly in India, after the BCCI said in a statement it had sought an extension from the International Cricket Council. 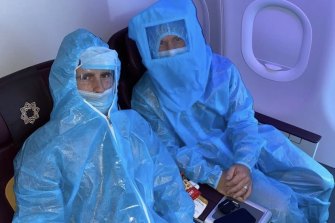 David Warner and Kane Williamson on a flight to an Indian Premier League match. Credit:Instagram

“The decision was taken at a special general meeting held virtually, where members unanimously agreed to resume IPL,” the BCCI statement read.

“The BCCI SGM further authorised the office bearers to seek an extension of time from the ICC to take an appropriate call on the hosting of ICC T20 World Cup 2021.”

The IPL was suspended at its mid-point this month because of an escalation in the number of positive coronavirus cases while matches were being held in Ahmedabad and Delhi. Australian coach Mike Hussey was one of at least seven players or coaches to test positive.

Almost 40 Australian cricketers, support staff and broadcasters have been in hotel quarantine in Sydney and were due to leave this weekend, having arrived home on a charter flight.

The Australians have a short tour of the Caribbean from late June and, ahead of the expected T20 World Cup and a home summer featuring a Test against Afghanistan and an Ashes series, CA will need to decide whether it’s in the best mental health interests of its players to spend even more time in a bio-secure bubble.

There are still 31 matches to be played in the IPL, which last season was held in the UAE. However, CA could decide the IPL will ensure players are fine-tuned for the World Cup, which could also be held in the UAE. Skipper Aaron Finch and fast bowler Mitchell Starc are among those without an IPL contract.

David Warner and Pat Cummins could be rested from the West Indies tour because of family reasons – others could follow after a draining year in several bubbles – but each has multi-million dollar deals with their respective IPL franchises.

The Australians could also have a short tour of Bangladesh in August but that has not been confirmed. However, the Bangladesh board is planning for five Twenty20 matches.