Cricket’s ‘big three’ could be only three, fears Smith

South African great Graeme Smith has urged the International Cricket Council to show leadership and fears Australia’s decision to pull out of its Test tour could lead to only three major nations competing by the end of the decade.

In describing relations between Cricket Australia and the Proteas as “strained” after Australia postponed this month’s three-Test series, Smith, who is now the Proteas’ head of cricket, fears world cricket will eventually be left with only power nations Australia, England and India playing top-level red-ball cricket. 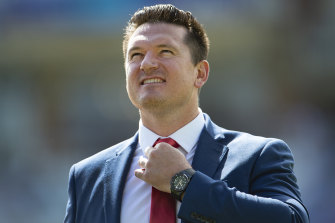 “The game needs leadership right now. It needs to understand the complexities. I don’t think world cricket wants three nations competing against each other in 10 years’ time. How does that benefit the game? It doesn’t,” Smith said on Monday night.

“I think the leadership of the ICC, if they don’t address these things now, and I think it has been fast-tracked because of COVID, these issues are becoming more and more relevant and amplified. I think the ICC found themselves a little bit off-guard with some of these issues now.”

India, Australia and England had formed a so-called “big three” ticket last decade because they generated more than 70 per cent of world cricket revenue, only for the ICC to eventually revoke the constitutional changes.

Cricket South Africa remains frustrated at Australia’s decision to postpone this month’s tour on health and safety grounds over fears CSA’s bio-security protocols were incomplete and not up to standard. CA’s decision was a major financial blow for CSA, and CA, in a leaked letter from CA chairman Earl Eddings, has offered to cover some of the costs.

Among CA’s concerns were how the squad would get from the Johannesburg airport to the Irene Country Club where it was staying for all three Tests split between Johannesburg and Centurion, and issues around how the team would get home if there was a positive coronavirus test.

CSA has written to the ICC seeking assistance amid concerns the power nations were agreeing to play each other, as Australia had done with India this summer and England and India are currently doing, while so-called second-tier nations were left behind. CSA could yet seek to have CA hauled before the ICC’s dispute resolution’s committee.

Asked by The Age and Sydney Morning Herald how relations between CA and CSA were, Smith replied: “I think the relationship is definitely strained at this stage.″⁣

“There is an effort definitely from our side to engage and to set up a meeting, more at board level now. But I think, more than anything, the ICC needs to have strong leadership going forward now. I believe COVID has even amplified the haves and the have nots and the relationships across the board and how cricket’s future landscape is going to be handled.

“The FTP [future tours program] is going to be a hugely challenging thing with potentially eight ICC tournaments in eight years, an extended IPL and and a lot of the calendar certainly dominated by England, India and Australia.

“It makes it extremely challenging for the rest of the member nations. When things happen like they just did happen it amplifies that stress on nations like us and the other members that are looking for good content. I think engagement certainly needs to happen to improve things between South Africa and Australia.″⁣

Smith said initial conversations about having the postponed Test series held over to next year or so had not been positive.

“The March window is done now. Our ops teams are trying to find an opportunity to fit it in this calendar cycle. I think for us it’s important that it happens in the calendar cycle,” he said.

“To be honest with you, we had some initial engagements with the ops side of Cricket Australia and it hasn’t been positive, trying to find a window, but we are working hard on that.”