The life of former Australian cricket star Dean Jones was celebrated in a private family funeral that included a lap of honour at the MCG on Saturday.

Jones, 59, died of a heart attack in Mumbai last month and his body was flown back to his home town of Melbourne. 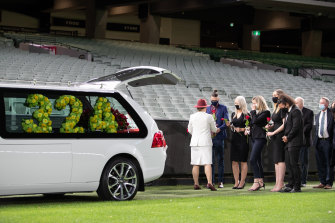 Dean Jones was farewelled by family in a small ceremony at the MCG.

His wife Jane, daughters Isabella and Phoebe and Jones' siblings were among a group of 10 to attend the small ceremony at a funeral parlour because of COVID-19 restrictions.

A hearse carrying Jones’ handmade Indian coffin adorned with the Australian flag and a floral 324 arrangement showcasing Jones' Australian Test cap number was then given a lap of honour around the MCG, with a video tribute on the big screen. The number was also his highest first-class score, against South Australia on the MCG in the 1994-95.

In a moving tribute, Jane Jones spoke of her heartbreak at the passing of her husband of 34 years. 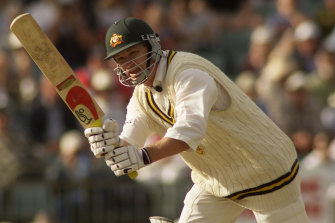 “We have been deeply moved by the outpouring of love for Dean over the last week and can’t thank everyone enough for their support and for sharing their memories with us," she said.

“It has been an awful time to navigate as a family but I could not have thought of a more fitting place to say goodbye to my husband than under the lights of his beloved MCG. What better way to honour him than with the music of his friends Elton John and INXS echoing throughout the empty stadium.

“We will forever miss Dean’s energy, his zest for life, passion for cricket and his love for us as a family.” 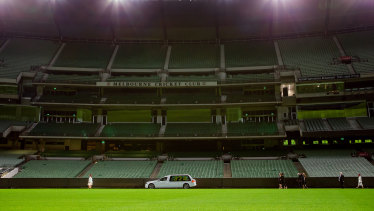 A lap of honour at the MCG.

Jones collapsed in a Mumbai hotel while in India commentating on the Indian Premier League. Fellow former cricketer Brett Lee attempted to revive Jones with CPR.

Jane Jones has spoken of having a public celebration of Dean's life once the COVID-19 restrictions have been lifted.

Cricket Australia is working through a range of options in how to commemorate Jones, with one possibility to have the annual one-day international player of the year named after the former dasher. Jones will also be honoured at this year's Boxing Day Test.

The Victorian great represented Australia in 52 Tests and 164 one-day internationals, revolutionising the 50-overs format with his fitness, dashing shot-making and superb fielding.

He was also a pivotal part of the team that won the World Cup in 1987 and the Ashes in 1989, helping to drag the side out of its mid-1980s mire. Jones, never afraid to speak his mind, also had flair off the field, and was the first cricketer to don sunglasses on the field.

As part of a tribute to Jones, writer Chris Driscoll penned a poem about his friend.

"Hold Him tenderly, O’Mother India
For he was Our favourite son
Place gently the zinc white ash on his resting forehead
Anoint him in Linseed oil
Place old willow by his side

We wait for him, for his return.
No full breath drawn
Shallow gasps and disbelief
This force of nature, impervious to all assault
But not our grief

Stumps are called
The bails removed
Player 324, no more to prove
Zinc cream, his baggy green
The Ashes Tests
Champion of Champions
Now lay him to his rest

As we hold him tenderly in our hearts forever."