‘Go back where you belong’: SCG probes alleged abuse by security guard

The operators of the Sydney Cricket Ground have launched an investigation into claims by an Indian cricket supporter that he was racially profiled and abused during the Sydney Test by a mid-ranking security officer who told him to "go back to where you belong".

Krishna Kumar, who lives in Sydney, was accompanied by a solicitor as he met Venues NSW legal personnel on Thursday to lodge an official complaint, telling them he felt "stripped and naked" by his treatment on the fifth and final day of the match on Monday. 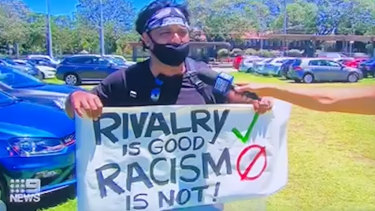 Krishna Kumar holds up his banner in the SCG car park.Credit:Channel Nine

Cricket Australia is continuing an investigation into reports by the Indian team last Saturday and Sunday that fast bowlers Mohammed Siraj and Jasprit Bumrah were subject to racial taunts by crowd members in Sydney.

Mr Kumar further alleges a group of spectators called him and members of the Indian team "curry munchers" on Saturday – the third day of the match, 24 hours before six men were ejected by police when Siraj stopped play and complained to umpires.

However, the venue is now confronting allegations against a member of the staff working at the game.

Mr Kumar, who attended three days of the third Test, has told Venues NSW he was targeted after attempting to bring four banners into the ground on Monday. Written on paper roll, they said: "Rivalry is good, racism is not", "No racism mate", "Brown inclusion matters" and "Cricket Australia – more diversity please". 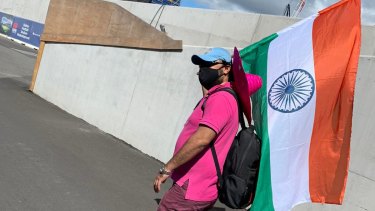 Krishna Kumar on day three of the Sydney Test.

As Mr Kumar left to return the banners to his car, he said the same official then told more junior guards to "make sure we give him a complete frisking when he gets back".

After having to empty out his bag in a lengthy check and being shouted at aggressively by the mid-ranking security staffer as he was ordered through a metal detector, Mr Kumar reported that, when he finally took his seat in Bay 11 of the Victor Trumper Stand, more security was added to the area.

They included a female guard of Indian origin to monitor, he believes, if he was "using any other language".

"To me this a pure case of profiling," he said. "They changed their entire formation so the guy next to the boundary is standing right in front of me and facing me."

Krishna Kumar took in three days of the compelling third Test between Australia and India.

The mid-ranking security officer who had confronted him at the gate was also patrolling close by, said Mr Kumar, who filmed a 65-second video of him "picking only on Indian fans".

"I want justice. I want accountability. I was feeling stripped, feeling watched and I went there to fight racism.

"Why should I be stopped from addressing racism, especially at a ground where it was debatable whether it was happening or not? 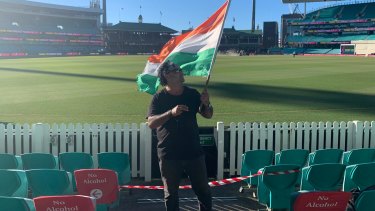 Krishna Kumar at the SCG during the third Test.

A Venues NSW said on Friday it was "aware of the matter and has met with the complainant".

"We are investigating the complainant’s allegations and we’ll make no further comment until our investigation is complete," a spokesperson said.

While the allegations against the security guard stem from day five of the match, Mr Kumar also told Venues NSW of the hostility in the crowd when he attended on day three. On that day he was sitting in Bay 18 of the Trumper Stand next to the sightscreen and near a group in traditional Rajasthani dress called the Fans of India.

"I was waving the Indian flag and the same set of guys told me to 'stop waving the f—ing flag' and I was told to 'shut the f— up and sit down'."

The group responsible were five or six young men in their late teens and early 20s, seated several rows behind him in the sparsely occupied concourse, Mr Kumar said.

While he did not hear slurs such as "brown dog" and "monkey", which the Indian team have told the Cricket Australia investigation they were called, he reported other vulgar and witless sledges from the young men.

Among them was repeated yelling at Siraj, whose father died in November, that "your mother knows me", and that wicketkeeper-batsman Rishabh Pant was "so fat because you're eating from the Centrelink dole".

Multiple spectators seated nearby have said the six men thrown out last Sunday were not being abusive towards Siraj.

But Mr Kumar believes the taunting and intimidation he witnessed on Saturday should have been dealt with by security at the time.

"Are you telling me the security did not hear this?" he said.

"Why do you need to wait for Team India's players to complain?"