The bouncer is going nowhere, Josh Hazlewood declared on Sunday, but the chairman of Australia's players association believes cricket needs to address concussion by reviewing why more batsmen are being hit in the head than ever before.

The risks associated with facing short-pitched bowling have been thrust back into focus with concussions suffered by would-be Test debutant Will Pucovski and Australia A tailender Harry Conway in the past week, as well as the withdrawal from a Twenty20 international of India all-rounder Ravindra Jadeja. All-rounder Cameron Green also sustained a mild concussion while bowling for Australia. 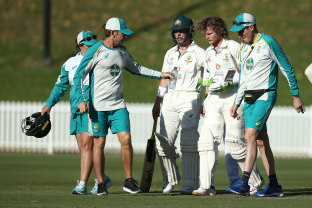 Will Pucovski was left rattled by a blow to the helmet last week at Drummoyne Oval.Credit:Getty Images

India are certainly preparing for that to be the case and are undertaking all manner of planning. Cheteshwar Pujara, who proved so difficult to dismiss in the Test series here two summers ago that he broke the record of Rahul Dravid for most deliveries faced by an Indian in Australia, was even seen having a tennis ball hurled short at him in the SCG nets over the weekend.

Of course, the projectile that will be careering in his direction in Adelaide will be significantly harder but the Indians are determined to take whatever measures they can to be ready for what Hazlewood and co have in store for them. 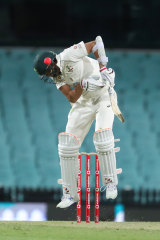 Harry Conway is struck by a short ball at the SCG on Friday night.Credit:Getty Images

It is a mode of bowling that Australian Cricketers' Association chairman and former Test wicketkeeper Greg Dyer agrees is fundamental to the sport.

Cricket Australia has been a global leader in dealing with concussion, trialling substitutes in the Sheffield Shield before the concept was introduced to the international arena last year.

But the latest round of concussions this summer has prompted the players' union boss to suggest a deep dive into an apparent proliferation of head knocks with particular attention on the technique of modern-day batsmen brought up in the era of Twenty20 aggression.

CA medicos John Orchard and Alex Kountouris have researched the incidence of blows to the head, finding in a study of the 2015-16 and 2016-17 seasons there was a head impact every 2000 balls in men's domestic cricket and a concussion every 9000 balls. They concluded that "the rate of concussion in cricket is higher than previously appreciated; however, the majority of patients recovered quickly, and players generally did not miss much playing time as a result".

A lack of data from decades ago makes comparing eras more difficult but in television commentary over the weekend former Test captain Allan Border also indicated he thought there were more batsmen being hit now than in his playing days.

"I think we need to do some analysis because it's very clear to me that the number of people that are being hit on the head … I reckon it's 20 times as many as used to be the case," Dyer said. "Is it a fundamental of the technique or is there some other issue that needs analysis? 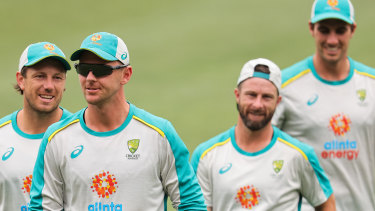 "It was a rarity for a bloke to get sconed back in pre-helmet days.

"There was a genuine need to watch the ball because if you didn't you knew you were in a lot of trouble.

"I think the helmet has created a sense of security which is not necessarily correct and there is also the possibility that it's created a situation where it is harder to avoid the ball because you've got that weight on you."

While player welfare and dealing with concussion is a primary concern of Dyer as ACA chair, he said "we have to find a different way to deal with the issue than banning the bouncer".

"You might as well have bowling machines if a fast bowler can't use a short ball to change the way a batsman is playing," he said.