Former Test paceman Geoff Lawson says it’s only a matter of time before a bowler is killed by a full-blooded straight hit, just days after Australia paceman Riley Meredith came perilously close to a serious injury in New Zealand.

Lawson is urging world cricket authorities to reduce the size of bats, adamant the power generated by modern-day bats poses a greater danger to players and umpires than short-pitched deliveries do for batsmen. 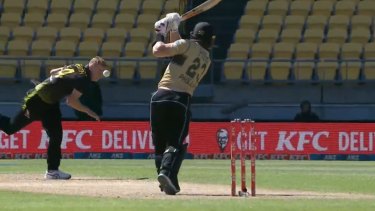 His comments come at a time when the game has launched a review into the bowling of bouncers to tailenders amid heightened awareness in world sport over the effects of concussion.

Meredith spoke of how close he came to disaster after a straight drive from Kiwi batsman Glenn Phillips in Sunday’s deciding Twenty20 narrowly missed the speedster’s head.

“I felt the wind on my back, I felt a little whizz,” Meredith told the Herald and The Age. ”I saw on the big screen it was only a couple of centimetres away. I was very lucky.

“It was all a bit of a blur. I looked up and it was coming straight out of the middle of his bat straight back at me scone. There wasn’t much going through my head other than try and get out of the way and not get filled in by it.”

Aware of players who deliberately smash the ball back at bowlers so confident they are of not being caught, Lawson is fearful of the consequences for players should they be hit in their follow through, and also for umpires.

“I’d be shitting myself if I was umpiring the high-level stuff,” Lawson said. “No wonder a couple wear lids and eye shields.

“Worst case they’re going to get killed, or you could have broken noses, jaws, teeth, eye sockets. If it hits you in the neck it’ll be worse.”

Australian young gun Cameron Green was concussed earlier this season after being struck by a drive from India’s Jasprit Bumrah at the SCG.

One-Test paceman Joe Mennie sustained a fractured skull after deflecting a shot from Martin Guptill to his temple in a county game for Lancashire in 2018, becoming the first player in England’s domestic first-class competition to be subbed out under concussion protocols.

Umpire Gerard Abood became the first on-field match official to stand in a game with a helmet in the 2015-16 Big Bash League for fear of being hurt. However, it is not practical for players to wear a helmet while bowling.

Lawson, who played 46 Tests, said that during his international career in the 1980s only the great Viv Richards and England’s hard-hitting batsman could generate such power that bowlers could not get a hand to caught and bowled attempts.

He wants the edges of bats to be trimmed back to 20mm (from 40mm) and the middle of the bat narrowed to a depth of 45mm from 67mm.

“They’ve still got more rebound than bats have had ever,” Lawson said. “If you hit in the middle it will still go 20 rows back but you have to hit it in the middle. You have to be a better batsman, you can’t just wind up and hit a six off the bottom corner.”