It was the first high-level contact between the two sides since the standoff began months ago in the Himalayan region. 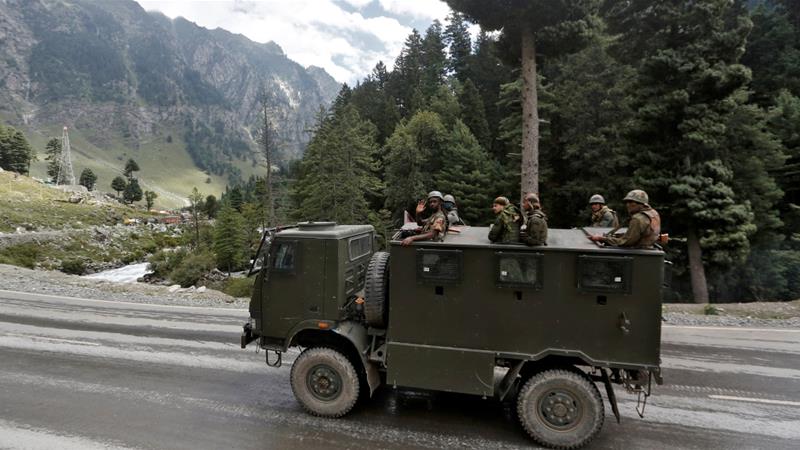 Defence ministers of India and China have met in the Russian capital as the two Asian nuclear powers try to resolve rising tensions along their disputed border in the eastern Ladakh region.

Neither side gave details of the meeting on Friday between India’s Rajnath Singh and China’s General Wei Fenghe – the first high-level contact between the two sides since the standoff erupted months ago in the Himalayan region, where a clash in June killed 20 Indian soldiers.

The ministers met on the sidelines of a gathering of the defence chiefs of the Shanghai Cooperation Organisation, which comprises China, India, Pakistan, Russia, Kazakhstan, Kyrgyzstan, Tajikistan and Uzbekistan.

“Peace and security in the region demands a climate of trust, non-aggression, peaceful resolution of differences and respect for international rules,” Singh said at the meeting.

Wei told Singh the two nations should “cool down” the situation and “maintain peace and tranquility,” the Chinese defence ministry said on its website.

However, it said responsibility for the tension “lies completely with India”. “Not one inch of Chinese territory can be lost,” the Chinese ministry said.

The disputed 3,500-km (2,175-mile) border between the world’s two most populous countries stretches from the Ladakh region in the north to the eastern Indian state of Sikkim.

The latest standoff is over portions of a pristine landscape that boasts the world’s highest landing strip and a glacier that feeds one of the largest irrigation systems in the world.

Tens of thousands of troops from the two nations have been squaring off in difficult terrain above 4,300 meters (14,000 feet) since border skirmishes erupted in April.

India accuses China of violating bilateral agreements by pushing its troops through the Line of Actual Control (LAC), the de facto border between the two Asian giants.

China, on the other hand, last week blamed India for trespassing over the LAC, saying the “move has grossly violated China’s territorial sovereignty”.

US ‘ready to help’

Meanwhile, US President Donald Trump on Friday said his country is ready to help resolve the India-China dispute.

Trump told reporters the situation was “very nasty”, adding that the two countries were “going at it much more strongly than a lot of people even understand”.

A US government source told Reuters news agency in Washington the US assessment is that neither China nor India are interested in pushing the dispute to the point that they would engage in war.

Trump, asked about the dispute at a news briefing in the White House, said Washington was talking with both countries about what it could do to help defuse the situation.

“We stand ready to help with respect to China and India. If we can do anything, we would love to get involved and help,” he said.

Trump has offered to mediate between the two nuclear-armed nations in the past. China has said there is no need for a third party to mediate, while India has also appeared cool to the idea.