Trainer Danny O’Brien has described the decision to call time on the racing career of star colt Russian Camelot as “heartbreaking” after injury prematurely ended the four-year-old’s racing days.

The son of Epsom and Irish Derby winner Camelot had strong claims to be Australia’s best older middle distance galloper after an impressive career, which saw him win twice at group 1 level and grab places in several other elite contests, including the Cox Plate and last Saturday’s All Star Mile.

Effective between 1600 metres and 2500 metres (the trip over which he won his first group 1, the SA Derby), Russian Camelot looked to have his best racing period ahead of him as he matured into a late season four-year-old, and five-year-old next campaign. 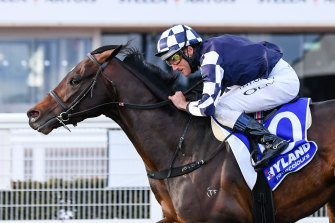 However, it was an injury sustained at The Valley last weekend, when he was runner-up to Mugatoo in the All Star Mile, that has proved to be his nemesis.

During the run, with jockey Damien Oliver, the galloper picked up a slight tear to his near side tendon, O’Brien explained.

His age, value and the fact that he would have had to miss what shaped as a lucrative Sydney autumn campaign meant the decision to retire him was taken now rather than later.

Part-owner John Wheeler bought him at Tattersalls Sales in England as he wanted to buy a horse with elite staying potential. But, because he was northern hemisphere bred, Russian Camelot was always up against it being several months younger than his age cohort in Australia, who were bred to southern hemisphere time.

Wheeler and his colleagues exercised plenty of patience and let the horse develop slowly – and their foresight was rewarded with a stellar career in which he netted over $2.4 million from just 11 starts. Apart from his first few runs, he always competed at the highest level.

Wheeler said he and his partners would be forever grateful for being involved with the horse.

“Today is an extremely disappointing day for us all, however, we will be forever indebted to such a magnificent horse, who gave us all the most exhilarating experience that we will never forget,” he said.

O’Brien, who trained Russian Camelot from the day he arrived at his stables from England, said: “Connections have made the heartbreaking decision to retire him instantly. Although we only saw him race 11 times, he made a significant impact on the Australian racing scene.

“He is a horse that turned up in any weather and under any conditions, gave his all and never let anyone down. He was just an outstanding racehorse.

“It’s a shame his career ends prematurely as I felt his best racing was ahead of him up in Sydney this autumn and to next spring and beyond,” O’Brien continued.

“However, I have no doubt he will have a significant impact on our industry for years to come through his stud career.“

His owners are working through a “variety” of potential stud deals.

Even though he was able to win a Derby – and in so doing become the only northern hemisphere horse to win a southern hemisphere Derby, when he triumphed at Morphetville last May – Russian Camelot was a horse with a turn of foot able to compete at the highest level over 1600m, a favoured distance in Australia.

He ran second not only in the All Star Mile but in the group 1 Makybe Diva Stakes at Flemington on his seasonal reappearance last spring, showing that he was not just an influence for stamina.