The Aidan O'Brien-trained Anthony Van Dyck is the first ever Epsom Derby winner to be entered for the Melbourne Cup – and he heads the weights for not just Australia's greatest race but the other leg of the big spring double, the Caulfield Cup.

In both races he has been given 58.5 kilos, while last year's Melbourne Cup winner Vow And Declare has gone up five kilos and will have to shoulder 57 if he is to repeat his 2019 Flemington win.

There is a full house of Derby winners from Australia this year including one of the most exciting gallopers to have been prepared for a spring campaign in many years, the Danny O'Brien-trained Russian Camelot, a northern hemisphere three-year-old, who has raced his entire career in Australia. 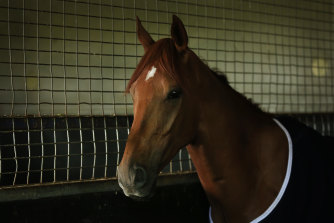 His victory in the South Australian Derby in May, when he beat highly rated Dalasan and the Victoria Derby winner Warning, was widely regarded as one of the most impressive seen in recent times. He has been given a racing weight of 53.5 in the Melbourne Cup and Caulfield Cup.

Anthony Van Dyck, a son of Galileo out of the one-time Mark Kavanagh-trained mare Believe'n' Succeed, has run some fine races but has yet to win since his Derby victory.

But such is the quality of his form lines – he has been competitive against the world's current highest ranked horse, Godolphin's Ghaiyyath, and the world's best stayer, Stradivarius – that Cup handicapper Greg Carpenter had little hesitation putting him at the top of the weights, on his own for the Flemington contest, and joined by his stable companion Japan, a dual group 1 winner over middle distances in Europe, in the Caulfield Cup.

Coolmore actually has the top three in the weights for the Caulfield race as their star mare Magical has been asked to carry 58 kilos, the highest weight allotted to a mare since Makybe Diva was given the same burden in 2005.

Last year's Irish Derby winner Sovereign – recently runner-up to superstar mare Enable in the group 1 King George VI and Queen Elizabeth Stakes at Ascot – has been handicapped at 57 in both Cups.

How many of the O'Brien battalion will actually make the trip remains to be seen.

Racing Victoria's international manager Paul Bloodworth said the Coolmore supremo had indicated he would be bringing multiple horses to run in the carnival despite the difficulties posed by COVID-19 and the restrictions on travel.

The highest-weighted, locally trained galloper is the James Cummings prepared Avilius – himself a French import, although he has been here for several years now. He has 57 in both Cups.

Other horses of interest include the Chris Waller-trained mare Verry Elleegant, who has 55 kilos in the Melbourne Cup, the Joseph O'Brien-trained and Lloyd Williams-owned Buckhurst, who has 55 in both Cups and Team Hawkes Master of Wine (53.5 ).

One of the pre-post favourites Surprise Baby, fifth last year, has 54.5 in both races while Coolmore's globetrotting mare Magic Wand, fourth in last year's Cox Plate and a group 1 winner of the MacKinnon Stakes at Flemington last year, has 55 in the Caulfield Cup.

Aside from the Australasian entries there are potential Cup runners from England, Ireland, France, Germany and Hungary in the shape of Nancho, the former Hungarian Horse of the Year and last start German Group 1 winner, who is already based in Australia with Anthony Cummings. He has been handed 54.kg