Junipal on edge of nominations for group 1 Sir Rupert Clarke

Connections of Toorak Handicap aspirant Junipal will cross their fingers and hope for natural attrition after the last-start winner came up 24th of 24 in the list of nominations for Saturday's Sir Rupert Clarke Stakes.

Just 16 spots will be up for grabs when acceptances close on Wednesday for the $500,000 group 1 and co-trainer David Eustace said the stable was hoping to get into the race to make a step towards next month's Toorak Handicap.

"He'll be on the border of getting in," Eustace said. 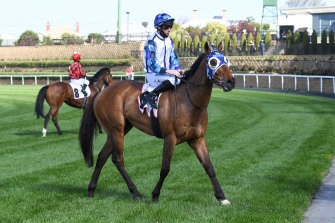 "Hopefully he does but he's going to be right on the edge, isn't he?

"He's obviously come up really well [this spring], he's been racing great and we couldn't have been happier with the way he's been training."

Eustace said the five-year-old gelding would probably have to win another race to get into the Toorak, so there are options next weekend should he miss out on a start on Saturday.

Exciting sprinter-miler Buffalo River also faces the prospect of missing a start in the Rupert Clarke due to his low handicap rating.

Memsie Stakes winner Behemoth is expected to be top-weight in the 1400-metre race at 60kg, with the likes of Streets Of Avalon, Cascadian, last year's winner Begood Toya Mother, Madam Rouge and Superstorm among those guaranteed a start should they wish to run.

Blue Diamond winner Tagaloa is also expected to race in the open-aged handicap, while boom West Australian Showmanship will carry the 54kg minimum weight if he gains a start. Four spots will be left open for emergencies.

Meanwhile, the winner of Saturday's Naturalism Stakes will earn a direct passage into next month's Caulfield Cup.

Shared Ambition, Zebrowski, Orderofthegarter and last year's winner Brimham Rocks are among those nominated for the $160,000 ballot-exempt race, while Eustace said Dr Drill is going well enough to be competitive.

In the group 3 How Now, Diamond Effort and 2019 Blue Diamond winner Lyre are anticipated to clash again following their 1-2 finish in The Heath over 1100 metres late last month.

The nominations also include progressive sprinter How Womantic, a winner of five races from six career starts, however Eustace said the mare was likely to run next weekend instead.

In Sydney however, a small field beckons for the group 1 George Main Stakes.

Chris Waller's Imaging, Star Of The Seas and Kolding are also nominated, along with Doncaster winner Nettoyer.

In The Shorts, at group 2 level, four-year-old Bivouac makes his return to the track after a stellar three-year-old season. The Godolphin spinter is the leading seed for his owner's Everest slot.

The challengers are likely to include New Zealander Catalyst, warhorse Ball Of Muscle, five-year-old Classique Legend, and the Team Hawkes' Dirty Work, who ran third to Gytrash and Nature Strip earlier this month.

Jungle Edge is also nominated, but is unlikely to run if it does not rain.

In the group 2 Tea Rose Stakes, a lead-up to the group 1 Flight Stakes, Dame Giselle will be searching for three wins on end, with Hungry Heart hoping to turn the tables on the rival filly, while New Zealand star Probabeel heads the nominations for the group 3 Bill Ritchie – a key form race for the Epsom Handicap.