India vice-captain Ajinkya Rahane has cost Virat Kohli a fourth Adelaide century and swung the first Test back in Australia’s favour with a terrible mid-pitch call in a dramatic final hour on Thursday night.

The India superstar was in sublime touch and was well settled with his deputy as they approached the second new ball late on the first day’s play of the first pink-ball Test between the teams. 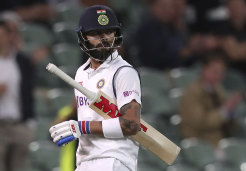 However, just as India had gained the ascendancy they surrendered it inexplicably when Rahane ran out his captain on 74.

Rahane then completed a horror night by burning one of his team’s reviews when trapped plumb in front by Mitchell Starc. India lost 3-18 to finish the evening 6-233.

It was not how Kohli had seen things panning out. Knowing he was only playing one Test in Australia this summer before returning home to be with his wife for the birth of his first child, he had walked out onto Adelaide Oval intent on making it count.

For several hours it appeared he was on track to do just that, ready as he was with an answer for just about everything including a short-ball barrage from Pat Cummins and Starc that at one point drew blood from his thumb.

Having carefully constructed an innings spanning 180 balls, he hadn’t realised the greatest danger would come from his partner up the other end.

Kohli was left in no man’s land as Rahane pushed a ball from Nathan Lyon to mid-off, called “yes” then “no” to his captain, who had committed to the run before being turned back. With Josh Hazlewood firing a straightforward throw to Lyon at the non-striker’s end, the only word left for Rahane to say to a furious Kohli was “sorry”.

Lyon was reminded by teammates of his infamous missed run out in the Ashes thriller at Headingley last year after removing the bails.

“It’s good to be back on the board after the Ashes so I’m pretty stoked with that,” Lyon said.

“Josh ran up to me saying ‘he’s back, he’s back’. There was a bit of banter being thrown around out there.“

The calamitous dismissal meant Australia did not pay too steep a price for potentially letting Kohli off the hook earlier in the day when, with the batsman on 16, they hesitated with a chance to try and remove him via the Decision Review System.

That incident occurred following the tea break after captain Tim Paine had appealed for a catch when Kohli had tried to turn a ball from Lyon down the leg side.

The bowler himself wasn’t as interested as Paine or the nearby Matthew Wade, nor was umpire Bruce Oxenford, who gave it not out, and Paine allowed the DRS clock to count down, opting not to mount a review with third umpire Rod Tucker.

However, replays indicated the ball might have just brushed Kohli’s glove and the Hot Spot thermal imaging technology appeared to show a small mark even if Snicko didn’t.

“From my angle, it was totally out of sight for me. It wasn’t my best ball and I couldn’t hear any noise. It was quite windy out there,” Lyon said.

“We didn’t really hear anything. Wadey said there was a sound and it looked to be in the right area but at the end of the day we weren’t 100 per cent sure about that. And even talking to Virat, he said he didn’t feel anything on his glove. Some days you get them, some days you don’t.”

Paine seized on a later opportunity to remove India’s marathon man Cheteshwar Pujara with a review, ending his 160-ball 43 when an inside edge from Lyon flew to Marnus Labuschagne at leg slip.

Kohli and Rahane, though, still looked on track to make it India’s night until the self-inflicted setback and Rahane’s own exit for 42.

When Hazlewood then had Hanuma Vihari leg-before for 16, India were suddenly on a slippery slope, although Wriddhiman Saha and Ravi Ashwin managed to hold out until stumps to leave the match well poised.

Australia had earlier put the tourists on the back foot immediately when Privthi Shaw chopped the second ball of the match from Starc onto his stumps, lighting up the flashing pink bails that the left-arm quick has been no stranger to setting off.

India were then 2-32 when an outstanding Cummins sent fellow opener Mayank Agarwal packing in the same fashion, bowling him through the gate for 17.

The Australian bowling quartet was assisted by Cameron Green, called “Jungle” in the field by Paine.

Green, who became Australia’s 459th men’s Test cricketer, was picked primarily as a batting all-rounder but was eager to demonstrate what he could provide with the ball with his 198cm frame.

After being brought into the attack with 10 minutes left until the tea break, he put Pujara on notice immediately with a short ball the No.3 fended to short leg but was so excited he had overstepped and was called for a no-ball.

Green impressed in his first outing, however, regularly tipping over the 140kmh mark, keeping the pressure on the batsmen and taking it off Australia’s other bowlers.