Roubaix, France: Sonny Colbrelli became the first Italian to win the Paris-Roubaix classic in 22 years when he survived wet, windy and treacherous conditions to prevail on his debut in a three-man sprint finish at the end of a gruelling race on Sunday.

Colbrelli burst into tears as he collapsed on the grass of the Roubaix Velodrome after triumphing in the first rain-hit edition of the ‘Hell of the North’ since 2002. His whole body was caked in mud after the 257.7 kilometre Monument, which featured 55km of jarring cobbles divided between 30 sectors. 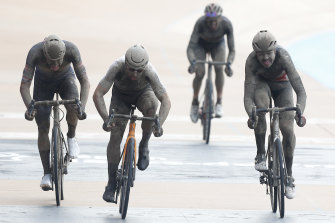 Sonny Colbrelli wins a three-man sprint from Florian Vermeersch and Mathieu van der Poel. Gianni Moscon (rear) had been poised for victory before a puncture and crash. Credit:AP

Paris-Roubaix is a one-day race but carries the same level of prestige as the Tour de France and riders, who on Sunday could not hide their pain and suffering in the conditions, go deep into the red zone just to be able to say they finished. 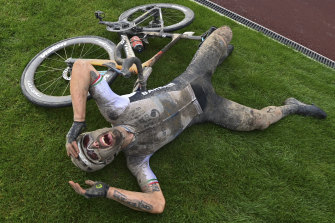 Of the 174 men who started the 118th edition held around World War memorials in northern France only 94, including four other Australians, finished within the time limit. Ten insisted on reaching the velodrome, with 22-year-old Tom Wirtgen of the second-tier Bingoal Pauwels Sauces WB team the last of them to ride in. He cried on arrival. The rest did not finish.

“The last 5km, I cried more than during the last two years of my life.”

Van der Poel, one of the pre-race favourites, came up just short after doing most of the work in a small group chasing Italian Gianni Moscon, who seemed to be heading to victory before a puncture and late crash ruined his chances.

Moscon (Ineos Grenadiers) eventually finished fourth, 44 seconds off the pace, leaving his compatriot Colbrelli to become the first Italian to win since Andrea Taffi in 1999. 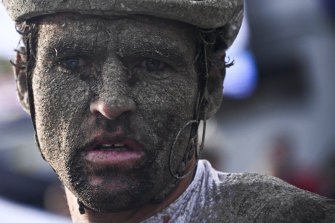 “Today is a legendary Roubaix with the rain and the weather at the start and an attack with 90km to go after Arenberg,” said Colbrelli.

“I followed only van der Poel in the finale and in the end I had a super sprint. I was at the limit in the finale. It was super difficult because I had to pay attention for the crashes from the first sectors and then there’s always the stress to be in position on the cobbles. This year is my year, I’m very happy.” 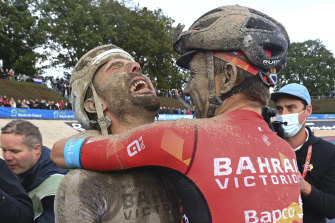 Van der Poel, who was also making his debut on the Paris-Roubaix in the first edition since April 2019 after the COVID-19 pandemic prompted organisers to put off the event, matched his father Adrie’s podium finish from 1986.

Colbrelli spent most of the day tucked into van der Poel’s slipstream and when the final sprint on the velodrome loomed, the Italian was the freshest man.

It long seemed, however, that Moscon would be celebrating a solo win.

Moscon pulled away from a leading group in the cobbled sector of Auchy-lez-Orchies to Bersee 49km from the line as the sun pierced through the clouds and the drenched roads started to dry.

Powering his way through the thick mud, Moscon extended his advantage over the van der Poel trio to 1:25 as highly touted Belgian Wout van Aert faded away. 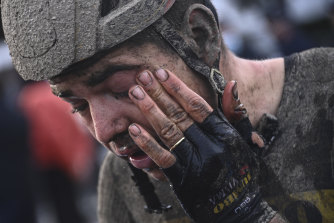 Belgian superstar Wout van Aert wipes mud from his eyes after the race that conditions made treacherous. Credit:AFP

With 38km remaining, Vermeersch and Van Asbroeck were reined in by van der Poel and company and the newly formed group organised the chase behind Moscon.

Moscon lost some 30 seconds with a flat rear tyre that prompted a bike change 29km from the line with the chasing quintet reducing the gap to 45 seconds.

It fell to 15 seconds after he crashed on a muddy patch, but he stayed just clear as Boivin crashed in the group of chasers in the cobbled sector of Camphin en Pevele.

He was, however, caught and dropped 16km from the finish in the Carrefour de l’Arbre as Colbrelli, van der Poel and Vermeersch went clear to contest the final sprint. 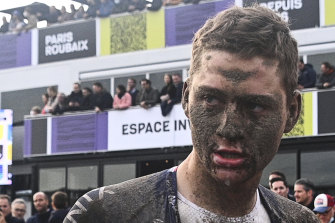