Neser stars with five, Green among the runs in Shield

Boom Western Australia youngster Cameron Green missed the chance to stake an early Test claim on a day the country's pace bowling depth was on show.

Queensland seamer Michael Neser gave selectors another reminder he should be considered the best of the rest behind the big four quicks with a five-wicket haul on the opening day of the Sheffield Shield season.

Young spin sensation Lloyd Pope also collected a bag of five but fellow leggie Mitchell Swepson was arguably the more impressive of the duo despite just the one victim to show for his toil. 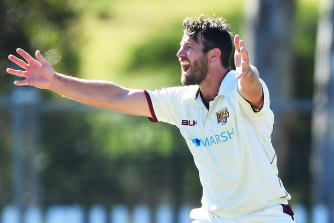 Michael Neser on day one of the Sheffield Shield match between Queensland and Tasmania. Credit:Getty Images

Australia's top six is all but picked for the first Test but Mitchell Marsh's ankle injury has left the race open in the all-rounder's stakes.

With a pink-ball game first up against India, Australia is unlikely to need a bowling option in the top six until the series likely heads to Sydney for the third Test.

Green, coming back from stress fractures in his back, is unlikely to bowl until the later rounds in the Adelaide hub but underlined his ability with the bat with a half-century against South Australia.

Batting at No.4, Green hit 56 off 119 balls but played all around a delivery from Pope which straightened off the pitch and trapped him plumb in front.

In just his sixth first-class game, 20-year-old Pope is a long way from the finished article and struggled with his control on Karen Rolton Oval.

Though expensive at times, the redhead also has tricks in the bag, as Cameron Bancroft found out when he was deceived by drift and bowled nearing lunch.

If Pope wanted lessons on accuracy, he should get a tape of Swepson plying his craft at the nearby Park 25.

Swepson finished with 1/68 from 27 overs, his ability to play a defensive role allowing Bulls captain Usman Khawaja to attack with his faster men. This was a display which should reaffirm to selectors his standing as Australia's next slow bowler should Nathan Lyon be unavailable to injury.

As he has done in recent seasons, Neser proved a handful for Shield batsmen with his accuracy and subtle movement off the seam.

He claimed three wickets before lunch then returned to blunt Tasmania's lower-order fightback by dismissing Peter Siddle, on debut for his new state, for 33.

Neser has been on the fringe of the Test side for two years now but has not been able to break through for a baggy green behind Pat Cummins, Josh Hazlewood, Mitchell Starc and James Pattinson.

The Bulls were 0/7 in reply to Tasmania's first innings of 250 at stumps on the first day, while WA were 5/290 nearing the close of play.