Pagan’s big chance for Melbourne Cup shot is here, but will he take it? 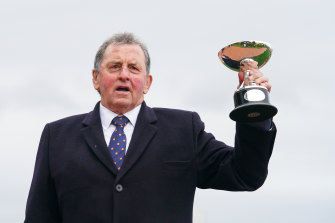 Danis Pagan will decide if Johnny Get Angry takes a Melbourne Cup berth based on the horse’s run in the Geelong Cup.Credit:Getty Images

But with very few internationals in Melbourne this year, the Geelong Cup is an all-local affair, headlined by Pagan’s VRC Derby winner.

“Johnny” has been guaranteed a Melbourne Cup start since last year’s storied group 1 victory, but that’s not something Pagan is taking for granted, acknowledging the horse will have to improve his form to warrant taking his place in the Melbourne Cup.

His first two starts this preparation, over 1200 and 1600 metres, were well short of his best trip, but Pagan said the horse had excuses at his most recent start in the Turnbull Stakes when he finished 29 lengths last.

“You’ve just got to forget about the Turnbull; he trod on a nail and his blood was no good as we found out the day after the race,” Pagan said. 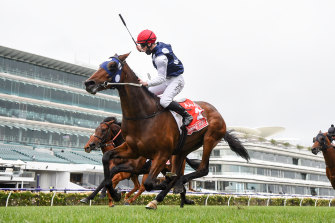 “You’ve just got to put it down to that.

“Apart from that, everything else was a pass mark. His work’s been good, so I’m just hoping for the best tomorrow. I think he’s in pretty good order.”

Johnny Get Angry’s pet distance was always going to be over a mile-and-a-half and further, and Wednesday’s Geelong Cup will be only the second time he gets out to the trip. Pagan said that had to be taken into account.

“That’s his best distance range, from here on in. There are a lot of things in his favour,” Pagan said.

But what Johnny Get Angry is doing at home in track work will be irrelevant if he can’t prove competitive on raceday.

“His work’s been very good, but I learnt a long while ago in a different spot, track work and training is like dancing with your sister,” the AFL premiership coach said.

“If he doesn’t run well tomorrow we won’t be going to the Cup but if he runs well, I’d be mad not to. I might never get in this position again, so I’ll take my chance, I suppose.

“You’ve got your fingers crossed and hope he puts his best foot forward. I can’t pick any holes in his preparation. He looks well, he’s working well, touch wood everything stays that way.”

Symon Wilde’s Bart Cummings runner-up Tralee Rose is the $2.60 favourite in Wednesday’s Geelong Cup, ahead of Herbert Power placegetter Hasta La War ($6.50). Johnny Get Angry is one of the rank outsiders of the race at $61.

The Geelong card also includes the Geelong Classic, a key lead-up race to the Derby, where Kiwi galloper Tutukaka – who ran fifth last start in the Super Impose behind El Patroness – is a $4.80 favourite.