Former Test captain Tim Paine is taking leave from all forms of cricket, casting doubt over his availability for the start of the Ashes in less than two weeks.

The wicketkeeper had been picked to play in Tasmania’s one-day game against Western Australia, which was to be his first game of state cricket this season after undergoing neck surgery. 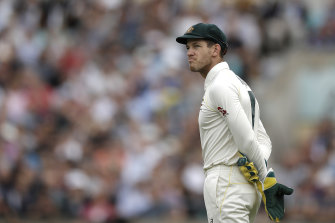 Former Australian captain Tim Paine is taking a leave of absence from the game.Credit:Getty

The first Test is due to start in Brisbane on December 8.

“Following discussions over the last 24 hours, Tim Paine has advised Cricket Tasmania that he will be taking a leave of absence from all forms of cricket for the foreseeable future,” Cricket Tasmania said in a statement released on Friday morning.

“Tim’s decision makes him unavailable for selection for today’s Marsh One-Day Cup match against Western Australia. His place in the squad will be taken by Charlie Wakim.

“Cricket Tasmania will continue to support Tim and his family both professionally and personally over the summer.”